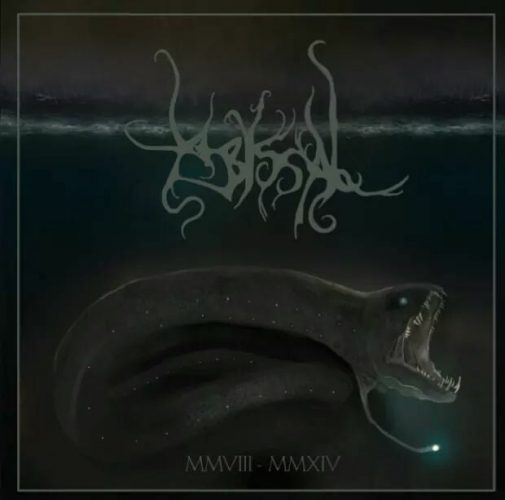 (In this post Grant Skelton reviews a new anthology release collecting the music of the Mexican funeral doom band Abyssal, and shares news about Abyssal’s next album.)

“What are we? We live in the dark, everything we see it’s not what it appears to be. We are blind to this world, we are blind amongst ourselves, we live afraid. It is out feat that brings us to commit horrendous acts towards everything that surrounds us, fighting anger with anger, blood for blood. It’s our fear of finding out we are fragile and weak. Human figures on beautiful landscapes that is all we see, for we live in the abyssal plains… Music to be the companion on those long struggles for a better world, doesn’t matter the sound, when melody and meaning come together we feel we are not alone, there’s someone beside us fighting the same fights.”
(From the MMVIII – MMXIV liner notes)

Tijuana, Mexico is the home of Abyssal, a funeral doom band whose upcoming 2018 album (more info on that later) should be on our radar. Although active for a decade, word about Abyssal seems scarce even in dedicated doom circles. Their first 2 albums (Blindness and Landscapes) had only been available on CD-R prior to this year. Thanks to Concreto Records, fans may now enjoy a proper physical release of those two albums as part of an anthology called MMVIII – MMXIV. Rounding out the anthology is Abyssal’s 2014 track “Ad Noctum”.

MMVIII – MMXIV serves as a proper introduction to Abyssal’s wistful breed of funeral doom. Gonzalo Rueda’s gorgeous (albeit monstrous) artwork christens the front of the album. Each track, roughly 20-25 minutes in length, gives the listener over an hour of somber tranquility. Abyssal favor long, intimate instrumental movements in their songs. Ominous melodies, inspiring both dread and comfort, lull the listener into a sullen trance. Vocals are typically concentrated to the center of each musical movement. Furthermore, the tracks move backward, beginning with the most recent composition. This order makes it easier for the listener to notice the nuances in Abyssal’s development over their career.

Rather than crushing the listener’s soul (to use modern doom parlance), Abyssal instead call the listener to descend down into silent darkness. A precipice so profound that the dark inspires blindness. That’s the place this music will take you to. A place that might, at first glance, appear a bit melancholy. But after spending time there, this hidden cavernous depth becomes a respite. A hallowed sanctuary from the hooks and barbs of modern living. Obligations cease. Time implodes. And the listener is left only with awe — the awe of absolute stillness. This, friends, is the realm of the bottomless sea. Abyssal is a band that manages to expand and improve with each successive release.

If you like what you hear, you can buy Abyssal’s entire digital discography, including their 2015 album Anchored, for only $9. For physical copies of MMVIII – MMXIV, visit Concreto Records.

To conclude, I’m privileged to share some news on Abyssal’s upcoming album! Vocalist Fernando Ruiz informed me that the new album Misanthrope consists of a new 40-minute composition and will see release in the summer via Concreto Records. For more information, follow Abyssal on Facebook.