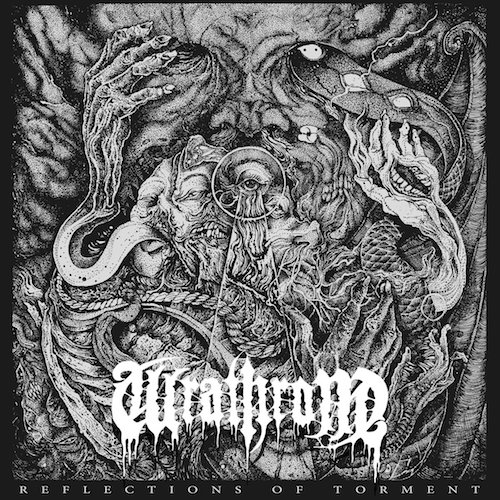 I’m not sure what first set in motion the trend in certain strains of death metal for bands to adorn their music (and their lyrics) with imagery of women being sexually violated, tortured, and brutally murdered, or when that started, or why. Undoubtedly, metal historians have investigated… but I haven’t.

The Wrathrone video you’re about to see is in line with that trend… up to a point… and then it ends in a way you wouldn’t see coming (except now you’ve been alerted), because this particular victim returns from a watery grave to mete out vengeance.

It appears from the video that death doesn’t succeed in claiming Wrathrone either, given their own gore-splattered appearance as they hammer out the delicious piece of death-metal mauling and romping that provides the soundtrack to the short film.

The song is “Throne“, and it appears on the band’s new album, Reflections of Torment, which will be released (CD and digitally) on April 23rd by Satanth Records (Russia) and The Void Records (Italy), with vinyl and tape editions projected for release in September by Cimmerian Shade Recordings. 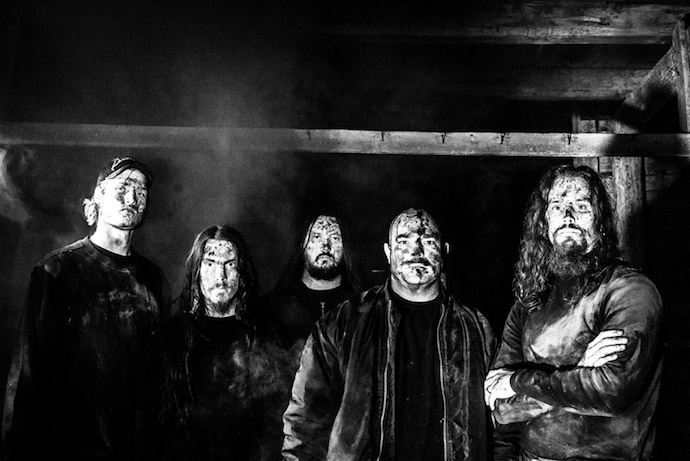 For those who might be encountering Wrathrone for the first time, they came together in Finland in 2008 and so far have released a pair of EPs (Burning Hatred in 2011 and Left Unburied in 2013) and a debut album (2016’s Born Beneath), and have honed their murderous skills over the course of about 70 shows in multiple countries.

You’ll get a hint of the brand of death metal these barbarians prefer by gazing (longingly) at the new album’s cover art, created by Pierre Perichaud of Business For Satan. And you’ll get a further vivid sign by listening to “Throne“.

It becomes obvious from the track that Wrathrone have embraced the deathless old school stylings of such bands as early Entombed, Bolt Thrower, Dismember, and certain progenitors from the Finnish death metal pantheon. The double-guitar attack discharges beefy, chainsawing riffs that wrap themselves around the reptile part of your brain; the rhythm section brings a grooving drive that just as effectively takes command of a listener’s motor neurons; and the vocalist delivers the kind of deep, heartless growls that call to mind images of a brutal serial killer.

I suppose it goes without saying, from what I’ve already said, that the song is as communicably infectious as it is ghastly. If you have a taste for old school death metal of the kind launched by those names mentioned earlier (and I sure as hell do), I can pretty much guarantee you’ll eat this up with both hands.

Devote yourself to “Throne” below, and you can also check out the previously released track “Bloodshroud“, which is a free download at Bandcamp.

One Response to “AN NCS VIDEO PREMIERE: WRATHRONE — “THRONE””