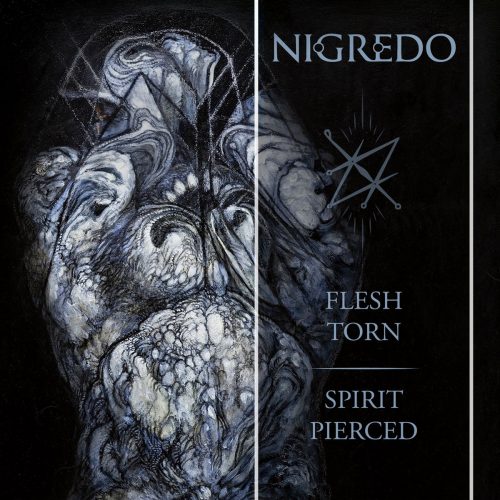 As I explained at our site about 10 days ago when I first encountered excerpts from the album that’s the source of the following premiere, “nigredo” (or “blackness”) was an alchemical practice that referred to the process of putrefaction or decomposition, a method of cleansing alchemical ingredients by cooking them to a uniform black matter. Because that word encompassed the process of death, putrefaction, or blackening, it also came to have symbolic or metaphorical usages in psychology and in certain spiritual studies as a necessary step in a new beginning.

Nigredo is also the name chosen by an Athenian black metal duo — vocalist, guitarist, and bassist A. (Ravencult) and drummer Maelstrom (Dephosphorus, Embrace of Thorns, ex-Ravencult) — whose debut album Flesh Torn – Spirit Pierced will be released on April 15 by Transcending Obscurity Records. As the band themselves explain:

“Saturnian forces rule over the Flesh Torn – Spirit Pierced album and so, as the title implies, one should expect both physical extremity and mental violence manifested. Driven by our abstract vision of material and mental dissolution, we erased all traces of positiveness from the album’s content, so rejoice in the collapse of all known things through feelings of total negativity and anguish.”

Before today you could listen to four tracks from the album on Bandcamp, and what you would find there is enormously impressive music — a devilishly ingenious and powerfully executed blend of strange, dissonant melodies, ripping riffs, eye-popping rhythmic changes, and boiling vocal madness. One moment Nigredo indulge a taste for murderous rampaging; the next they’re filling your mind with hallucinatory fog; the next they’re rocking out so hard that your head can’t help but move like a pumping piston.

I found those four tracks (and ultimately the rest of the album) so vibrant, so supercharged with infectious energy, so uncaged in its riveting twists and turns that I imagined being swept up by Nigredo and carried away into the midst of the Wild Hunt. Their mission may be to putrefy and cook us down to some core of death-like blackness, and negativity may have fueled the work, but these raging tides of sound strike me as explosively alive. The song we’re premiering today — “Ten Repellant Antiforces” — is a prime example of this sensation.

The track is indeed a wild hunt — super-heated, blood-rushing, venomous, slaughtering… and its terrific vibrancy is irresistible. It surges out of the gate in a flurry of vicious, seething chords and battering, blasting drumwork, but also delivers vivid thrashing and slashing riffs, bursts of blaring, dissonant arpeggios, lightning-fast frenzies of melody, and eruptions of double-bass as well as head-hooking back-beats. The vocalist’s tyrannical snarls and livid screams add further heat and ferocity to this ripping ride.

The album features a cover painting by Jean Francois Bouron, and layout design by Remedy Art Design. You can pre-order the album via the link below, where you can also enjoy more tracks from the album.

One Response to “AN NCS PREMIERE: NIGREDO — “TEN REPELLANT ANTIFORCES””