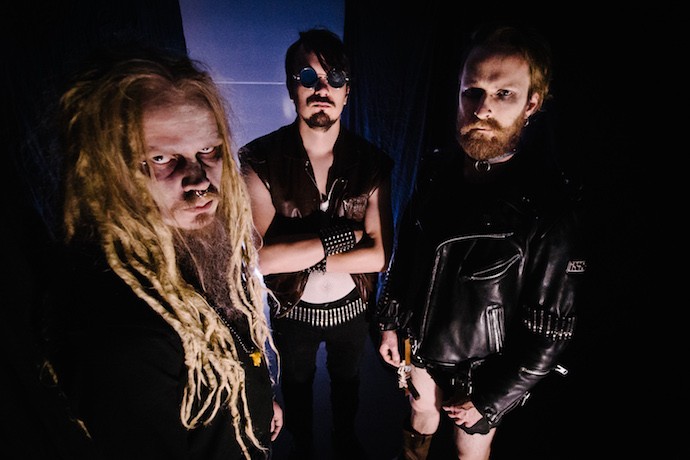 With a history that can be traced back to 1998 and a sound that has evolved over the course of a demo, a previous EP, and a 2016 album (Phanerosis), the Finnish black metal band Black Mass Pervertor have reached an apotheosis of devilment with their new EP, Life Beyond the Walls of Flesh.

It’s a fiendishly infectious romp that, in the accurate words of the public relations campaign paving the way for its release, bows reverentially to “Belial, Barathrum, and especially early Impaled Nazarene whilst nodding to the early-Noughts work of Horna, Sargeist, and Behexen.”

It has, in short order, become a deliciously deviant pleasure of mine, a pleasure I get to share with you today in advance of its release by Blood Harvest Records on Friday the 13th of this month. 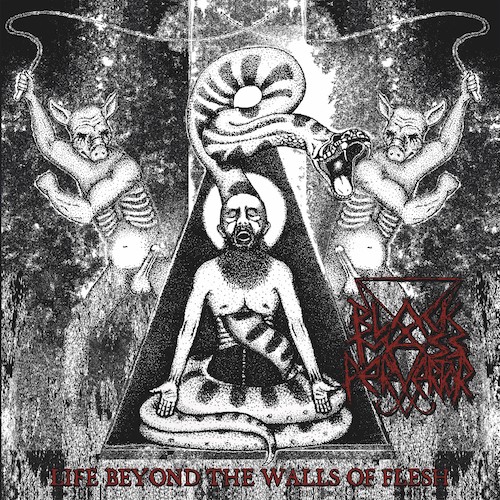 Black Mass Pervertor don’t waste time, serving up seven tracks in slightly more than 19 minutes. They also don’t engage in any stultifying pretentiousness. This is thrusting, lusting, fire-and-brimstone fun that’s as infectious as a sexually transmitted disease for which medicine has thrown up its hands in defeat.

Part of what makes this EP such a fiery blast is the work of the rhythm section, who just seem to have an intuitive grasp of what makes people want to move without even thinking about it. There’s a nimble bassist at work here, stirring a cauldron of deep, bubbling low-end tones, and an inventive and acrobatic drummer whose rhythms and progressions are rarely stuck in the same place for long at a time (and he launches into full-on blasting only rarely).

The songs also feature a full complement of ingenious devil riffs, abrasive enough in their distortion to provide a feeling of filthiness, but not so corrosive as to leave ear drums in tatters. Such nasty, vibrant music wouldn’t be the same without the vocalist’s vicious, flesh-scarring howls and livid yells, and when you add them into this poisonous mix, they give the music an edge of orgiastic madness and blood-thirsty savagery.

The opening track, “Imbibing the Seas of Darkness”, proceeds at a mid-paced gait, and the song’s ominous, pulsating chords give the track an atmosphere of lurching horror. But after that, the EP becomes a hellish romp all the way up to the closing track (“The Forbidden Path”), where the band alternate slower moments of dread with passages when they catch fire again.

“The Golden Spears” is a burst of visceral vibrancy that gallops and blasts, with a scissoring riff that swings, while “Suffering, Our Everlasting Bliss” moves at a loping gait on the back of a head-nodding rhythm, but then surges into a rumbling, neck-snapping race; there’s a sense of whirling, bounding freedom in that song, but it also gives off an aura of infernal menace.

The infectiousness doesn’t stop there. “Unorthodox Methods of Magick” is propelled at first by hard-rocking, heart-pumping rhythm work and blaring, fanfare-like chords laced with a sensation of arcane peril — but the song ultimately becomes savagely wild (and hallucinatory at the end). The short follow-on track, “Behind All His Atrocious Deeds” is another pulse-pounding rush, with a feral, punk-like energy but also an air of grim threat that comes through all the romping and ripping.

And “Chains of Guilt” might be the catchiest track of all, thanks to a head-hammering rock beat and thrusting chords that might make you think of sweat and blood flying off cavorting bodies in the throes of ecstasy.

I certainly hope you get as much of a charge out of this EP as I have. If you like what you here, you can pick it up in a variety of formats via the first link below.