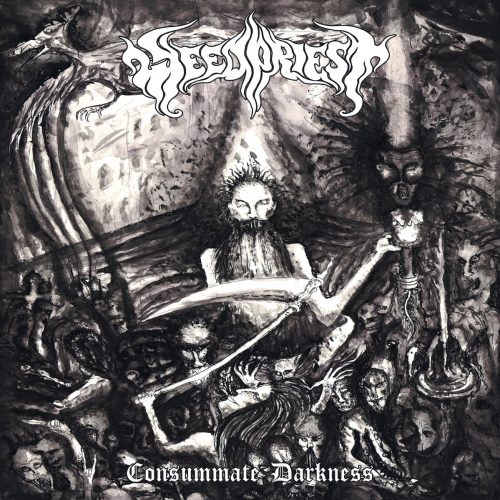 (DGR prepared this review of the latest album by Weed Priest from Galway, Ireland.)

I’ve been hinting at writing this one for a very long time — considering that this album hit on October 31st, 2017, and I didn’t mention it other than to say I was looking into it in December. In the annals of reviews of mine that I have deleted and restarted numerous times, this one has to be up there. Considering that we’re now in early April, the album is very much up there as one of the ones it has taken me a very long time to forge ideas about.

Put simply, it’s because I am not the doom guy around here. Your doom expert around these parts is our very own ruler of the early morning post Comrade Aleks. Not only has he put together a near-ceaseless and well-constructed series of interviews with different musicians across the genre and issued them here (and elsewhere) for some time now, but he has also written a tremendous book.

So he’s your doom expert, and I am a sufferer of severe-imposter syndrome whenever the genre is brought up. It also does not help that in the great deep chasm that is the doom divide, I am more likely to go with the doom groups that are effectively melodeath bands, endlessly dramatic and playing slower — more likely to conjure visions of frozen lakes and snow-covered landscapes than the epic-length journeys that lend themselves more to smoke-filled rooms and endless walls of distortion and reverb.

That doesn’t mean I don’t cross those lines though, and occasionally a band will break through my “pretty euro-doom” bubble. By sheer force of just being the most blatant about which altar of doom they worship at, Ireland’s Weed Priest (whom I have covered briefly before) have managed to do so, and lately it’s been their four-song, forty-minute release Consummate Darkness. 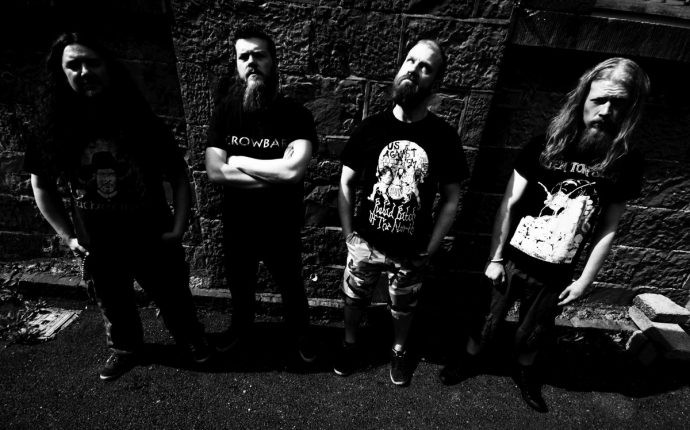 Even though each of the songs present on Consummate Darkness averages out to about ten minutes, at four songs total there still exists something of a spoiler-averse wariness in reviewing the disc, because the that face-value number makes everything seem compact. It’s not, obviously; around forty minutes is definitely a full-length disc.

There’s also the fact that we don’t need to worry about ruining any surprises for you here because Consummate Darkness sounds EXACTLY like how one would imagine it might sound after glancing at the band’s name and the album art. Rarely is there a disc out there where the artwork maneges to perfectly encapsulate exactly what is going on in the album, but Consummate Darkness is one of those. One glance at the haze-distorted creature on the cover and the band’s name and you know automatically that this is going to be some distortion-worshipping, reverb-enveloping, occult-obsessed doom.

Of the four songs present, three of them — “Witch’s Curse”, “Vampyr”, and “The Mass” — move at the classically defined glacial pace and easily get into the upper reaches of the ten-minute plateau. The one faster-moving song is the six-and-a-half minute “Sky Daddy”, so that should give you some idea of what faster-moving means in comparison to much of Consummate Darkness.

The occult-obssession evident throughout the whole disc becomes a main driver of “Sky Daddy”, though it suffers a bit from the Devin Townsend “Lucky Animals” syndrome, in that the one part that really sticks into you is the three-syllable main refrain of the whole song, so that the words “Sky Dad-Dy” set to the song’s bouncing bass guitar rhythm seem to drill into your skull.

The song pops up after nearly twenty minutes of slow movement and crashing through smoke-haze, and spills into the album closer, which gives Consummate Darkness the feel of a forty-minute movement of songs rather than tracks that are truly seperate from one another. Vocalist Adam Diavol howls his way across the whole album but is brought most to the forefront during “Sky Daddy” in particular, where on the rest of the disc he finds himself buried in the waves of sound emanating from his fellow bandmates as well as his own guitar.

“Witch’s Curse” and “The Mass” serve as the bookends for Consummate Darkness and color how the disc flows as a whole. “Witch’s Curse” lays the foundation and blueprint for how each song will move — from the “demonic” movie sample openings that grace a few of the songs, to the crashing pace with which each lumbering beast moves itself around on the album. “The Mass” benefits particularly from that, as each song on Consummate Darkness lends some sort of element to it; the track creates a gigantic fourteen-minute journey of its own — which somehow manages not to feel like fourteen minutes at all by the time the song wraps up.

It helps that “The Mass” seems to be divided into three particular segments as well, which gives it a cinematic feel. The closing segment is so terrifyingly strong that it becomes the highlight of the whole song. One of the weirdest sentences you might ever get the opportunity to type in a review is “the best part of the song is the end”, yet the last six minutes of “The Mass” — effectively the closing movements — send the track out on such a high note that follow-up listens feel like a slowly building hype-meter just to get back into the ending movement again. There is where the band give themselves fully over to the bluesier-doom worship of their chosen genre and break out the the strongest grooves they could muster, layering on a noisy guitar lead that comes screeching in on top of the closing melody and making the last bits of “The Mass” feel absolutely climactic.

Yes, everything you need to know about Weed Priest is spelled out for you on the cover. This is one of those albums where you know exactly what you’re going to get by one glance at it, and the ensuing enjoyment comes from a masterful execution — which Weed Priest achieve throughout the whole of the disc. There’s no pretense involved, instead just a sense of “oh, they know what they’re doing”, as each bass-heavy low forms a rumbling bedrock to each passing minute of Consummate Darkness.

We’ve often featured bands over the years with many a black-and-white photo of their members on stage shrouded in fog-machine haze, or enough smoke that you can just barely make out whatever weird contortion the guitarist has bent himself over into, and Weed Priest are one of those groups that sound exactly like such photos look. They’ve taken distortion and turned it into a fog that shadows over the eyes of its listeners, giving an otherwordly sense to the passage of time, making it difficult not to become enveloped in the crawling movements as they paint pictures of demons, witches, and whatever imagined goblins might be haunting the protagonists therein.

Consummate Darkness is functionally about as stoner-doom as one can make it, and Weed Priest accomplish that goal excellently.

Consummate Darkness was released through, and is available from, Cursed Monk Records: