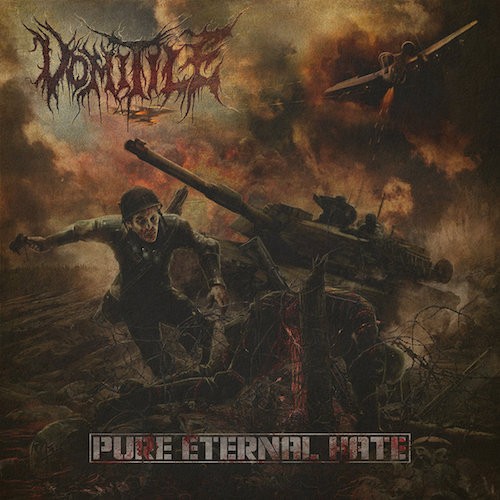 Vomitile hail from the Mediterranean island nation of Cyprus, which they’ve turned into ground zero for their own detonations of hard-charging, war-like death metal since 2007. Over the last decade they’ve released an EP and two full-lengths and performed live with such blood-thirsty luminaries as Sodom, Kreator, Obituary, and Vader, and toured with the likes of Master and Onslaught. Now they’ve got a third album — Pure Eternal Hate — ready for imminent discharge via Satanath Records and the Spanish label Hecatombe Records. It will be upon us on April 18th, but today we’ve got a sample of the punishment it will deliver through our premiere of a lyric video for one of the new songs.

Vomitile have a taste for thrash as well as eviscerating death metal, and so this new song, “Labeled Dead” is a high-octane ripper that gets the blood pumping and the body moving. 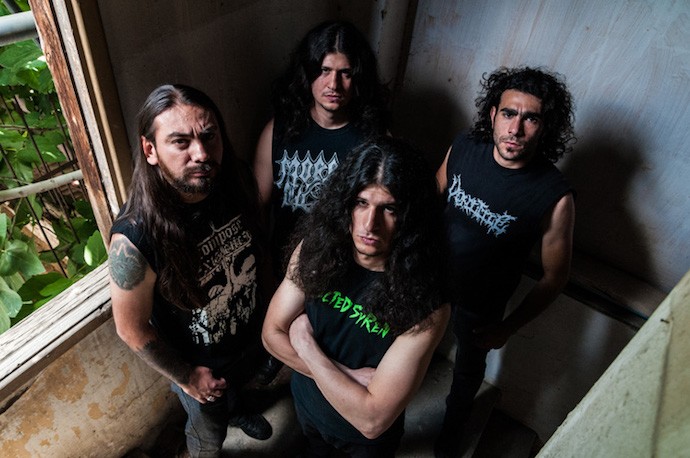 The music is fast and explosive, but machine-precise in its delivery of annihilating barbarism. It rushes ahead like an accelerated tank attack right from the start, delivering a mix of seething, jolting, and rapidly darting riffs, plus fusillades of galloping, hammering, and bullet-spraying drumwork. Thunderous bass lines add to the spinal trauma inflicted by the track, while the growled vocals are downright rabid in their viciousness.

It’s a compact attack that Vomitile launch in this song, but nonetheless one that’s very effective in putting the spurs to the listener’s pulse rate.

Pre-order links are below, and we’ve included the stream of a second track, “Carnal Surgery” (which is a free download at Bandcamp) along with our own premiere of the video for “Labeled Dead“.