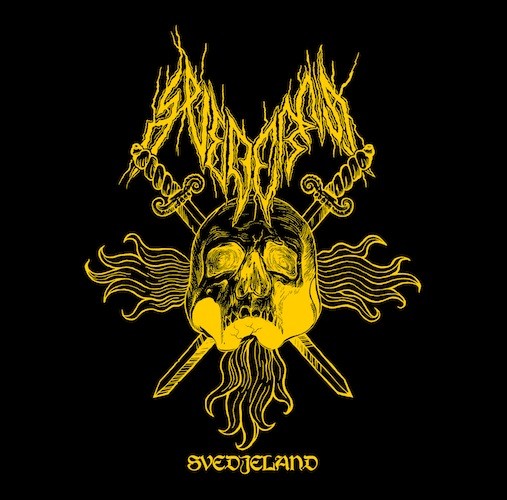 If you put lyrics aside, which is not difficult to do when they are in Swedish and you’re own meager understanding is limited to English, the emotions conveyed by a human voice in the throes of intense expression become subject to changing interpretations, depending on the music behind it. That thought occurred to me (though not for the first time), as I listened to the new album by the Swedish black metal band Svederna, which will be released this Friday (April 20).

J. Holmberg’s burning howls, savage shrieks, and raw-throated yells are undeniably intense, a full-force outpouring of emotion. But the emotions the listener feels may change dramatically depending on what his talented bandmates are doing behind him. They can be heard to convey violent fury, or terrible anguish, or wild cries of defiance, simply because of how the music changes. Of course, he does his own part to change the mood, too, especially when uttering spoken words in somber tones.

And the moods do change across the eight songs on Svedjeland. Indeed, they change within every song, because Svederna are obviously interested in, and quite adept at, crafting their vibrant brand of melodic black metal with alternating ingredients and energies. 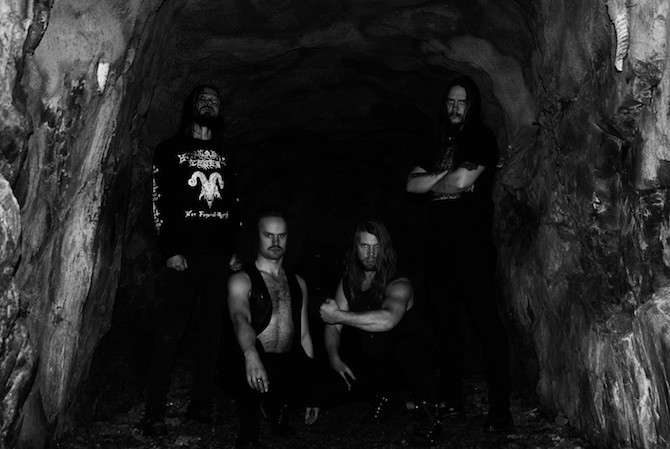 We’re told that Svederna considers central Sweden to be its home, with members who reside both in the city and in the wilderness. And apart from the changing moods of their music, the songs also do seem to move atmospherically between distant forests and urban landscapes — not even from song to song, but in the course of single tracks, as if we’re being pushed and pulled by the attractions and perils of each setting, torn between them.

The album opener “Branda Jordens Taktik” provides an immediate example of what the rest of the album will deliver. The drum rhythms move from a ritual beat to a double-bass fusillade, from an off-kilter, punk-like kick to a blast-beat strafing run, from a rocking back-beat to a pounding jolt. Meanwhile, the riffing pulsates with fiery energy, races, or jabs, while the song’s melody whirls in a dervish-like dance and soars in heart-swelling fashion.

Elsewhere, the band create music that’s bleak and brutal in its resonance, but that comes alive with a darting, head-moving lead (“Moratorium”), or that delivers a ripping, racing, black-thrashing barbarism (“Slokum”). Even the most incendiary songs are edged with melancholy, and on occasion the band really dive deep into despondency; “Do I Tid” surges, but then becomes heavy, staggering, and grief-stricken, the guitar lead singing a slow, shining lament.

The moving (and often bleak) melodies often have a folk-like air about them, as if drawing inspiration from rural towns and wintry forests, yet just as often, darting leads, thrashing riffs, and punk rhythms pull the music over into city streets. And it’s not unusual to find this kind of movement occurring between the start and finish of an individual track, just as it’s not unusual to find Svederna lighting fire to your pulse rate one minute, and turning your outlook to one of brooding or despair the next. They surge toward epic heights as well.

The one thing that doesn’t change across the album is the vibrancy and passion in the music. It comes through quite clearly; with everything else I’ve attempted to describe, it makes the album a very satisfying experience. But of course you can judge for yourselves, because the point of this review is to introduce our stream of the complete album.

Svedjeland will be released on April 20 by Carnal Records, and pre-order links are below.

We’ll also mention that to support the new album, Svederna will embark on the mini-tour Under Spirande Skyar 2018 (“Under Burgeoning Skies 2018”) together with the superb black metal band Grift [Nordvis Records]. The tour kicks off at The Abyss in Gothenburg on May 17th, continues at Plan B in Malmö on May 18th, and wraps up in the countryside hostel village of Tivedstorp on May 19th at Stallet.

Svederna are also confirmed to perform at the Swedish metal festival Gamrocken on May 26th. In these performances they will be joined by live members P. Stille (Stilla, Bergraven) on guitar and S. Frödeberg Karlin (Verminous, Sgt. Carnage) on bass.

6 Responses to “AN NCS ALBUM PREMIERE (AND A REVIEW): SVEDERNA — “SVEDJELAND””