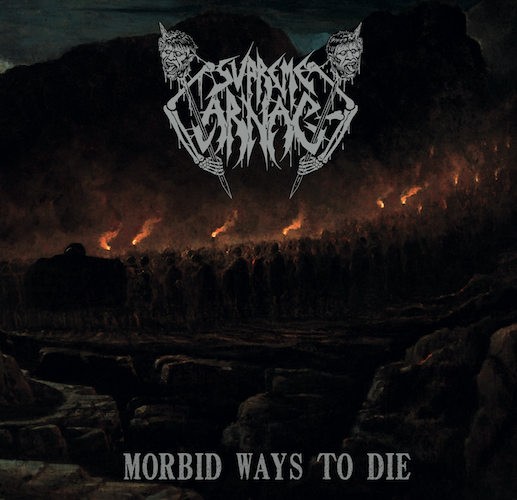 This German old-school death metal band, who have taken their prime influences from the likes of Gorefest, Entombed, Bolt Thrower, Asphyx, and Bloodbath, have already discharged an impressive discography, which includes their 2013 debut album Quartering the Doomed and 2015’s Sentenced By the Cross, but on their forthcoming third record — which of course is entitled Morbid Ways To Die — they sound like they’ve reached a new zenith of audio slaughtering.

The first premiere from the new album (“The Fire Prevails”) was launched at DECIBEL, and we’re very happy to be the bearers of the second one through a lyric video — which is the album’s striking title track. 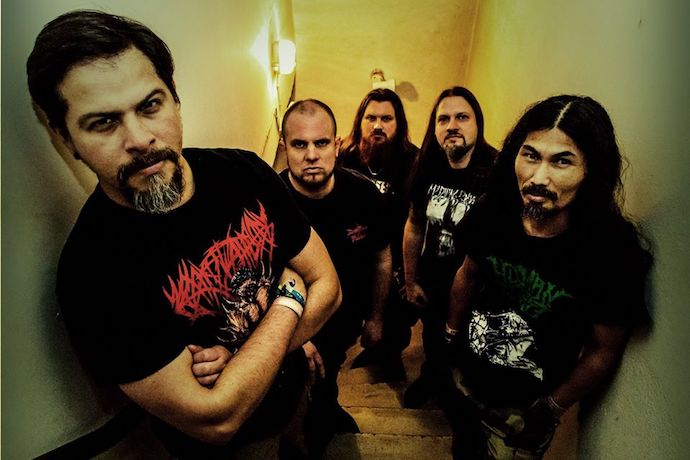 There’s so damned much to like about this song. We can start with the vocals, which are monstrously ravenous, belched forth from a throat that sounds clotted with blood and gristle, and yet do a fine job enunciating the gruesome, well-crafted lyrics (and you gotta love how he pitches his voice for added emphasis in certain lyrics so that it sounds like a panther in the throes of ecstasy).

In addition, the deep, grinding riffs have a massive, mauling tone, and are even more titanic when the band shift into bursts of rhythmic jackhammering. On top of that, the skull-plundering drum-and-bass work is terrifically compulsive, as in, they compel head movement.

But at least as vital, this obliterating tank attack is an actual song, with structure and dynamic movement — and actual melodies in the chorus that send the music soaring to heights of morbid glory. And to add a further electric charge to the song, there’s a hell of a fine guitar solo in it as well.

Additional vocals both on this song and the first premiere were performed by Bernd of Slaughterday. The cover artwork is based on an 1848 painting by Francis Danby called “Funeral Procession”.

Pre-order the album from Redefining Darkness or Raw Skull Recordz via the links below, and be sure to check out the “The Fire Prevails” in addition to the title track we’re bringing you. We’ve made that easy to do.