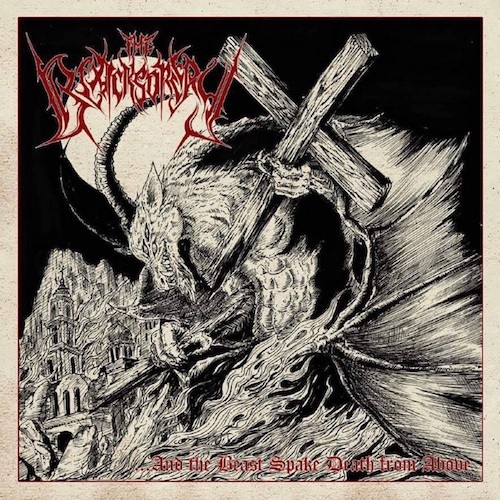 The annals of black/death war metal are filled with other Canadian bands who have done a damned fine job converting the quivering minds of listeners into shattered wastelands. But while The Black Sorcery are certainly indebted to their countrymen in such groups as Blasphemy, Conqueror, and Revenge, they aren’t clones, and they’ve found some ways to push the bulging envelope of violence even further, while providing music that’s more of a thrill ride than a turgid hurricane of distortion. As proof, we bring you the premiere of “Traitor Bomb Threat“.

“‘Traitor Bomb Threat,’ according to vocalist Lörd Matzigkeitus, “is about the murder of 556 people during a religious event that took place last year”. “This is our unholy retaliation,” he says, adding that “The Black Sorcery stands in the path of any human that would kill what is in the name of what is not.”

Any sane person would have to think twice about standing in the path of this band — and the vocals are a good place to start the explanation. They are over-the-top, off-the-charts, beyond the grasp of sanity. They are the work of a single person, but they sound like a cacophony of beasts and demons, a maniacal maelstrom of stunningly tortured shrieks, utterly bestial gutturals, chillingly lunatic cries, and a few petrifying wails. To repeat, this isn’t a monotonous, one-note performance, but a shape-shifting cavalcade of raw fury.

The intensity doesn’t stop there. Behind those shocking, ear-manglnng sounds there’s a phalanx of nasty, roiling guitar abrasion and battering, galloping percussion, with a through-line of cruel, cold melody, and a dose of chaotically twisted leads. No, it’s not for the faint of heart, but it is the kind of performance that gets the heart racing.

This is The Black Sorcery’s debut, but the members have other bands on their resumes, including The Projectionist, Path to Extinction, Albanach ar Dheis, Diabolus Amator, and Thy Sepulchral Moon. Krucyator Productions will release the album on tape and digitally, and Hammer of Damnation will release the CD edition. Pre-order links are below, along with a previous single from the album.

The vivid cover art was created by Sang Ho Moon, and the band’s logo by Daniel Hermosilla.