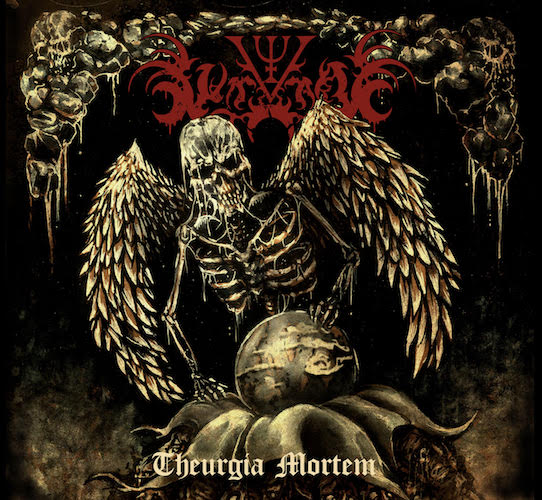 The French label Atavism Records is devoted to black metal, and its owner has a proven discerning taste for sinister music. Among the label’s releases, we have devoted attention to recordings by Cult of Extinction, Invehertex, St. Barthelemy’s Temple, Funeral Desekrator, and Lvx Hæresis.

While it might be unfair to generalize about the label’s tastes, given the diversity of the music created by the bands listed above, there is annihilating savagery to be found among those releases, as well as unearthly atmosphere, of the kind that reflects an occult spirituality.

One of Atavism’s more recent discoveries is the obscure French project Vurvarat. It is one of those black metal bands that does not disclose the identity of its member (or members), provides no photographs, does not indulge in live performances, and has no social media presence. As the expression of their creative impulses and objectives, the music alone will have to be enough.

The debut album of Vurvarat is Theurgia Mortem. One song from the album surfaced in January, a track named “Magnificent In Decay”, which was indeed magnificent and decayed. A slow, haunting, and mesmerizing piece with an unsettling mystical atmosphere, it also flashed with bursts of delirium. As I wrote after hearing it, it raised goosebumps on my arms, got my head nodding, and made me think of nightmares, and the exhalations of lost souls in an endless void.

I was thus eager to help spread the word about a second song from the album, the one we’re premiering today, the name of which is “Wake of the Foul Mind“.

It is a pitch-black spell this song weaves, one that insidiously infiltrates the mind, drawing it ever deeper into a blood-freezing netherworld. For most of its length the song is solemn and stately in its pacing, and there is even a kind of fierce reverence in the bestial howls and wretched cries manifested by the vocalist, while the melodies are utterly stricken, becoming penetrating manifestations of desolation. Other sounds in the music create visions of phantasms rising in the gloom, and a feeling of creeping dread and madness.

Halfway through, the drumming and the riffing grow increasingly animated… but those fires burn out, giving way to a chilling ambient sequence accented by the melancholy trill of the guitar. When Vurvarat return to the song’s opening spell, you realize how quickly it had infected the mind in its first appearance. It seems like the return of a familiar visitor, albeit an inhuman one, perhaps the visitation of Death.

The artwork for Theurgia Mortem was created by JDW Death is my only Friend. It was mastered by H from Ibex Sound.

Atavism has not yet set a release date for the album. Further information about the release will be forthcoming, via the places linked below.

Track List:
01. I The Ghastly Demise
02. II Transfigured and Reborn in Fire
03. III Wake of the Foul Mind
04. IV Magnificent in Decay
05. V Incantations for the Deformed
06. VI Within
07. VII A Pale Horse Descends

One Response to “AN NCS PREMIERE: VURVARAT — “WAKE OF THE FOUL MIND””