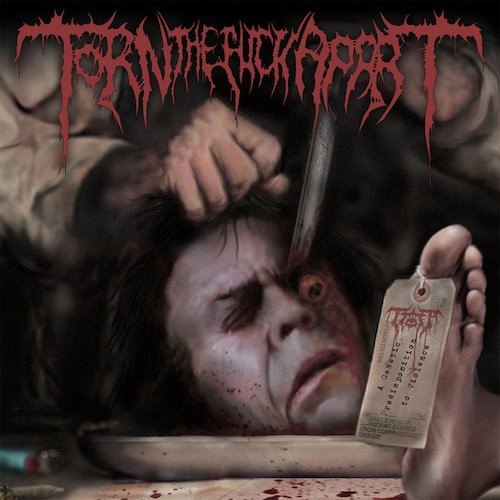 With a name like Torn the Fuck Apart, this Kansas City death metal band might not be one whom you would expect to practice subtlety in their musical creations. And indeed, there is a fundamentally eviscerating quality to what they’ve done on their newest album, A Genetic Predisposition to Violence. But the music isn’t sheer brute-force blood-letting either, as you’ll discover when you listen to the track we’re presenting today, the name of which is “Invitation Homicide“.

With three well-received albums behind them already, the band have had the time to hone their methods of violence and to enrich the slaughtering impact of their rampages in new ways. 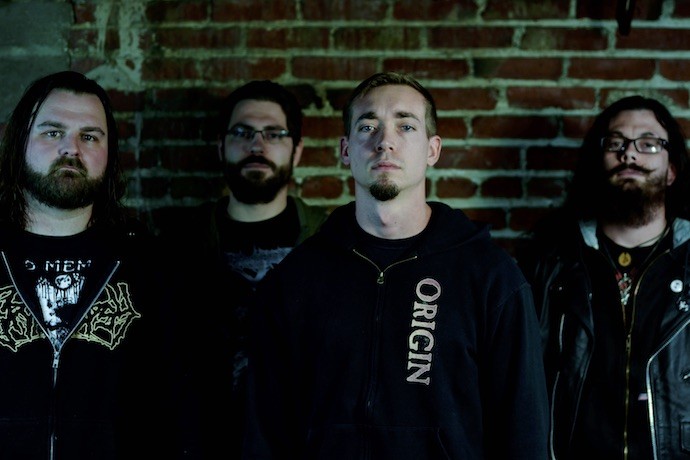 As guitarist/vocalist Michael Langner has commented:

“A Genetic Predisposition to Violence is the nexus of a long process of refinement and evolution of sound we had long sought after. Taking a wide array of influences from both modern and old, we’ve cultivated a sound that feels original, yet tips a hat to the viscerality of the inception of underground metal. Furthermore, we took great care to ensure that the recording process itself reflected that – everything was recorded in a studio in real time, and guitars were all mic’d through a cab with the same gear and settings we use on stage.”

As abundantly displayed on “Invitation Homicide“, Torn the Fuck Apart deliver brutal death metal assaults with impressive technicality and with lacings of insidious melody that help stick the songs in listeners’ heads like spikes.

Of this particular song, we again have some words from Michael Langner:

“‘Invitation Homicide‘ represents the intensity of our upcoming album. It delivers a relentless onslaught of riffs and a classic slasher home invasion story for any horror movie fanatic. The lyrics for this song were actually written by the horror movie actor/director Jeff Sisson who also did the artwork for this upcoming album. This song has become one of our personal favorites and we hope you enjoy it.”

And speaking of Jeff Sisson (who has also done visual work for the likes of Dying Fetus, Exhumed, and Origin), his own comments about the artwork are worth noting: “With a name like TORN THE FUCK APART, the idea of doing something subtle is not an option. Severed head. Dismembered limb. Weed. Typical death-metal album art.”

A Genetic Predisposition to Violence was recorded and mixed by Adam Mitchell and Ty Scott at Hammerfarm Studios (Troglodyte) in Lawrence, Kansas, and mastered by Robert Rebeck (Origin, Tech N9ne, Unmerciful).

It’s set for release on June 29th by Gore House Productions (CD and Digital). Below you’ll find a pre-order link, the track list, and a schedule of upcoming live dates for the band… and of course our stream of “Invitation Homicide“.

Track List:
1. It Jammed the Woodchipper
2. Invitation Homicide
3. These Pliers Are Terrible for Pulling Teeth
4. In the Confines of Fear
5. Dad’s Head for Dinner
6. Abhorrent Existence
7. Boiled, Chopped and Slopped
8. Collection Complete
9. The Object of Obsession
10. Compulsion to Torture