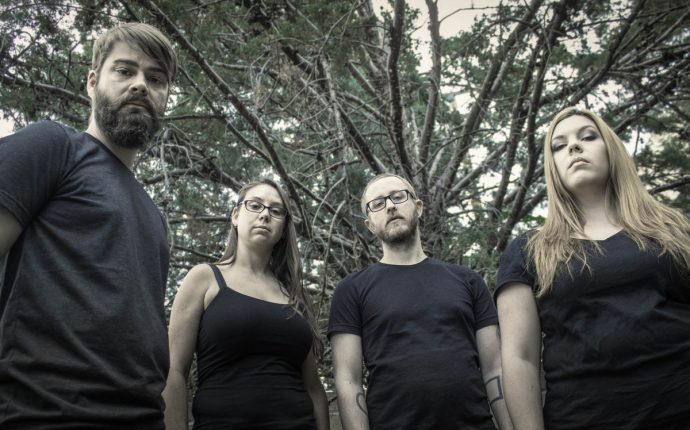 (Andy Synn delivers a SYNN REPORT for the month of April, reviewing the lion’s share of the discography of the New Mexico band Distances.)

Recommended for fans of: Agrimonia, Cult of Luna, The Ocean

Melding Sludge and Post-Metal with touches of Prog and Crust, Distances are one of those bands who you can’t help but think would be much bigger, and much more beloved by the Metal community, if only they were given the attention and exposure they so richly deserve.

Cerebral yet cathartic, heavy in both brooding atmosphere and sheer sonic weight, the Albuquerque quartet make music designed to hit both the head and the heart, and practically guaranteed to leave a lasting impression.

So, without further ado, here’s a run-down of all three of the band’s albums – including their recently released third record, Diableries, but not their 2016 covers album Rip Offs – plus their fantastic 2015 EP Forage & Reproduce. I hope you like what you read/hear. 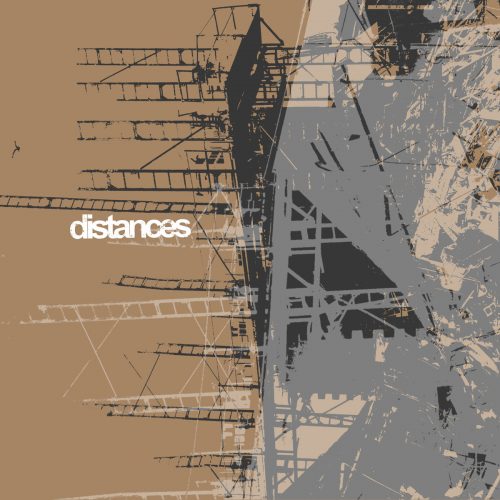 The band’s debut begins with the abrasive “Armillary Shift I (We Are Wind…)”, four-and-a-half minutes of wild, scrambling drums, howling vocals, and melancholy melody all wrapped up in a neat little package, followed in swift succession by the eccentric melding of intricate, proggy beauty and bruising intensity that is “Centrifuge”.

At nearly eight minutes in length, “Collapse” is the first of the album’s more extravagant numbers, spitting forth a visceral stream of raging riffs, hammering percussion, and angst-ridden vocalisations, whose volatility is matched in turn by the song’s unexpectedly calm and contemplative undercurrent.

“The Polaris Breach” is a potent piece of prime Post-Metal power (try saying that three times fast) which displays a great grasp of dynamic ebb and flow, and benefits from a striking mix of raw energy and refined melody, while “Alidade” showcases just how effective the classic slow-burn approach can be in the right hands, building up the tension until it explodes in a fiery conflagration of sound and fury.

The stripped-down, bare-bones rager that is “Armillary Shift II (…We Are Debris)” shows off the band’s more chaotic side (as well as some truly brutal and belligerent vocals), whereas “The Depleted Self” is almost the direct antithesis of this, demonstrating a much greater sense of patience and control, while also holding back the vocals until near the very end to guarantee maximum impact when they finally burst free.

“Feral Shores” takes those Agrimonia/Cult of Luna/The Ocean comparisons made up above and doubles down on them hard, while also throwing in a healthy dose of churning dissonance and pummelling drum work that gives the track an almost Death Metal style feel in places, such that the song’s nine intense-yet-introspective minutes seem to absolutely fly by in a flurry of raucous riffs, bellowing vocals, and hauntingly atmospheric interludes.

The album closes with the gargantuan pairing of “30,000” and “Solipsism”, which together clock in at almost seventeen minutes in length. The former is the heavier of the two, focussing initially on sombre ambience, before erupting into a churning metallic maelstrom interspersed here and there with moments of moody meditation, and serves to clear the way for the latter’s heart-wrenching, soul-stirring blend of metallic fury and hypnotic melody to bring things to a close. 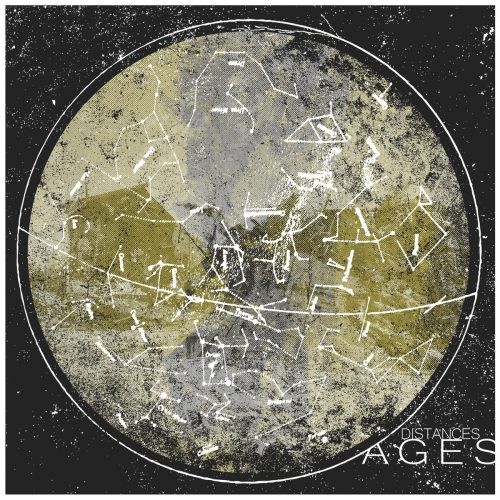 Kicking off with the ominous introductory strains of “Senescence: Dysplasia”, the quartet’s follow-up to their mammoth debut is a shorter, sharper, more refined and more atmospheric release than its predecessor, an impression only reinforced by the doomy, desolate tone taken on “Threadbare”, whose use of light and shade and negative space to enhance its sense of punishing heaviness and oppressive atmosphere is absolutely second to none.

“Parker” is a similarly massive tune, and one which really showcases the band’s humongous guitar tone in all its gargantuan glory, along with some perfectly placed juxtaposition of minimalist melody against bombastic heaviness, after which the creeping quiet of “Senescence: Metastasis” provides a welcome breather leading into the sublime “Sans Wander”, whose bestial beauty and brutal sincerity reminds me strongly of Cult of Luna circa-Somewhere Along the Highway (which is high praise indeed).

And although “Threshold” demonstrates a much more restrained side to the band, any fears that they might be going soft should be quickly dispelled by the teeth-grinding aggression and relentless percussive pounding of “Keelhaul”, which evinces a level of energy and extremity not seen before on either this album or its predecessor, and which remains one of the heaviest and hardest-hitting tracks the group have ever recorded.

Closing with the torrid gloom and turbulent grooves of “Senescence: Apoptosis”, whose appearance here serves to tie up the album’s overarching concept in stunningly effective (not to mention stunningly heavy) style, Ages is the sort of release which demands immediate replay… but which probably also requires that you take a few minutes to rest up and regain your strength first! 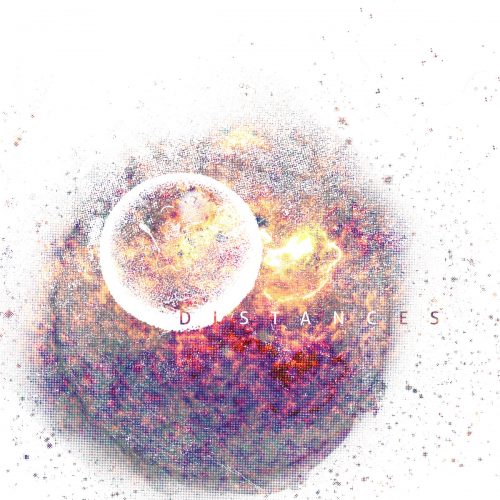 The band’s 2015 EP saw departure of guitarist Justin Bradshaw and the addition of violinist Kristen Radoslovichto to the band’s line-up, along with a shift towards a moodier and more progressive approach – albeit one which doesn’t seem to have sacrificed even an ounce of heaviness or intensity in the process.

The first signs of this are immediately apparent on “Forage”, whose haunting, string-infused ambience – backed in the track’s second half by a simple, yet deviously effective back-beat from drummer Peter Hague – has a truly mesmerising effect, and sets the stage for the intricately interwoven layers of melody and distortion, atmosphere and aggression, which make up the riveting and riff-intensive  “Reproduce”.

The chunky, chugging guitars which form the foundation of “Repeat” are easily amongst the most dense and dissonant the band have ever deployed (something which is all the more surprising when you consider that this release sees them down a guitarist), and the song’s outstanding atmospheric intensity helps make it a fitting centre-piece for the EP, with a sense of presence and focus which never lets up throughout its seven-and-a-bit run-time.

The similarly lengthy strains of “Death” flip the script to place the emphasis on the softer and more somber side of the band’s repertoire… at least at first… with Radoslovich’s weeping violin taking centre-stage for the majority of the track, only for it to conclude with a sudden paroxysm of distortion and catharsis right at the very end.

And speaking of catharsis… the anguished howls of vocalist/guitarist Karl Deuble seem to have taken on an extra edge of venom and frustrated fury on this EP, and nowhere is this more palpable than during “Return”, where his booming bellow seizes the limelight amongst an unrelenting array of mammoth riffs and lurching rhythms. 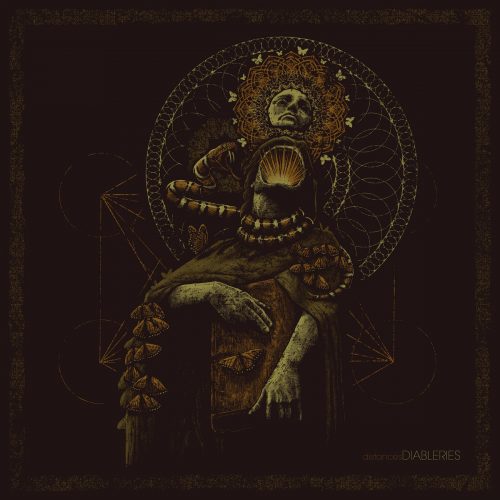 For their third album the Distances crew decided to go bigger, and darker, than ever before. And though there’s perhaps an argument that Diableries is a little too long for its own good (an accusation which could also be levelled at their debut), when your senses are being battered by songs like “God Rest” and “Judas Steer” – the album’s striking opening combo – it’s very easy to lose track of time altogether.

The former, for example, is seven minutes of spine-tingling melody and neck-wrecking savagery, mixing soaring Post-Rock vibes with blistering crust-punk vitality, aided and abetted by some gorgeous and atmospheric violin work, which seems to zip by in hardly any time at all, while the latter has a similarly crusty, but far more deathly, aura to it, and finds the band punching well above their already impressive weight, with the momentary calm of the song’s mid-point causing its final minutes to hit even harder than before.

“Glass House” is a more nuanced and multilayered affair than its predecessor, showcasing some gripping interplay between bass and drums, violin and guitar, hooks and heaviness, and winds up being one of the most evocative and electric tracks in the band’s entire repertoire. It really is a monumental song, moving smoothly back and forth between different movements and moments, peaks and valleys, highs and lows, which never once threatens to outstay its welcome.

Cleverly, the band chose not to try and compete directly with “Glass House” for its immediate follow-up, instead opting to go for the stripped-down melodic minimalism of “Maybe”, which clears the air before the hypnotic hybrid sound of “Market Price” – loaded with captivating hooks, crushing riffs, and caustic, clamouring vocals – steps up to grab the listener’s attention in scintillating style.

With “Perfect Is The Enemy”, Distances continue to explore the proggier, more textured end of the spectrum, at least during the song’s gloomy-yet-gorgeous opening minutes, building slowly but surely towards another brilliantly realized crescendo of cascading metallic fury and pure cathartic emotion, which once again demonstrates just how fantastic this band can be when all the pieces are perfectly aligned.

And while “Hollow Ground” doesn’t quite rise to the same ecstatic heights, its more visceral and violent delivery certainly makes a statement, even if it is quickly overshadowed by the extravagant excesses of “Throat of Mankind”, and the similarly epic, but even more effective, “Crooked Spine”.

As a matter of fact, “Crooked Spine” is potentially the album’s true pinnacle, delivering a plethora of titanic riffs, grim grooves, and pulse-quickening percussion – all interwoven with Radoslovich’s spectral strings and topped off with Deuble’s colossal roar – over the course of 10:46 of proggy, sludge-soaked Post-Metal prowess, after which the soulful strains of “Selfishness of Loss” serve as the inevitable come-down, the calm which follows the storm, that allows the listener to finally catch their breath and collect their thoughts at last.

I said at the very beginning of this column that Distances deserve to be more widely-known and appreciated than they are, and Diableries has only served to cement that opinion even further. So try not to miss out if you know what’s good for you!