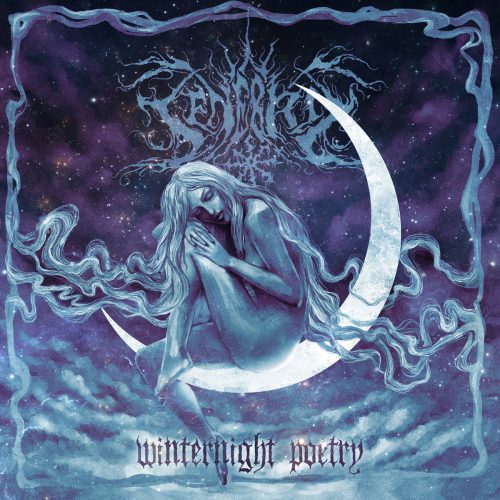 In a recording career that now spans more than a decade, the Russian band In Tenebriz has released nine albums and an even greater number of EPs and splits. Beginning with the Autumn Constellation album in 2015, In Tenebriz has pursued themes that use that the natural phenomena of the seasons as a way of reflecting the inner experiences of the lyrical protagonists, while drawing upon the elements of atmospheric black metal, doom, ambient music, and post-metal to give musical shape to these external changes and internal moods.

The newest album in this sequence is Winternight Poetry, and on this album the principal creator of In Tenebriz, Wolfir, has done everything, including the vocals. Conceptually the album is an interpretation of Hans Christian Andersen’s seven-part tale The Snow Queen, but with a dark twist: in the tale of Winternight Poetry, the protagonist Kai fails to spell the word on the frozen lake that will free him from the Snow Queen’s enchantment, and must therefore remain a prisoner in the kingdom of permafrost forever.

Like the story, the new album of In Tenebriz is divided into seven parts, totaling more than 38 minutes of music. The third of those parts is what we present today.

The music of “Winternight Poetry III” itself has a narrative quality, a changing movement that seems to accord with a changing experience. And it presents contrasts in sound that draw the listener in, and bring about alterations of mood that can be sensed without regard to any knowledge about the lyrical tale that’s being told.

The stage is set by a high, pinging keyboard melody over a lower ambient hum, and that motif reappears later in a familiar way, but not before In Tenebriz turns the music in a much darker and heavier direction with a slow, gloom-cloaked riff, a determined percussive pounding, and vampyric snarls mixed with wretched howls. When that light keyboard refrain returns, it comes with a soft syncopated beat and the layered strings of acoustic guitar crafting a brighter melody, as if capturing a remembrance of happier times. And when the power of the music swells again, it has a soaring, heart-lifting quality, though still edged with wistfulness.

But of course the mood falls again, and when a darting riff takes up residence, this part of the opus ends on a feeling of desperation.

Winternight Poetry will be released by Satanath Records‘ sub-label Symbol Of Domination (Belarus) and More Hate Productions (Russia) on May 25th. It’s recommended by the labels for fans of Atmospheric Dark metal, as well as fans of early Katatonia, Paradise Lost, Draconian, and Cemetary.