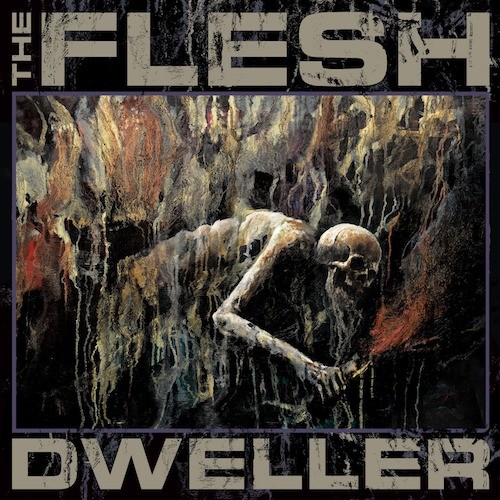 The Flesh don’t try to gild the lily in what they’re created through their debut EP, Dweller — or more accurately, gild the thorns and the meat cleavers.  From the putrescent, rotting abomination crafted by Mattias Frisk for the cover to the band’s proclamation that the songs were created “in praise of spiritual, physical and emotional erosion”, they put their motivations right up-front, without pretension: this is black-hearted, fury-pitched, bone-breaking music.

The members of this Dutch group come from the ranks of such other notable bands as Herder, Verwoed, and Blood Diamond. They allegedly joined forces after a night of heavy drinking; they drew the lyrics from themes that dwell on “the destructive drives of lust, disgust and (self)annihiliation”; they tracked these seven songs live; and they pulled no punches. 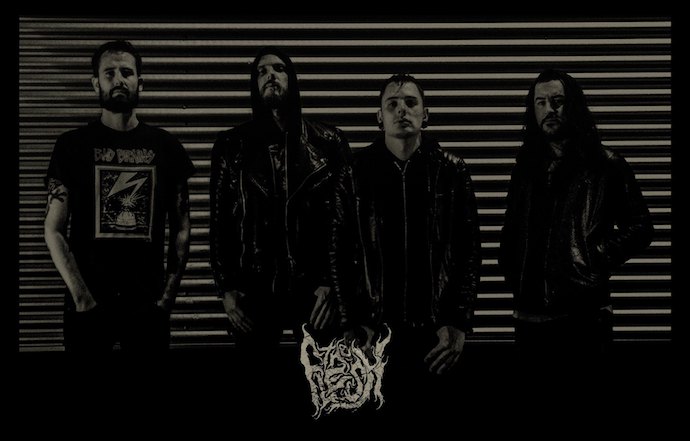 The song delivers punishing physicality, and a mood of disintegration and rage. Thanks to skull-busting drumwork, a bass line heavy enough to vibrate your bone marrow, and huge, hammering riffs, it’s a massive marauder, made all the more ferocious by the vocalist’s cauterizing shrieks and heartless roars. All of that gets the adrenaline going, but there’s a seductive melodic core in the music, too, interwoven with episodes of scathing desolation.

My only complaint is that I wish it had gone on for a couple more minutes. Fortunately, there’s more where this came from (below, we’ve included a stream of a previously released track called “Salax“, just to prove that point).

About “Siren’s Call”, we have this comment from the band:

Lust and decay are two of the driving forces behind The Flesh, in both a musical and lyrical way. In this track a dance between the two. Darker, dissonant melodies flow into more ferocious punk riffing and drumming. Projecting the enchanting grip of a woman (or lover in general) that can be both a reason to move forward and a very destructive mechanism. Something that is inescapable for most of us. So we unwillingly submit, because it is carved in our genetic code. A bitter sweet thing to be trapped in a lashing love, more enslaving than society itself. These situations further define who we are and can manifest themselves as a hate wrapped in velvet.

At the moment, Dweller is projected for release on June 1st, though if a label steps forward, that might change. We’re told that The Flesh are already at work on an album, which is good news based on this EP. The members of the band are: Sven Post ( guitars); Jelle Kunst (vocals); Jeroen Vrielink (bass/backing vocals); and Tom Nickolson (drums).