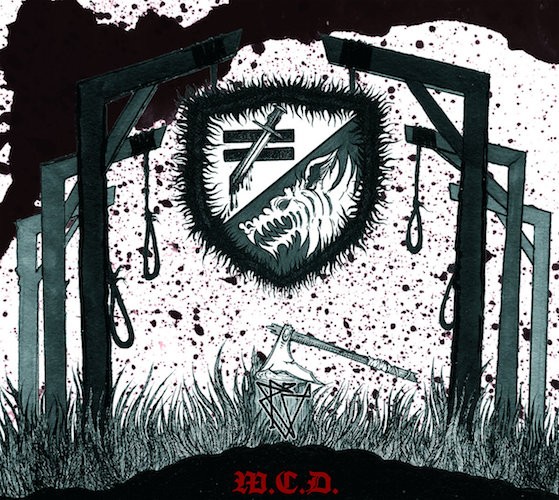 In April when I came across the first two tracks released from Wolfcult Domination, the debut EP by Salt Lake City’s Goat Disciple, I wrote: “You will read that the band’s music is war metal, and it is indeed a rapacious hybrid of black and death metal worthy of a name like Goat Disciple — but it’s so much more multifaceted, and executed with so much more technical acumen and creative exuberance, than most offerings in that bloody field that the ‘war metal’ label seems inadequate. At a minimum, if these two songs are a reliable indicator of the EP as a whole, it should vault them into the upper echelons of the field. And I don’t say that lightly.”

It turns out that those first two songs — “Oreb Zaraq” and “Mammon” — were rock-solid indicators indeed. The EP as a whole is a stunningly strong debut, all four tracks abundantly proving that Goat Disciple’s talents go beyond a capacity to engage in breathtaking musical slaughter (though they’re certainly very good at that, too). And thus we’re very happy to present a full stream of the EP in advance of its June 15 release by Blood Harvest Records and Helter Skelter Productions. 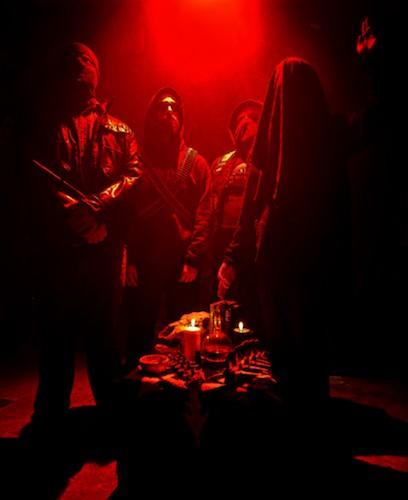 As I wrote before about the first two songs, in broad strokes Goat Disciple deploy breathtaking frenzies of flesh-shredding riffage, jet-fueled drum fusillades, and a grotesque array of cavernous growls, tyrannical roars, and shrieks of murderous lunacy. The music strikes with delirious viciousness and overpowering explosiveness.

The sonic force and electrifying effect of these attacks shouldn’t be underestimated. The drumming really is off-the-hook much of the time, with frequently changing percussive patterns executed at high-speed and with impressive dexterity, and the bass-work (which is given a co-equal place in the mix) is equally vibrant and nimble. The songs are also packed with changing riffs (often discharged with maniacal energy and full-throttle speed) which warp, writhe, lash, and jolt as if fueled by napalm. When the band have the pedal jammed to the floor, the music burns white hot, and its viciousness is enhanced by horrifically bestial growls and lunatic howling.

But as also previously noted about the first two tracks, the EP also reflects substantial song-writing prowess. All those riffs are far more than the typhoons of chaos that often pass for riffs in a lot of war metal. The riffs in these songs are unusually hook-y, so much so that they get stuck firmly in the head. You’ll hear that immediately in the principle, pulsating motif of the opener, “Oreb Zaraq”, and you’ll hear it again and again before you reach the end of the record.

Moreover, the band’s variations in rhythm and pacing further prove their song-writing talents, the ferocious drum attack segmented by skull-busting clobbering and martial snare work (among other things), the music dropping into cold, vicious, grinding cascades that evoke looming shadows of doom or ominous shades of rising infernal imperiousness. The soloing, which ranges from a freakishly eerie one in “Oreb Zaraq” to a fluid, melodically exotic one in “Mammon“, are also integral elements of what makes the songs so good, rather than sounding tacked-on, like afterthoughts.

In short, this is the kind of musical extremity that’s not only ruthlessly barbaric but also well-structured, and “catchy” on the very first listen. And it’s guaranteed to get your blood racing and your lungs pumping for more air.

In describing Wolfcult Domination, Blood Harvest and Helter Skelter make reference to such bands as Diocletian, Angelcorpse, and classic Katharsis. They will release Wolfcult Domination in CD and tape editions on June 15th, with a vinyl edition to follow on July 14th. For more info, check the links below.

2 Responses to “AN NCS EP PREMIERE (AND A REVIEW): GOAT DISCIPLE — “WOLFCULT DOMINATION””