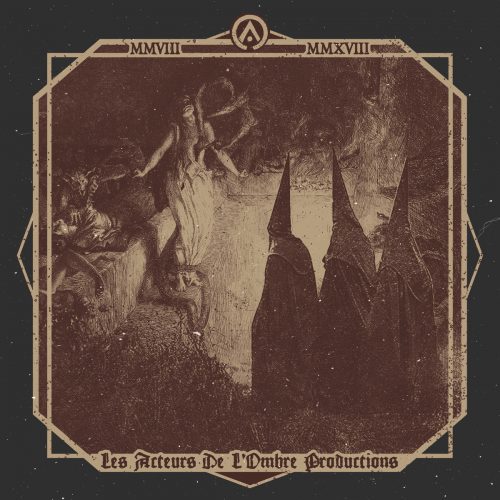 Label samplers and other compilations are great ideas, especially compilations like the two recent offerings that I’m writing about in this post, which are available through Bandcamp for a price you pick for yourself. Between the two of them, they deliver 33 songs.

Apart from the obvious attraction of substantial playlists of music that you can pick up for free, or whatever your resources will allow you to contribute, samplers such as these provide an introduction to bands you might never have heard before (in addition to bands who’ve already made names for themselves that most of you will know of). I’m very glad I spotted alerts about them within the vast sea of dreck that is the NCS in-box.

I haven’t tried to manually count how many releases I’ve written about and recommended over the years from the French label Les Acteurs de L’Ombre Productions, but a word-search of our database turns up 17 of them. That number probably should have been larger, but there are only so many hours in the day. Suffice it to say that LADLO has good taste, which is to say that what tastes good to them almost always tastes good to me. The label is run by volunteers, they tend to focus on black metal, and they tend to focus on French bands, but not exclusively so.

LADLO’s new release, SAMPLER MMXVIII, includes tracks by 11 bands. Of that group, I know of and we’ve written about eight of them — Maieutiste, Moonreich, Au-Dessus, Aorlhac, Spectrale, Monolithe, Hyrgal, and Penses Nocturnes. Which means that I have three new discoveries to make in this compilation — Penitence Onirique, Verfallen, and Darkenhöld — and maybe you will have more discoveries ahead of you within this release.

But I should add that I haven’t heard all of the songs on this comp even from the bands whose music I’ve encountered before. The tracks by Maïeutiste and Pénitence Onirique, for example, are new, and both are wonderful. The former is an instrumentally exuberant, vocally varied, rhythmically dynamic, constantly surprising fireball of sound, both head-twisting and soulful — and damned difficult to pin down in genre terms.

The latter is more subdued, more depressive, more sorcerous and surreal in its dark, disturbing, spellbinding effect, but no less engrossing. And halfway through, that Pénitence Onirique song takes off, so brace yourselves for the rush (and brace yourselves for alternating vocals of monstrous depth and incinerating agony as well).

P.S. The tracks from those other two bands I hadn’t encountered before, Verfallen and Darkenhöld, are also great new discoveries, and the rest of this compilation consists of choice cuts by other excellent bands. The whole thing is a gem. It’s available on CD as well as digitally. 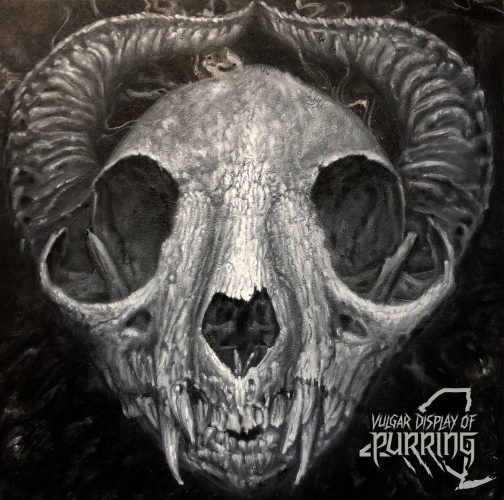 “And Justice For Paws… is a new non-profit initiative founded by Brutal Panda Records co-owner Bob Lugowe meant to raise money and awareness for domestic and wild animals across the globe, all in the spirit of Heavy Metal”. And that’s what the press release we received describes about the this organization’s mission. Its first initiative, cleverly entitled Vulgar Display of Purring, is described as “an ambitious project designed to showcase the best cat-loving heavy bands and artists in all 50 states and raise money for a local organization that helps improve the lives of cats in each region”.

The first state in the series is New York, and the NY compilation (which includes an original painting from NYC tattoo artist Jon Clue on the cover) collects tracks from 22 bands, including stylistically diverse recent music from the likes of Woe, Tombs, Imperial Triumphant, Car Bomb, Mutilation Rites, Unearthly Trance, Anicon, Artificial Brain, Dead Empires, Pyrolatrous, and Belus, all of whom we’ve written about in positive terms here at NCS. And the compilation therefore includes tracks from 11 bands we haven’t previously paid attention to, at least in what we’ve written.

According to And Justice For Paws…, “All proceeds from the compilation and merch will benefit City Critters, a NYC based organization that places stray and abandoned cats with homes and works with members of the community to find humane solutions to problems involving homeless animals”. What’s more, this project intends to release 49 more compilations, one for each of the remaining States. That’s a heavy undertaking, but I sure as hell hope they can follow through, because this first release is a huge bonanza.

P.S. In the interest of full disclosure, I am a cat person (though I can tolerate dogs). However, this has (almost) nothing to do with why I’m recommending this comp to you. I mean, just listen to the music — it’s outstanding.

P.P.S. This compilation is a bit different from the first one in this post, because it’s intended to raise money for a charitable cause rather than exposing more people to a label’s roster. And because raising money is the objective, think seriously about kicking in some dollars if you can manage it when you download this monster.