So far, the German band Imperceptum has released two EPs and three albums. I’ve reviewed all of them excerpt the first EP. At the risk of oversimplifying the experience of these releases, its creator (who calls himself Void) combines elements of atmospheric black metal, funeral doom, ambient music, and post-metal to create long, void-faring journeys that are both terrifying and beautiful.

To borrow from what I’ve written elsewhere, the richly textured music moves from immense hurricanes of cataclysmic fury to slower, earth-shattering, and crushingly bleak expositions of doom, to illuminating drifts through astral planes or across the yawning maw of deep space. Sweeping and soaring movements of vast and alien grandeur are juxtaposed against harrowing, blood-freezing storms of shock and awe. All of the releases are immersive; the songs are long, but for this listener the minutes seem to pass without any consciousness that time is passing.

And so I’m very happy to report that Imperceptum will be releasing a new album at the end of June or early July. Entitled Heart of Darkness, it will consist of four tracks and about an hour of music, and today we present the second of those tracks, “Lightdevourer“. 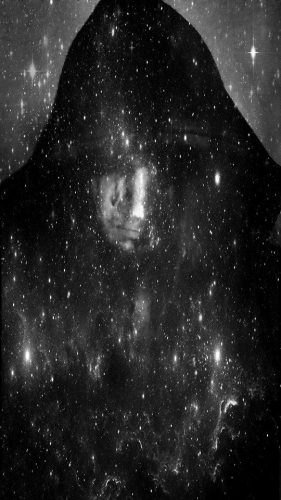 Once again, this is a lengthy piece — 15 1/2 minutes long. Once again, it seems to compress time, or render the passing of the minutes unnoticeable as it sweeps the listener through the whirl of its changing vortex. It builds gradually, rises in power, subsides, and surges again to a riveting crescendo, its mood changing as it goes (changing shades of darkness) but never relinquishing its grip on the imagination.

Imperceptum layers the sound gradually, slowly adding chords and notes that are somber and ghostly, hypnotic and mystical, to the widely spaced reverberating bass tones that begin the journey. Without warning, the high shimmering sound becomes searing, the tension building, the percussive tones now sounding like bombs going off, the vocals bringing into play vicious, flesh-clawing snarls and horrid roars.

The riffing becomes frenetic while the high tones continue to peal and reverberate; the music has become dense, dramatic, and foreboding, and when wild, cauterizing shrieks come in, you find yourself in a titanic storm of skin-shivering sound — majestic, frightening, and sorcerous.

The storm breaks about halfway through, the music becoming a textured shimmer of layered ambient sound; we’ve entered an astral plane, or a spectral realm. Those widely spaced bass booms return, as do the moody, crystalline guitars, but this time the mood is more fully one that channels feelings of isolation, grief, and perhaps the ache of remembrance, and the music has also become beautiful.

Another sudden surge of power breaks the spell. Driven by a faster, pumping rhythm, the music swells in volume and power, the intensity magnified by a long shattering shriek of pain, and the symphonic melody becomes sweeping and panoramic, sorrowful but again with an aura of majesty. Cracked snarls, almost like gasps, seem to signal the build toward that riveting crescendo as the drums rumble like rapidly rolling thunder.

At the end, as the drums slow again; the intensity of the music is undiminished, but an air of anguish and desolation descends, while gleaming shards of mystical sound spear through the devastation. Perhaps the last of the light as it’s being devoured? Or a sign that it refuses to be extinguished?

I haven’t heard the rest of the album yet, and so can’t say how this piece fits into the overarching framework, or what sensations the other pieces will bring. But I’m anxious to find out. Initially, Heart of Darkness will be a digital release through Bandcamp. For further news about the release date and how to get it, watch these spaces: