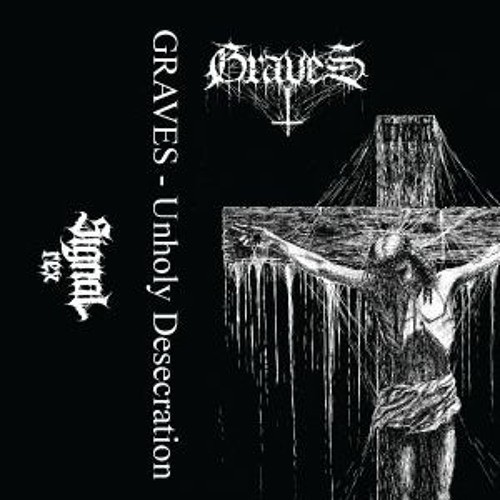 From the catacombs of the Portuguese black metal underground Signal Rex has unearthed Graves, presenting their blasphemous debut demo, Unholy Desecration, on cassette tape as a prelude to the band’s debut album coming later this year — and we’re presenting a full stream of the demo today.

As the label says, Unholy Desecration triggers memories of the French Légions Noires, of the Portuguese Black Circle, and of raw Finnish black metal from the past couple of decades. But while devoted to certain recognizable traditions, Graves‘ devotion isn’t slavish. Their own talent shines through with mortifying vibrancy.

At a high level, their sound is primitive, stripped-down, and fundamentally guitar-driven, and given a strong dose of infernal madness through livid, reverberating vocals that manifest fury, disgust, and splintering pain. The tracks are unmistakably grim and murderously cold, yet at the same time they summon sensations of barbaric chaos, and are bursting with compulsive, head-pumping energy.

Not to take away from the terrors of the vocals or the head-plundering power of the rhythm section, but the riffs on these tracks occupy the starring role. The distorted guitar tone gives the music a rough and raw abrasiveness, and the sound delivers both heaviness and the feeling of being injected with a lethal toxin. The first exposure comes in the relatively short intro track (“His blood shed on the cross“), whose simmering, ear-gouging dissonance and stately, ritualized drum beat lead to rolling drum thunder and slashing, flensing chords.

And from there the tempo goes up on “Funeral Pyre“, and the music goes up in flames. Wretched howls and pummeling blast-beats mix with a riveting, ferociously lashing and swarming guitar attack, spiked with fiery leads and a voice rising in petrifyingly furious shrieks. The track is grim and menacingly cold, but also savagely feral.

“Black throne of satan” surges in a similar fury, the drums blasting and the vocals discharging an array of ghastly roars, wild wailing yells, and grotesque cackling and gagging sounds. But the pace eventually slows, the chords ringing out a lurching death toll of abject misery and disgust.

Having slowed the onslaught, Graves stay in that vein with the follow-on track, “As unworthy slaves of Satan’s words“, which unfolds as a slow stomp built around an the über-grim riff that’s a morbid and soul-crushing head-mover. Yet the music heats to a boil again in the closing title track, and then boils over in a torrent of snare-blasting and savage, reptilian riffing, flaring with streamers of phosphorescent soloing. The sound is ecstatic and bestial, uncorking a barrel of adrenaline and putting the fearsomeness of Lucifer into the bloodstream as well.

2 Responses to “AN NCS DEMO PREMIERE (AND A REVIEW): GRAVES — “UNHOLY DESECRATION””