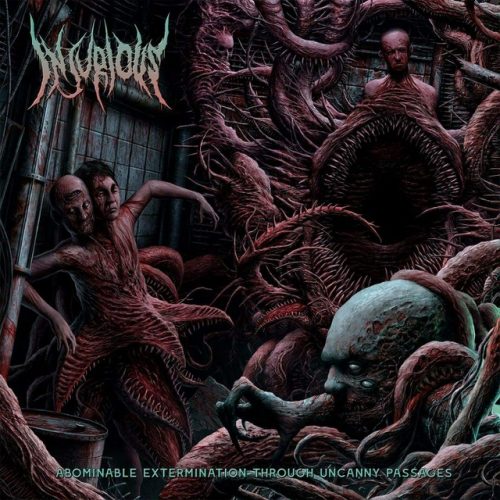 (Our Caribbean-born but recently U.S.-based friend Vonlughlio rejoins us with a review, born of unusual enthusiasm, of the new album by the Pennsylvania band Injurious, whose new album was released on July 1st by Lord of the Sick Recordings.)

It has been a while since I had the opportunity to do a small write-up for NCS. This time around I would like to introduce you to the band Injurious from Pennsylvania, USA. This is the solo project of Mr. Joe Anthropophagi (Abolishing the Ignominious, Disgruntled Anthropophagy, Manipulated Calamity, Ex-Animals Killing People). The first release was back in 2017 with the promo that consisted of two songs: “Execrable Hierarchy Diminishing the Worthless” and “Immersed into Cycles of Enmity”. That promo was highly praised in the BDM community and showcased Joe’s already high level of musicianship. The man is just pure talent.

Just last week the EP,Abominable Extermination through Uncanny Passages was released via Lord of the Sick Recordings, and that’s all I have been listening to. This is one EP that’s just full of hatred, from the blast-beats and twisted riffs to with vocals, which successfully transmit this felling to the listener. For me, it’s the best BDM EP of 2018.

Once you press play and that intro sets in with the guitar on the background as distortion and you hear the voices, it’s a perfect introduction to the apocalyptic infested parasite that eradicated humanity. This is pretty much the theme for this EP (from my perspective).

To see in your mind the atrocities that such an entity would unleash upon us makes you think of the things we human beings are capable of doing to each other. This is hateful and unapologetic, sound; musically, it is precise, with changing tempos and structures, riffs that carry a tune, with a production that’s a perfect match.

One of the best thing about the EP is the drumming. Like the other projects from Joe, it maintains that signature sound he is known for but adds new elements for this release. He made sure that the drums and guitar feed off of each other in each of the songs, giving a sense of continuity for this story.

One key element that brings this together is the fact that he is the one in charge of everything; this is his vision and execution, without anyone else contributing to it. When it comes to criticism, Joe is his worst critic and he took as much time as was needed to write the EP. In my opinion, it worked — in the visualization, the conceptualization, and the music — for this to be in line with his theme.

As stated earlier, for me, this EP is basically my favorite in the genre, and it solidifies Joe as one of the best BDM musicians out there. The man can do no wrong in BDM, and I hope he continues to make music for Injurious and his other projects.

Give this a chance, listen, and if you like what you hear, support Injurious:

One Response to “INJURIOUS — “ABOMINABLE EXTERMINATION THROUGH UNCANNY PASSAGES””