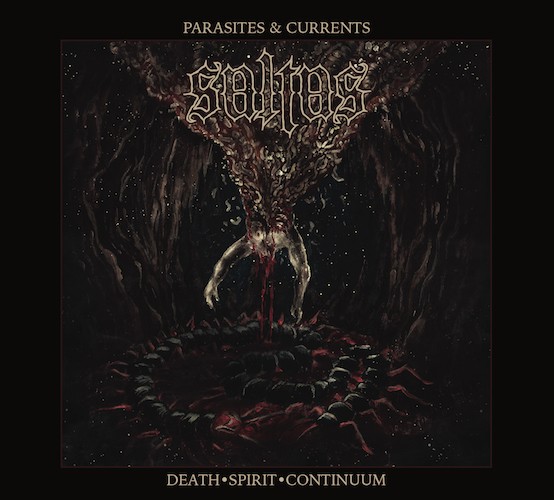 It’s fascinating how just a few slowly picked notes on a guitar or bass, when tuned a certain way, corroded with distortion, and allowed to reverberate like a tank-sized Geiger counter, can so quickly create a sickening feeling of dread. That’s how “Death Spirit Continuum” begins, and it only gets more unsettling as it moves forward, revealing buzzing and moaning riffs, the clatter of demented snare patterns, the emergence of a persistent double-bass rumble, and long, blood-freezing howls and guttural roars. These ingredients combine to create a deepening, and almost suffocating atmosphere of disease, decay, and desolation.

Your head will also move… and your pulse will also quicken when the drummer kicks the energy up… and the continuing toxic reverberations of that opening note sequence may lead to blood poisoning. And somehow — paradoxically and magically — this thoroughly queasy and emotionally unsettling song becomes hypnotic as well as unnerving, which is an impressive accomplishment.

The devilish forces who crafted “Death Spirit Continuum” chose the name Saltas for their collaboration. While this Swedish project is a young one, the members come from such respected underground bands as Irkallian Oracle, Runemagick, and The Funeral Orchestra.

Their debut album, Death•Spirit•Continuum, is in the nature of a compilation which collects the songs from the band’s two 2018 demos (Currents and Parasites, where this track first appeared in a digital and tape release) as well as a bonus track. It will be released on CD by Atavism Records this coming autumn, with cover art by Sang ho yoshihiro moon (Vhan Artworks).

Further details will be revealed in the weeks ahead, and to learn of those as they appear, watch these spaces: