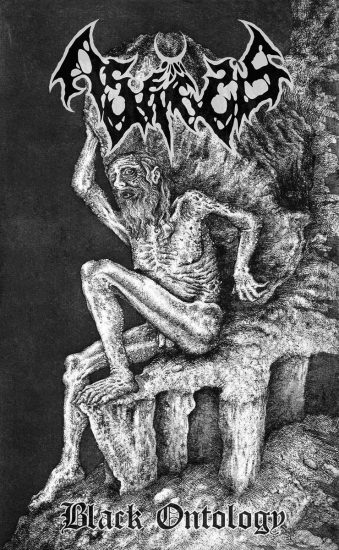 Roughly two years ago we had the pleasure of premiering The Path To Absence, a very impressive first EP by the Venetian band Askesis, which moved me to write: “The songs are dynamic and usually straddle the smoking crevasse between occult death metal and black metal, with a strong stench of doom in the mix as well. When the music is moving at full threshing speed, or bounding with punk-influenced rhythms, it gets the blood pumping… but the sense that something in the shadows hungers for your blood is never far away.”

Now it’s our good fortune to present a new Askesis EP, the name of which is Black Ontology, and it’s even more impressive than the previous one. The two women and two men in this band have succeeded in establishing their own distinctive “personality”, crafting a sequence of songs that continually brings the word “sorcerous” to the mind of this writer. It’s packed with physically arresting (and constantly changing) rhythms, yet it also creates atmospheres of brooding menace and of fiery infernal celebration, like the accompaniment to witches and warlocks cavorting around a pyre whose extravagant flames spear upward into the night sky. 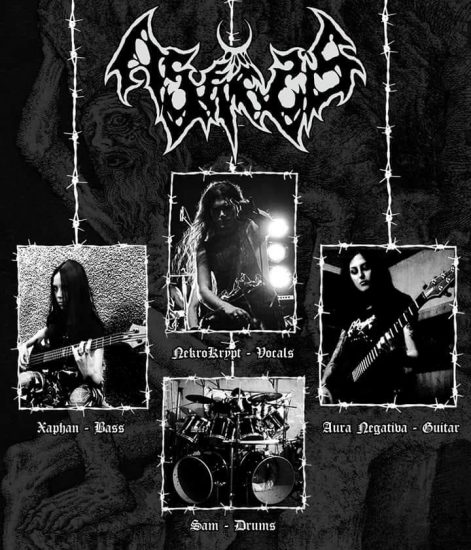 The experience begins with an intro track which makes clear you’re about to enter a realm governed by black magic, where horrors and revelations await. The cacophony of sounds is unsettling, with the collage ranging from abrasive shrieking tones to deep bubbling noises, from crocodilian growls to echoing pronouncements, from warbling shimmers to chilling void-like echoes.

The first full track, “Retaliation“, introduces the listener to the thick, murky tone of the band’s riffs and to the attractions of the rhythm section — the constantly shifting drum patterns and tempos, and the bubbling, darting presence of the bass, which is pleasingly noticeable. The guitar work both here and in the songs to come is twisted, often intricate, and indeed sorcerous, while the vocals are ghastly expressions of roaring and howling insanity. There is a physically arresting quality to the song’s changing momentum, and the aroma of an occult celebration hangs about it as well.

The slower, lurching movement at the opening of “Creation of Non-Existence” provides an effective contrast to the preceding track, and it quickly establishes a mood that’s both spooky and hypnotic. But soon enough an eruption of double-bass and snapping snare strikes combined with boiling riffwork sends the music into a whirling frenzy, as the vocalist delivers his proclamations in imperious, bloodthirsty blasts and the lead guitarist sends a queasy melody slithering through the changing tumult like a viper calmly making its way through a riot zone, injecting poison as it goes. All the while, the music seems almost choked with hallucinatory vapors.

By this point, this writer was perched on the edge of his seat, eagerly waiting to discover how Askesis would end this fascinating foray into supernatural dimensions, and the title track “Black Ontology” provided a very satisfying answer, creating an aura of ecstatic lunacy mixed with the chill of impending premeditated murder. Launched with a buzzing riff, a thumping bass drum, raw howls, and a demented flickering lead, the gait of the song changes in electric fashion as more tendrils of queasy melody surface and submerge. It’s the kind of song one could imagine igniting a moshpit just as effectively as it’s converting the listeners’ brains into quivering and spinning masses of bewildered neurons.

To repeat: This really is distinctive music, satisfyingly different from the more typical amalgams of black and death metal. And while I found myself greedy for more tracks after Black Ontology ended, I’ve finally concluded that its compact length is fine enough as it is. It’s not a bad thing at all to create a release that leaves listeners hungry for more and curious about what the band will do next, and Askesis have certainly succeeded in doing that.

Black Ontology is available now on Bandcamp. The cover is a DS Art print, “The Myth of Sisiphus” (etching and aquatint).

2 Responses to “AN NCS PREMIERE (AND A REVIEW): ASKESIS — “BLACK ONTOLOGY””