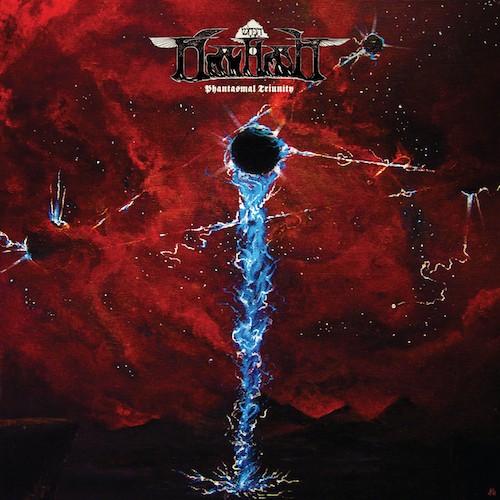 Some weeks it seems I find a new favorite band as often as the sun rises. Today, that band is the Norwegian trio Nachash. And in their case I have no doubt they will keep a hard grip on my loyalty for many sunrises to come. This new song we’re about to present from their debut album Phantasmal Trinunity (due for an August 10 release by Shadow Kingdom) is a prime example of why that is. Its name, which is an immediate clue — but only one clue — to what the music delivers, is “Vortex Spectre“.

Combining elements of black metal and death metal, the music is decidedly supernatural in its atmosphere, but the band also display a keen grasp on the irresistible pull of propulsive rhythms and hook-laden heavy-metal riffing, and the result is a track that’s powerfully addictive. 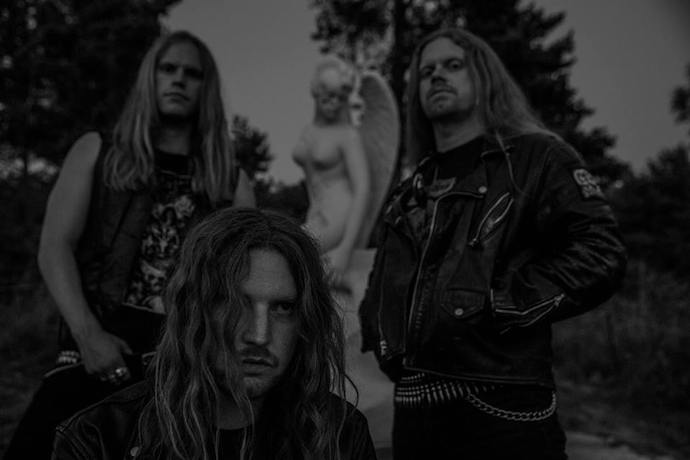 “Vortex Spectre” is definitely a riff-driven song, and the riffs are persistently electrifying, but there’s more going on here that strengthens the music’s magnetic appeal — including a big, gravel-chewing bass presence and pin-point drum-work that pushes and pulls the energy of the music in just the right directions as the galvanizing guitar work morphs the song into changing shapes.

The track’s long introductory segment does a fine job seizing attention at the same time as it gradually builds anticipation through a mid-paced, bounding rhythm and ringing chords that become increasingly frenzied and explosive. With the vocalist’s long, wrenching howl, the song shifts into another riveting riff, and the vocalist eventually takes center stage, articulating the lyrics in a gnasty reverberating snarl that’s part battery acid and part blood-lust.

The riffing continues to shift and ensnare the listener, and then the music really begins to romp and rampage and riot, becoming a thrashing conflagration of fire and fury. When the pace slows to a head-nodding gait, filaments of paranormal fretwork spiral and subside in hypnotic fashion — an eerie break before the band start thrashing again.

To repeat: this really is an electrifying track — sinister and slashing, grimy and grandiose (to borrow some well-chosen words from Shadow Kingdom’s PR materials). And it’s not the only track on the 37-minute album that provokes such thoughts. I’ve included one more previously released song for you to hear (“Apex Illuminous”) along with our premiere, to give you a further taste. In an effort to find reference points, the label’s press representative mentions such bands as Grand Belial’s Key, Ares Kingdom, Mortuary Drape, Varathron, and Sacriphyx.

P.S. This isn’t the first time Nachash has become my new favorite band. They did that once before when they released their debut EP, Conjuring the Red Death Eclipse, in 2015 (reviewed here). And if you haven’t heard that, it’s well worth your time (use the Nachash Bandcamp link below).

Shadow Kingdom will present Phantasmal Trinunity on CD, LP, and tape, as well as digitally. Look for it on August 10th, and pre-order through the links below.