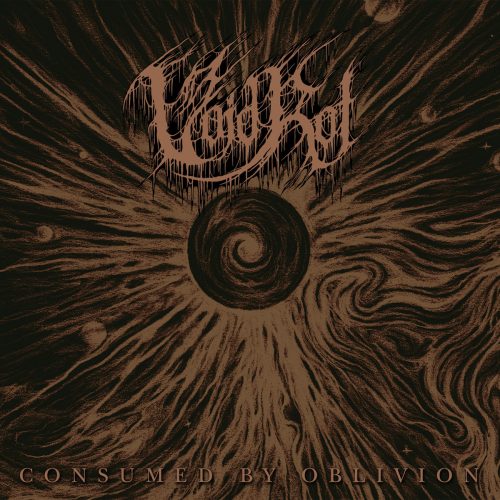 Consumed By Oblivion is both the name of the debut EP by the Minneapolis band Void Rot and a synopsis of the atmosphere created by the band’s titanic, soul-consuming brand of death/doom. When the title track surfaced earlier this month, it seemed to capture the sensation of being swallowed by a cold, hungry void and allowed to slowly rot. Massive and monstrous, heavy enough to crack bedrock and sickeningly morbid enough to sink all your hopes, it also transformed into a spine-shaking, head-hammering, skin-scissoring marauder, laced with buzzing riffs and squalling leads that sounded like pure evil.

That was a tantalizing (and mortifying) teaser for this new record, and today we have another, as we premiere a song called “Ancient Seed” in advance of the EP’s joint release on August 3rd by Everlasting Spew and Sentient Ruin.

This new track is a hopelessly bleak, murderously punishing piece of music, and one that sends the mind reeling into outer darkness. Ominous, dissonant notes peal out like a cracked and twisted horn over slow, earth-quaking bass notes and the methodical crack and thump of the drums. When the gravel-textured, roaring vocals kick fully into their horrendous proclamations and the drumming becomes more plundering, a vicious tremolo riff takes over, with a swirling lead guitar rising like glowing sulphurous fumes from a lava vent.

Chords ring out in a grim, doomed dirge, and a queasy lead oozes a combination of pestilence and misery — but violence lies around the bend. After a bridge in which the drums give way to the snick of the cymbal, and the music seems to groan in agony, you’re fed into the hungry maw of neck-snapping blast-beats and roiling guitar abrasion.

Consumed By Oblivion is recommended for fans of such bands as Spectral Voice, Hooded Menace, Anhedonist, Inverloch, Indesinence, and Krypts. It will be released on August 3rd digitally, on CD, and on tape, with a 12″ vinyl edition expected early next year. The distinctive (and chillingly evocative) album art and logo were created by Stephen Wilson (Unknown Relic).