(Here’s Andy Synn’s review of the new album by Skeletonwitch, which will arrive on Friday of this week via Prosthetic Records.)

By this point, with the album’s release but a few scant days away, you’ll likely have seen and read a number of different reviews and opinion pieces about the new Skeletonwitch, some of it positive, some of it negative, some of it… a little hard to follow.

But if all that confusing, back and forth coverage has got you turned upside down, to the point where you just don’t know what to think, then fear not! I’ve got you covered with what promises to be the definitive take on the album. 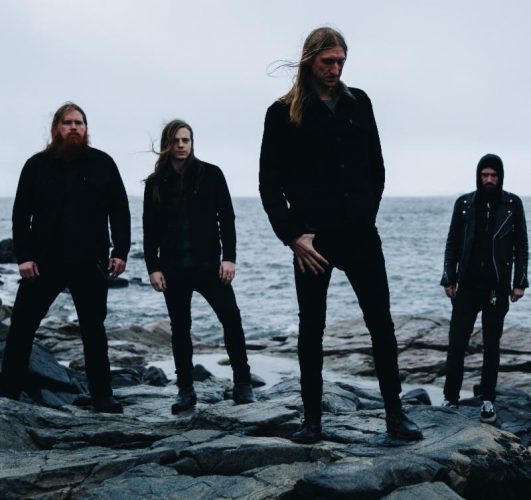 First and foremost, let me point out something which I feel has been missed by a lot of reviewers… Devouring Radiant Light finds the Skeletonwitch crew sounding a lot like early-2000s period Enslaved.

It’s not just down to the Kjellson-esque vocals of Adam Clemans either. The whole album, with its longer, more intricate songs, increasingly blackened vibes, and greater use of proggy melody, is just so redolent of their Norwegian forebears that I’m honestly surprised it hasn’t been mentioned more frequently elsewhere.

The bleak, moody melodies, winding bass-lines, and icy, snarling vocals of opener “Fen of Shadows”, for example, would fit in almost seamlessly on an album like Monumension or Below the Lights, while the free-flowing gallop of “Temple of the Sun” (complete with some soaring, Ice Dale-ish lead guitar work and an unexpected splash of surprisingly effective clean vocals) and the sombre introspection of the title-track could just as easily find themselves a comfortable home on Isa or Ruun with a few minor cosmetic tweaks.

It’s not a complete transformation, of course, as there’s more than a fair bit of the classic ‘witch sound still present on tracks like “When Paradise Fades” and “The Luminous Sky”, which bring back a bit more thrashy bite and rock ‘n’ roll swagger into the mix, but, for the most part, Devouring Radiant Light is a much more ambitious album than its predecessors – songwriting-wise at least – and one which sounds very much like the band are in the midst of their own personal renaissance.

But therein lies the rub. As good as this album is (and when it’s firing on all cylinders, such as on the shamelessly epic “The Vault”, it really is a killer piece of high-quality Heavy Metal), it also still feels like the product of a band still in transition, and the widening divide between the proggier, more blackened style of tracks like the aforementioned “Temple of the Sun” or climactic closer “Sacred Soil”, and the more straightforward, stripped-back approach of songs such as “Carnarium Eternal”, only becomes more noticeable (and potentially more divisive) with every listen.

In the final reckoning, however, it’s hard not to see Devouring Radiant Light as something of a rough, slightly unrefined, gem of an album, one which – despite its flaws – is not only extremely enjoyable in its own right, but which also opens up new paths for the band to explore in the future.

Yet it also raises a difficult question for the band going forwards – how much of their old sound, and how many of their old fans, are they willing to sacrifice in pursuit of new creative and artistic avenues? I suppose only time will tell.