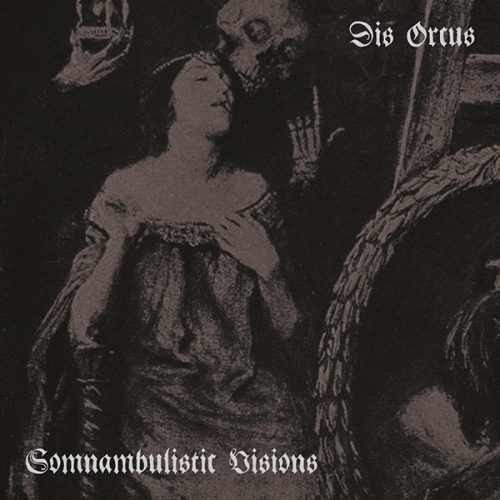 Most of us who are devoted to music from the black realms have at least a vague idea of what’s intended by the phrase “atmospheric black metal”. That’s probably not the correct genre description for Somnambulistic Visions, the debut album by the Ukrainian band Dis Orcus, yet the music is so persistently creepy, so cold, so stricken with a feeling of encroaching inhuman horror, that its success in creating a nightmarish, vampiric atmosphere is one of its signal accomplishments. True darkness is to be found here.

The songs are almost entirely mid-paced, the reverberating drums devoted to relatively simple rhythms that are somewhere between rocking and ritualistic. There’s virtually no blasting, no displays of physical excess. The beats are not exactly metronomic — they’re too unpredictable for that, too peppered with short snapping tones and bursts of double-bass rumble or martial tattoos — but they don’t get in the way of the main design of the music, which (as I perceive it) is to freeze the blood and to draw the mind into a hideous hallucination. (At the same time, however, they’re very effective in getting your head moving.) 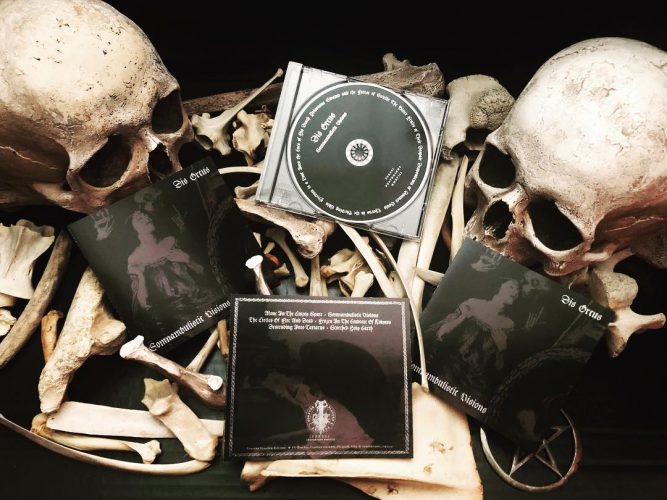 With these stripped-down rhythms providing the decelerated drive, the instrumentalist of the band (Haruspex, known for his work in Primogenorum) delivers a combination of deep, cold, slow-moving riffs paired with high seething ones, the lower ones grimly rising and falling, the higher ones boiling like poison in the veins. From those ghastly buzzing riffs, ghostly shimmering tones emerge, coming and going like phantasms, enhancing the music’s spectral, supernatural quality.

Some of the songs are slightly slower and more horrifically ominous and doomed (“Descending Into Tartarus”, at least at the beginning), and some are slightly more hard-rocking, lusting, and deranged (“Frozen In the Ambrace of Kokyto”), but all of them combine to pull the listener deeply into the band’s skin-shivering moods.

As frightening as the music is, there’s nothing more frightening than Lucifug’s vocals. His hateful, horrifying shrieks and gruesome, ghastly howls echo across the instrumentation in livid manifestations of chaos and corruption, usually intelligible in their fearsome proclamations. Despite the album’s overarching frigid and macabre atmosphere that persists throughout, Dis Orcus do also manage to summon sensations of chaos, without ever erupting in mayhem, and those horrific vocals are a key ingredient in doing that.

Even the closing track, which brandishes the name “Scorched Holy Earth”, never accelerates past a moderate pace nor directs any kind of sonic flamethrower against your eardrums — though it does include a small burst of blast-beat percussion. Instead, it derives its scorching quality from the authenticity of its powerfully malefic spirit, the lunatic heat of its terrifying vocals, and the febrile buzzing of its poisonous leads. It might well be both the most frightening and ultimately the most seductive track on the record, thanks to the rippling melody that brings the song, and this terrifically pitch-black album, to a close.

Somnambulistic Visions will be released on July 27 by Forever Plagued Records. You’ll find the full stream below — play it loud and in a very dark space for full effect.