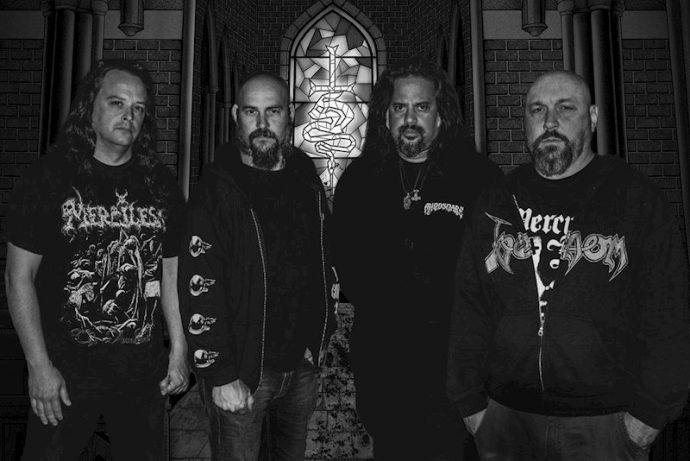 It takes a lot of skill and a lot of experience to do what Cleveland’s Shed the Skin have done, to make a death metal album that sounds like a heavy metal classic right out of the box, a fist-pumping, mosh-triggering, high-octane thing that’s part-anthem and part-homage to venerated traditions, but doesn’t come off as a formulaic re-tread. It has authentic spirit, tremendous energy — and it’s damned vicious, too. You can see the miles on those faces up above, but the wear plainly hasn’t worn them out — far from it.

The experience shows on the faces, but it’s on their resumes, too. This veteran line-up consists of Kyle Severn of Incantation on drums, Matt Sorg of Ringworm and Blood of Christ on guitars, Ash Thomas of Faithxtractor and Vladimirs on vocals and guitar, and Ed Stephens from Vindicator on bass. Together, they’ve created something special with this second album, We Of Scorn, which will be released by Hells Headbangers on July 27th and which you’ll get a chance to hear in full, below the following blocks of laudatory text. 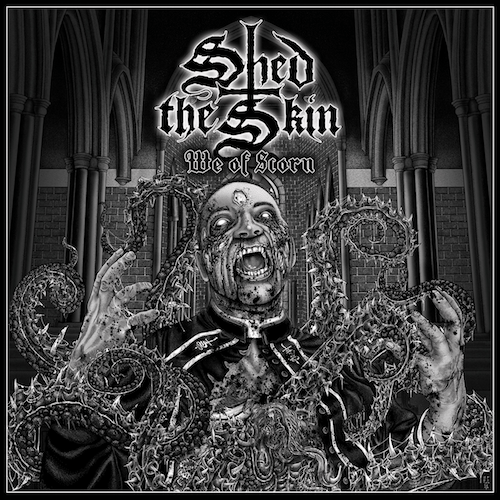 There’s a long list of things to call out in praise of the sequence of fairly compact songs on this album: the instrumental execution is nimble and razor-sharp; the vocals are utterly wild; the production is crisp but still with enough grit in the gears to underscore the music’s heavyweight viciousness; and the frequent soloing always sends an extra jolt of eye-popping electricity through the bloodstream. But perhaps the greatest praise must be lavished on the song-writing, because the music is dynamic, well-structured as well as hard-charging, and built around attention-grabbing melodies that combine in natural ways with the ever-changing and often head-slugging rhythms.

“From Tortured Realms” is a terrific album opener, the kind of track that my comrade DGR sometimes calls “a barrier to entry”, because it’s hard to get past it without giving it another spin or two. The slow and soulful strains of a classical string ensemble open the proceedings, and it’s very cool to hear the deep bass, the crashing drums, and a dismal dual-guitar harmony carry that melody forward. A darting lead forms a bridge and then continues, as the music becomes more fiery… and tortured.

It turns out this is all a prelude, albeit an electrifying one, because with a tortured howl to signal the surge, the song really leaps forward behind a charging riff, a battering rhythmic drive, and carnivorous, growled vocals that become double howls of fury. And then the pace and frenzy of the music increase even further, the energy amplified by a sequence of spiraling and fret-melting solos that are fire-bright.

Until near the end of the following two songs — “We of Scorn” and “Trepanning Sanity” — there’s no real let-up in the intensity. The former is a full-throttle adrenaline rush, galloping and thundering from the start, accented by an incendiary lead that sounds edged with despair, pushed by jolting and jabbing riffs and head-snapping snare work, and capped by a big headbanging sequence at the end. The latter is another all-pistons-pumping, road-eater of a track, flying high, galloping and thrashing and punching right up to the point when the band pull back, making open space for a dismal solo guitar and a desolate but majestic march to the finish. 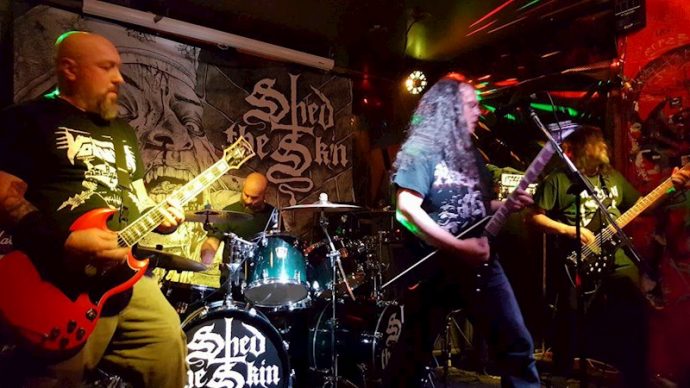 Some obvious care went into the arrangement of the songs on the album, because the stately pacing and gloom-shrouded finale of “Trepanning Sanity” carry forward through the beginning of “Tetrarchy Pact”, its mournful melody oozing an oppressive level of grief, the vocals sounding more stricken with wrenching pain than livid with fury. But just as the preceding track switched gears to give the listener a change of pace and a chance to breathe (even if uneasily), huge, thundering drum bursts and a flickering lead signal a change in this song as well, but it becomes more destructive and furious, the aura of grief becoming more anguished and frenzied.

And with that, Shed the Skin are in full-throttle mode again, and for a while. The opening of “Legion Of The Scorpion” revs like a road hog ready to jump as soon as the light turns green, and surge it does — the drums blasting, the rhythm guitar grinding and mauling, the lead guitar pulsing. The music becomes a rushing gallop, with fanfares of twisting melody capped by a gloriously epic solo, leading to a blasting, hard-muscled brawler of a finale. And “”Luminous Transgression” keeps things going hard, delivering another surging gallop that becomes a hugely headbangable freight-train rail-eater trailing flames, with an array of sparkling solos to push the abundant energy into overdrive.

You can almost tell that it’s time for a shifting of gears again, even before it happens — and it does. While “Serpentspawn Upheaval” starts in another high-energy onslaught of vicious riffing and battering rhythm work, the song becomes an alternating sequence composed of a dismal crawl, the guitars delivering a harmony of moaning and wailing, and bursts of brutal pile-driving lit up by truly insane vocal extremity and freakish, unnerving soloing. And because the song still apparently wasn’t dynamic enough, this one ends in a bout of punk-like scampering paired with moments of nasty seething riffage.

The twists and turns continue. The band launch “A Stone Awoke The Titans” with immediate flurries of arena-ready soloing and a fast, piston-pumping, headbang-triggering attack. Thanks in part to a pair of speedy, exuberant solos, the song soars with abandon, while the follow-on track, “Remonstrating The Preserver”, begins as an ominous, mid-paced crusher that casts an aura of infernal grandeur — before it begins to scamper and swirl, to lope and seethe in sinister fashion, to gallop in a warlike rush, and then to segue into an off-kilter bounding and whirling thing.

I half-expected that the closing track, especially with a name like “Forever”, to be a sharp departure, but it turns out to be one of the most rabidly vicious tracks, full of crazed, shrieking vocals and eruptions of blasting drums and frenzied, buzzing chords. Even here, the band pay attention to the power of melody, and the song includes a melodic component that’s menacing but grand. In one final twist, most of the band (but not the vocalist) slow the pace for one last lashing of gloom.

Enjoy our premiere stream of We of Scorn below, and if you like what you hear, pick it up via the link below. It will be out in a blaze on Friday.

2 Responses to “AN NCS ALBUM PREMIERE (AND A REVIEW): SHED THE SKIN — “WE OF SCORN””