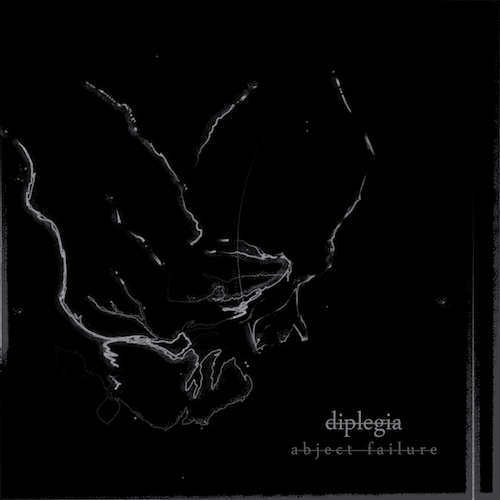 Diplegia, who hail from Troy, New York, made their recording debut in 2017 with the release of an EP named Squander. Since August of last year, they’ve also released two singles from a forthcoming album — “Follow” and “Bitter” — and we wrote about each of them in our SHADES OF BLACK columns (here and here). The name of the album is Abject Failure, it will be released on September 21st, and today it’s our pleasure to premiere a video for a third single from the album, a track named “Self“.

Through the first two singles from the album, Diplegia proved themselves adept at combining depressive black metal and doom to create music of dark intensity and spellbinding beauty.

“Follow” is a full-throttle rush for the first couple of minutes, with the kind of cauterizing vocal shrieking that characterizes DSBM and a gripping, sorrowful melody that courses through the tumult. After that powerful start, there’s a beautiful acoustic interlude with a still-sad but introspective feeling, followed by a head-hammering groove that’s infiltrated by a comparatively slow and soft clean guitar motif.

“Bitter” is indeed a portrayal of bitterness and gloom. Moving at the pace of funeral doom, it oozes long wretched chords and slow moaning melodies, topped by the incinerating intensity of the vocalists’ throat-ripping agonies. The song itself grows more intense in its atmosphere of desolation as it approaches the end, and it also becomes even more mesmerizing as the guitarist’s bleak but soulful lead seeps ever further under the skin.

And now we come to “Self”, which again contrasts haunting beauty and harrowing extremity. The rippling, reverberating guitar notes and slow bass pulse that begin the song have a ghostly, moody atmosphere, but while that entrancing but unsettling melody continues to carry forward, the music takes a decidedly darker and more desolate turn, creating a sense of tension and mounting despair. And while that unnerving aspect of the sound never completely disappears (the vocals, as before, are skin-stripping in their intensity), the song also carries the listener aloft through a soaring yet melancholy melody and becomes soft and wistful at the end.

The video is equally well-made, with the layered and shifting images of the band performing the song cast in shades of color, and of darkness and light, that coalesce with the moods of the music.

Enjoy “Self” below, and in case you missed the two previous singles, we’ve included those as well. Abject Failure will be available for pre-order today via Bandcamp ($4.99 digitally and $8.49 for a physical digipak).