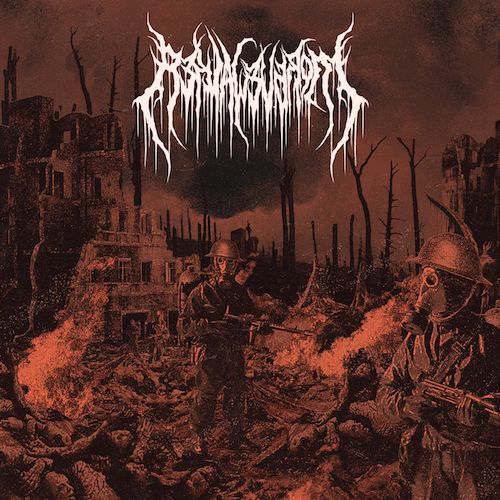 The ghastly scene of bombed-out, body-strewn destruction depicted on the cover of Morgue Walker‘s new EP, Forage the Ash, serves as an accurate visual representation of the music, and of the effect it might have on your quivering brain. Their brand of blackened deathgrind is poisonously toxic, ghoulishly malignant, and viciously obliterating. But don’t take our word for it — listen to the track we’re bringing you through this rare Saturday premiere: bow your heads and prepare to enter the “Ghoul Cathedral“.

This new band from the Carolinas features members of Putrefying Cadaverment, Hateful Transgression, and Mysteriarch, and Forage the Ash is their debut release — a five-track attack that will be released on August 30 and is available for pre-order as of today.

As displayed on “Ghoul Cathedral”, Morgue Walker‘s tools of the trade include corrosive chainsawing riffs with a tone that brings HM-2 ear-wreckage to mind; full-throttle drum battering; alien tendrils of freakish melody; and a horrid vocal menagerie that encompasses ugly reptilian shrieking and snarling, monstrous roars, and gruesome guttural growling.

When operating in full-on attack mode, the music is a racing storm of savagery, with warped riffs within the war zone that seem to moan, groan, slither, and wail. When Morgue Walker ease back on the throttle, the music transforms into a grim, macabre lurching movement speared by shrieks of guitar torture; and at the end the band pound away like a phalanx of brutish jackhammers.

What a tasty preview of this nasty new EP, which we’ll be eyeing like a serpent that’s coiled in the corner preparing to strike.

The EP’s cover art is by Cryptworm. It’s available for pre-order now, both digitally and on CD.

One Response to “AN NCS PREMIERE: MORGUE WALKER — “GHOUL CATHEDRAL””