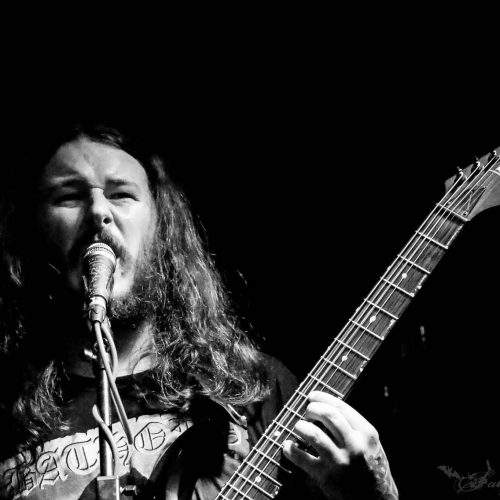 (Andy Synn’s guest in this week’s edition of WAXING LYRICAL is vocalist/guitarist Cody Daniels of the Texas band Giant of the Mountain.)

Texas metalloids Giant of the Mountain have been a band we’ve followed here at NCS for quite some time, and our very own DGR recently reviewed their latest (and probably best) album, Nature’s Wrath, describing it as a complex and creative piece of Prog/Black Metal that “takes on a hypnotic quality as it traverses down the multitude of twisting and winding paths within each song”.

So I thought, why not keep the coverage and momentum going by getting the band’s guitarist/vocalist Cody Daniels to sit down for a few moments and pen us some thoughts on his lyrical process, his love of hooks, and the important contributions of H.P. Lovecraft and Spongebob Squarepants to the band’s conceptual evolution?

Technically, I started when I was 10 and coined the hit “smells like a stinky fish” on an old acoustic with 4 strings, but as long as I’ve been trying to play music, I’ve been writing lyrics.

Guitar came easy to me (and is still the most fun), but lyrics have always been the hardest part of writing a song.

Giant of the Mountain is my baby, and basically where all my ideas go. After I write lyrics, we print it up on a huge poster and hang it in the band room, and I always ask for any critique for spots that seem funky.  I feel like if there isn’t someone else who can proofread, point out redundancies, and make sure I’m not making word-salad I would run away with ideas and keep too much crap.

It’s hard not to fall into the trap of phrases that are just words that sound cool together and seem relative to any theme or topic, but Randi [Matejowsky] is really good about catching things like that.

It’s hard to say specifically where inspiration comes from nowadays other than to use some general term like “life”.

The idea of Moon Worship was inspired by an especially large moon out when I was walking my dogs.

Valley of the Rogue is an actual (beautiful) place we passed through on I-5 on our drive to Portland for our first tour.

Nature’s Wrath came about from living through a summer in Texas.  I kept thinking, “I wish I could bring down the cold north, and cool this bitch off!”. That gave me inspiration for a whole host of ideas, and that simple random thought snowballed into an entire concept for an album.

It started off as something simple and I built upon that idea and wrote something with a deeper meaning, but in a situation and theme that fits the tone of the music also.

My favourite lines are always the hooks. For example:

Borknagar’s “The Earthling” from Urd when they build up to:

I am the earthling
I am the weaver of the sun

Opeth’s “When” from My Arms, Your Hearse. I love how each song ends with the title of the next song.

When can I take you from this place?
When is the word but a sigh?
When is death our lone beholder?
When do we walk the final steps?
When can we scream instead of whisper?
When is the new beginning
The end of this sad Madrigal

Ihsahn’s “Called by the Fire” from The Adversary.

The sky is clouded and grey like a mirror
Dreams of celestial bliss buried deep
An invisible web of whispers
Spread out over dead-end streets
Silently blessing the virtue of sleep.

If you’re familiar with that last song and you didn’t read that and hear it in your head, you’re probably a robot. It’s not just melody and the rhythm of the words, but also the words themselves. They fit so perfectly into that space in the song, and it hooks in your brain and brings you back.

The most important thing (in my opinion) with any part of a song, whether its guitars, drums, bass, vocals, or whatever else, is the “singability”.  Is it something that can be remembered, or is it something that won’t stick to anything?

I love stuff that will stick with you.  I’ve even got a huge love for pop music for that reason.  Even if you’re going the most off the wall grind noise experimental whatever, if there’s nothing to remember you by, did you do a good job? 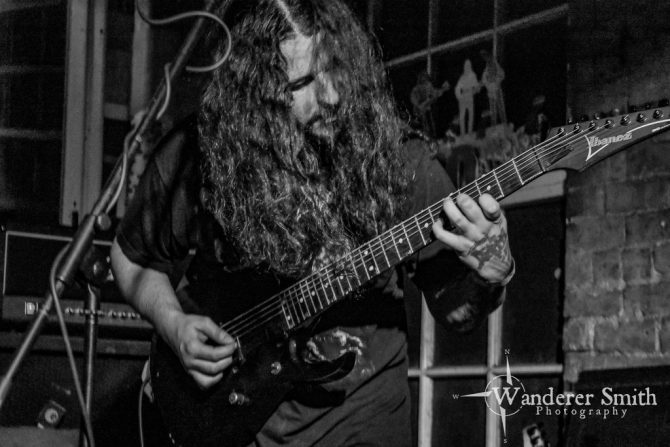 I used to write lyrics based on things I would watch/read/play like Lovecraft, The Elder Scrolls, historic events, Charles Babbage, and even Spongebob.

I used to write in the mythos of concepts other people created, but the last two releases of ours I’ve been going my own way. I still get inspired by things I read and watch, but taking from things like Lovecraft seems like I’m phoning it in now.

For example, I was watching The Little Hours, and the coven was dancing around the flame.  I thought when the blizzard in Nature’s Wrath hits the forest. I saw the snow whipping around the trees in a dance similar to the witch coven. I didn’t use the inspiration and run it through some Lovecraftian filter, but kept it with the concept of my own making.

Even though I’ve always tried to have a story in the lyrics, I usually would have one or two one off songs that were thematically similar but were outside of the concept.  Nature’s Wrath is the first album where every song is following a next step in the story.  I tried to write it so that the album reaches the climax of the lyrical story and the music at the same point.

Once I have the lyrics written, which usually comes after the music, we work as a band to make sure all the number of syllables in a phrase will fit in the music right.  In the past, I would try to stretch words over parts any way I could to get it to work, but that doesn’t flow as well most of the time.

The old song I’ve chosen is “Tormentor” from our album, Mother Hydra.  This is one song that people ask for a lot because it’s catchy, short, and fun.

The lyrics were inspired by the Spongebob episode where Squidward tells Spongebob that if he laughs too much he will lose his laugh box.  The end where Squidward woke up and had Spongebob’s laugh box transplanted brought me the idea of having a disease so tormenting that you do self-surgery on yourself and die to get rid of its torture.

You can see a continuity error from lines like “Reigning from your throat” (echoing back to the laugh box episode), but the chorus points out that it’s the spine that I’m removing.  I actually never thought about that until now honestly.

Again here the tumour is deep in my chest and I’m for some reason removing a spine?  This has examples of words used that sound cool, but don’t really mean anything.  I mean, can I get some dressing for this word salad?  The one thing this song has is a great hook.  The chorus is easy to get into and remember. It’s also a super fun tune.

This was definitely me trying to write as brutal as possible.  When we wrote this we were playing with a lot of TXDM bands.  GotM has covered a lot of different genres, and this last bridge of the song shows that by going from a Mastodon-inspired singing part, to a death metal middle sandwiched between another singing part.

This song, in the concept of the album, is at the climax. It’s when the cold winter winds suffocate the burning fires that have engulfed a land that was once a frozen mountainscape.

At this point in my lyric evolution, I’ve dropped the use of me, I, and you. Removing agency and writing lyrics from the perspective of an observer was a hard switch at first, but I think it’s more interesting.  It’s more serious as well, because this album reflects my feelings on things like environmentalism, climate change, and science denial, while remaining a frosty black metal album about nature.

That’s why I chose “Tormentor” as an example to compare, because it’s about Spongebob and doesn’t have as much depth!

I’ve also started using a lot more adjectives. I’ve learned that describing things more adds a lot more colour to the story, and is a good way to add syllables to a phrase that doesn’t quite fit that riff.

Remember, if they don’t serve the song, you’ve done it wrong.

Thanks for letting me be a part of this!  It was cool reflecting on my lyrics for once, because I’m a guitarist first at heart.

Be sure to check out our newest release Nature’s Wrath at giantofthemountain.bandcamp.com.

Also, make sure you support local shows, and buy the touring band’s merch!

One Response to “WAXING LYRICAL: GIANT OF THE MOUNTAIN”