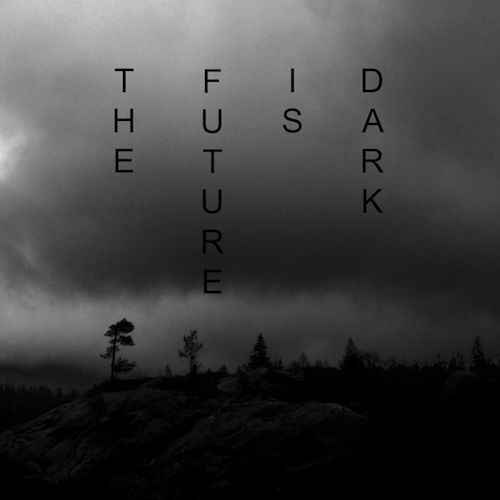 Stellar Descent’s first three albums ranged in length from 48 minutes to two hours. Each of them was a single track. So is their fourth album, The Future Is Dark, a single track of 46 minutes, the very definition of “long-form black metal”. For some who haven’t encountered this duo’s music before, that might be an imposing barrier to entry. I’ll try to explain why the time shouldn’t be considered a barrier at, but a key factor in the album’s considerable appeal.

The reasons why all those uninterrupted minutes should be welcomed, at least by those with a certain turn of mind, are necessarily explanations that can’t be validated by a mere five-and-a-half minute excerpt, but that’s what we have for you now. It’s at least a strong opening statement, if not nearly the whole case. 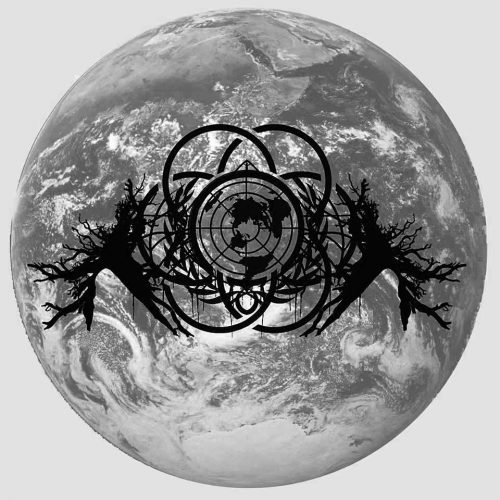 In the early stages of the song, things switch back and forth without warning, just like a light-switch being flicked on and off by an impulsive hand — if the light were the kind of enormous, upward-trained spotlight that seems to spear the heavens with brilliance as far up as you can see. It’s a movement between blinding incandescence and where-did-everything-go?. Later, it’s all just blinding… on and on… until things change again.

When the switch is on, the music really does blaze: Hammering drums going so fast they become a cyclotron that accelerates the blood; pulsing, heaving bass tones; abrading riffs that run together into one sandstorm of sound; scalding screams and wails so intense that the ability to form words surely must have been lost. All together, in Whitman’s words, these energies combine to sing the body electric.

But what sings in a way that becomes most wondrous is a final layering of sounds that shine through that tremendous torrent and grow increasingly entrancing — ringing tones that are enigmatic and vaporous, like the sounds of an apparition coming and going, or extra-dimensional tubular bells vibrating in and out of existence, or the aural equal of an aurora borealis shimmering in cascades of brilliant colors against an indigo sky.

Those ephemeral tones change, sometimes resembling the distorted, reverberating tones of a cello, or the rapid vibrations of gleaming guitar strings, the glistening of a singing bowl, the slashing of a Venusian harp (it sure as hell doesn’t sound like a harp made on Earth).

The future may indeed be dark — well, shit, there’s no maybe about it — but these parts of the song (to these ears) are not. Maybe they could be heard and seen as the last nova sunrise before everything goes black forever, or perhaps what might zoom past your eyes in the midst of a wormhole carrying you to Andromeda. But it’s not what I would think of as darkness in a conventional sense.

When the floodlight’s switch is in the off position, of course the light (and the sound) aren’t really off. It’s a matter of diminished intensity, and changing mood. In the less tumultuous passages, which come more frequently at first than they do later, different things can be heard — the warmth of the bass surfaces; droning tones rise and fall; brooding acoustic picking can be heard; electronic birds seem to be speaking to each other; the crack and crackle of thunder backs the chiming of dirge-like, dissonant shards of melody or spectral whispering.

In the final minutes, the flipping of the switch become a blur, the signal elements of the changing states merging, as a prelude to a final vaulting crescendo. The sensation is one of leaving the Earth behind, leaving it to its own darkness while you move among the stars.

Forty-five minutes of this… surely it drained the performers, left their skins on the floor, mere husks with a sheen of drying sweat, empty of bone and blood and tissue, it all having been spent. Forty-five minutes of this… you might think you’d get tired of it. Some might. Some definitely will not. There’s no way to tell the percentages of listeners who will fall into each camp. Some might eventually strike camp and retreat. I found the experience amazing.

There’s a lot to be said for music in which you can (or must) simply surrender yourself and become lost in it, music that takes you deep inside yourself, to those corners of your head that are rarely illuminated, or that casts your mind waaaaay the fuck out there… seemingly outside yourself. The only way these things happen in a deep way, whether it’s this kind of music or some other, is through the devotion of time. If you find the right guide, a guide like Stellar Descent, all the minutes pay off.

The Future Is Dark was mixed and mastered by Deha Lipani. It will be released by Sol y Nieve on September 27th. Pre-orders for CD and cassette tape formats will be available today via the link below. Digital downloads will become available at the label’s Bandcamp on the release date.

2 Responses to “AN NCS PREMIERE (AND A REVIEW): STELLAR DESCENT — “THE FUTURE IS DARK” (AN EXCERPT)”