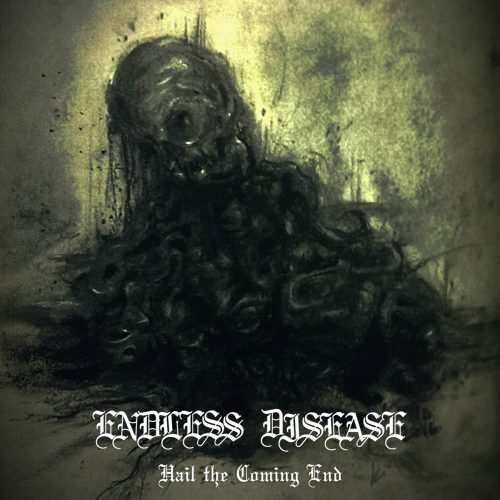 Destroy Your Fucking Life. Our Dawn Is the End. There Is No Hope. Supreme Misanthropic Darkness. And now Hail the Coming End.

Those are the titles of the releases so far by the Texas band Endless Disease, the last of which is out today. The titles alone, not to mention the band’s name, proclaim a world-view steeped in bleakness and boiling with disgust. If there is any hope here, it seems to be the hope that the pestilence of human existence will be extinguished sooner rather than later… and not one tear will be shed by this band when that day arrives. And therein lies a paradox about the music — because the music is electrifyingly alive, like a fight that will rage to the bitter end. 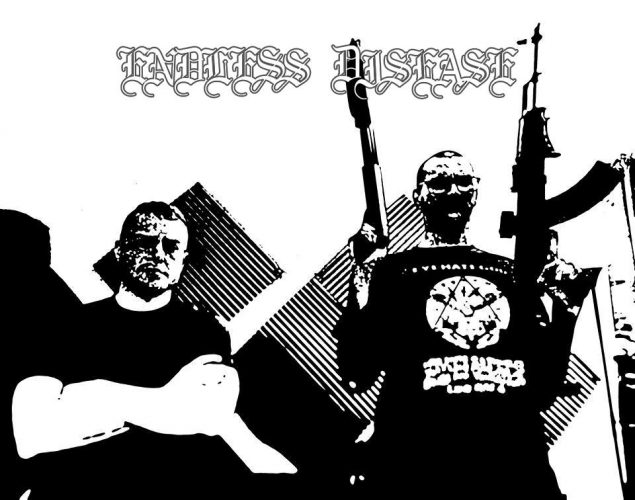 For those who might be encountering Endless Disease for the first time, it’s a duo consisting of guitarist/bassist/vocalist Ryan Wilson and drummer Shane Elwell. The former will be no stranger to many of you, since he’s also the man behind The Howling Void, Pneuma Hagion, and Intestinal Disgorge (among other projects). The latter has an equally long list of groups on his resume, including Intestinal Disgorge, Vaginal Bear Trap, and Excantation. What they’re doing with Endless Disease is, in their own words, creating “blistering d-beat black metal brimming with rage and violence”.

The fury and the savagery come through loud and clear in this new EP, Hail the Coming End, and so does the conviction that there’s no light at the end of this tunnel we’re living in. Both qualities are captured from top to bottom in the music — even in the guitar tone itself, which is both cold and grim, and as vicious as a cornered wolverine.

The music’s bruising hopelessness is unmistakable, especially when the band slow the tempo, turning themselves into brutish, stomping executioners, the riffs driving coffin nails or emitting a poisonous buzzing sound that summons visions of plague. Tendrils of sulphurous melody infect “Collapse”, and melancholy vibrations of anguish become the heart of “Every Beating Heart”.

On the other hand, as desolate and cruel as the music is, these songs punch the pulse damned hard. Elwell’s constantly changing drum rhythms (which move from blasting to d-beat to hammering) have a lot to do with that, as do Wilson’s frighteningly venomous vocals. The riffs are also galvanizing — jabbing and jolting, seething and whipping around like a downed power line that’s still full of juice, and including a dose of romping punk chords as well. The future may be littered with carrion, but the songs are ferociously alive.

Hail the Coming End features cover art by Kyle Otto. It’s out today, and available as a name-your-price download at Bandcamp.