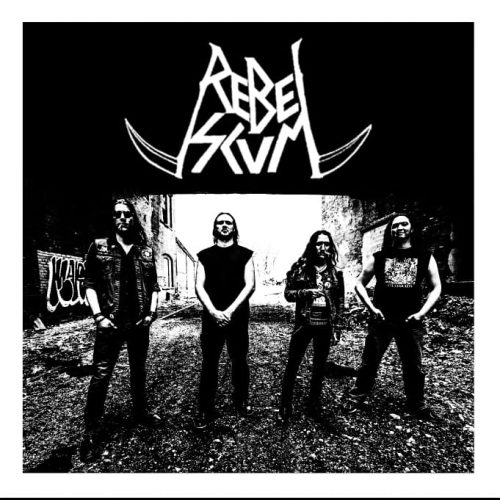 When we first encountered music from the blood-pumping debut album of Buffalo’s Rebel Scum two years ago, we were moved to write: “Rebel Scum are churning out some devilish rock ‘n’ roll that will make you want to get loaded, jump on a big, smoking chopper, and eat up the highway, with Satan as your co-pilot.” With one more short leap of imagination, we might also have referred to a full-throttle chase across a post-apocalyptic wasteland, the kind of marauding rush so vividly captured in the Mad Max movies.

We’re fiendishly happy to report that Rebel Scum are returning, and this time they’ve made that leap of imagination for us. On September 3rd they’ll be releasing a new self-titled EP, and the first single we’re bringing you today has a title that evokes the Road Warrior — “Guzzoline“. 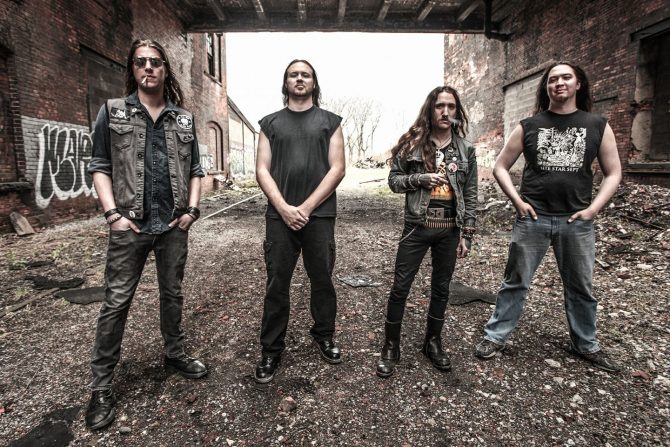 That word, of course, is a phonetic rendering of the life-blood over which the warring clans fought to the death in that blasted Australian wasteland. And the music itself puts you in the passenger seat of the mutated machines that turned the cracked pavements of that sprawling expanse into a battle zone.

Rebel Scum‘s mantra is “Sleeze, Speed & Rock ‘n’ Roll”, and “Guzzoline” lives up to the billing. It drives with primal power and is animated by a kind of feral lust, but there’s also something about the song that’s gloriously anthemic.

When the drums begin to tumble and the riffing begins to dart, it’s a prelude to Schmitt‘s blazing, swirling, string-melter of a solo, which helps push the song to new heights of wild, pulse-pounding energy.

Rebel Scum was recorded and mixed by Joe Leising at Rotten Metal Recording in Buffalo, NY. It will be released on September 3rd via Rebel Scum‘s Bandcamp page, and will be available on CD and cassette tape, as well as digitally. Rebel Scum are planning a small tour leading up to their appearance at the massive Full Terror Assault open-air festival on September 7 at Cave In Rock, Illinois. Keep an eye on these spaces for more info: