The debut album of the Texas death metal band Infuriate won’t be released by Everlasting Spew Records until the 31st of August, but we’ve already devoted quite a lot of attention to it, and are about to do so again. On July 2nd we premiered a track called “Juggernaut of Pestilence”; last week we published a guest review of the album in which our friend Vonlughlio proclaimed it his favorite debut album of all time (and yes, he keeps a list of such things). And today we have yet another premiere, one that showcases a merciless but enormously infectious track named “Mori Terrae“.

If you suspect that we’re just looking for fresh excuses to emblazon Jon Zig‘s remarkable cover art for the album at the top of our site, that would be a well-founded suspicion. But that’s not the only reason. The music is also just ridiculously good. 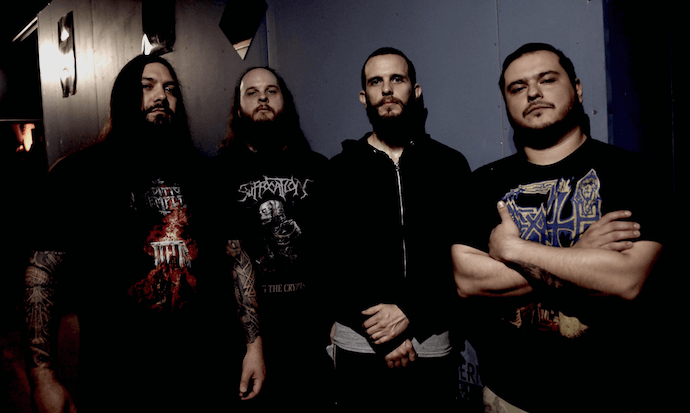 “Mori Terrae”, the third single chosen from the album, is a prime example of Infuriate‘s dynamic song-writing talent, their technically impressive performance skill, and their ability to merge brutal savagery with rhythmic and melodic hooks that leave lasting marks.

Speaking of hooks, there are many in this newest single, all  strung together in rapid succession in a way that jams each one under the skin and then digs them deeper every time they reappear: the feverish buzzing riff that introduces the song; the fleeting flurries of cold, cruel chords that accompany it; the intervening segments of jolting, piston-like battering; little wisps of melody that resemble dismal moaning; and other bursts of jolting yet insectile fret-skittering.

And to make the song even more addictive (and more adrenaline-triggering), the band puncture the listener with all these hooks while the rhythm section is putting on a show of their own. The nimble but granite-heavy bass notes make their presence felt right from the start, and the constantly changing, rocket-fast, impressively acrobatic drumming would steal this show all by itself if everything else weren’t so attention-grabbing. Meanwhile, the vocals are both utterly barbaric and as livid as a fresh gaping wound.

“Mori Terrae” is the kind of cruelty you’ll want to experience again as soon as the track ends, and it doesn’t wear out its welcome either.

For those who haven’t previously encountered Infuriate on stage or through their 2016 demo (which is available here), the band was founded in Austin in late 2015 and now includes an experienced line-up drawn from such other bands as Sarcolytic, Sect Of Execration, Images of Violence, ID, and Whore Of Bethlehem. As Everlasting Spew notes, their music is highly influenced by late ’90s death metal with a modern speed, and should appeal to fans of Suffocation, Deeds Of Flesh, Severed Savior, Unmerciful, and Disavowed.

Everlasting Spew will release the album digitally and on CD, with related merchandise, including this recently revealed long-sleeve tee, because if you’ve got artwork as good as what Jon Zig has created for this record, why wouldn’t you put it on as many items as you can? 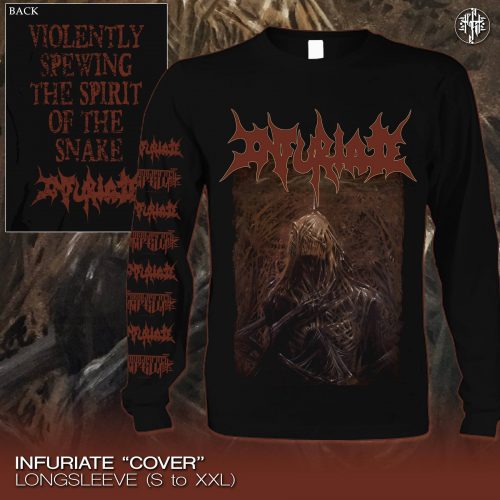 In addition to that attention-grabbing cover art, Jon Zig created images for each song, which will appear in the lyric booklet. The album was recorded, mixed, and mastered by A.R. Mendez. Check the links below to pre-order, and also check out the two previously released singles through the Bandcamp player we’ve added after today’s premiere stream.