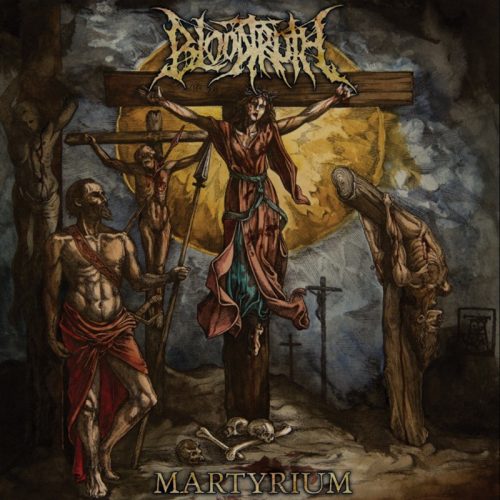 As a general rule, generalizing is fraught with risk. For every sweeping statement, someone will come up with a hundred exceptions. Yet there’s more than a kernel of truth in the observation that Italian death metal tends to live in the fast lane. It often seems like the Autobahn of death metal, in which bands with adrenaline for blood race so fast and furiously that the wheels leave the ground, trailing flames. Bloodtruth is a prime example of this phenomenon — and the explosive extravagance of their highly accelerated attack is indeed phenomenal. Witness this new song we’re bringing you today through a lyric video.

“The Last Prophet” is one of ten absolutely ferocious tracks on Bloodtruth’s new album, Martyrium, which will be released by Unique Leader Records on September 28th. Consistent with the overarching thematic concept of the album, it’s a lyrical sledgehammer against the edifice of the Christian Church and the historical atrocities committed by the Church against people branded as “heretics”. Musically, it’s a spectacle of fast-twitch muscle fibers in action, everything geared toward heart-pumping savagery and maximum destructive impact. 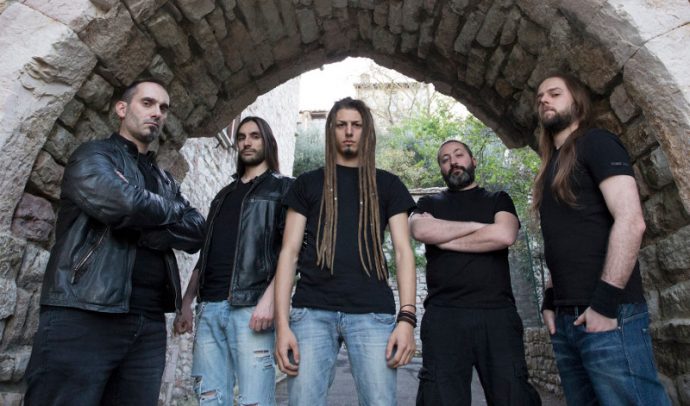 At its inception, Bloodtruth was linked to Fleshgod Apocalypse, since it began in 2009 as a side project of Fleshgod members Francesco Paoli and Paolo Rossi, along with guitarist Stefano Rossi Ciucci. With the passage of time, the line-up changed, and Stefano Ciucci is now joined on this new album (Bloodtruth‘s second full-length) by vocalist Luis Maggio, guitarist Stefano Clementini, bassist Riccardo Rogari, and drummer Giacomo Torti. And all of them seem immune to the normal limits of the human nervous system and musculature.

“The Last Prophet” goes so fast and with such unbridled savagery that it might suck the breath from your lungs. It definitely gets the heart racing and the eyes popping. The riffs and leads are a blur of supersonic fretwork that flickers and flies, darting all over the musical range with abandon. The bass notes are ejected with comparable nimbleness, and the drumming is breathtakingly fast and surgically precise. But punishment is part of the band’s mission statement, too, and so the song is periodically segment by bursts of accelerated jackhammering, and the throaty roar of Luis Maggio‘s vocals, which eject the lyrics at a pace that’s as furious as the speed of the instrumentalists, adds a further element of brutality to this onslaught.

Just before the two-minute mark, the band add a new dimension to this blistering attack through an eerie, exotic, impressively fluid guitar solo that moves from a slithering, spectral sound to a display of super-heated string-melting.

With respect to Martyrium’s conceptual focus, the band have commented:

“The main themes interlinking the wide range of subjects covered in Martyrium are human sacrifice, carnage and slaughter which the Christian Church carried out against all those found guilty of being ‘heretics’. In this album, historical and ethical relevance are both firmly bonded to the circumstances and facts mentioned in the lyrics. Bloodtruth decided to take into account some of the events narrated in the famous bestseller The Name of the Rose (Umberto Eco, 1980) and its vast number of historical and philosophical references, mostly focusing on the martyrdom topic too. The new artwork masterpiece, done by the highly acclaimed Peruvian artist Josè Gabriel Alegria Sabogal (Beheaded, Inferno) fits perfectly with this concept.”

To complete the work, Bloodtruth turned to the esteemed Italian producer Stefano Morabito of Rome’s 16th Cellar Studios (Fleshgod Apocalypse, Hour of Penance) for the mixing and mastering of the record. The album is available for pre-order from Unique Leader right now.

2 Responses to “AN NCS VIDEO PREMIERE: BLOODTRUTH — “THE LAST PROPHET””