It makes sense that the first demo of Zwarte Dood (Dutch for Black Death, though this project is Belgian) ends with a cover of a track by the infamous Ildjarn (a track I haven’t been able to find anywhere). Like much of Ildjarn’s music, Zwarte Dood‘s demo is an exercise in brutally distorted, minimalist, and palpably hostile black metal romping and rampaging. It’s crude and punishing, hateful and harsh — and in places, powerfully hook-heavy and head-moving.

The opener, “Aanvang“, lasts less than a minute, a stage-setter consisting or eerie swirling and shining ambient music, punctured by the slow strumming of reverberating strings, and elevated by something like the sounds of an angelic choir. After that, before you reach the Ildjarn cover at the end, there are two main songs with another kind of interlude in between them. 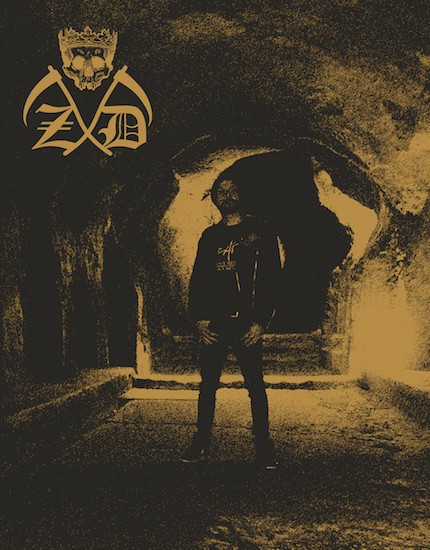 The title track, “Van Kaïn’s Zaad“, arrives after the opener with an unwelcoming shriek of feedback. And then Zwarte Dood sets the hook with a massively distorted, hard-rocking riff and a punk-like drum gallop. Augmented by throat-ripping vocal madness, the song is venomous, vicious, and hellaciously vibrant, a head-wrecking and head-hammering brawl. When it slows briefly, the music becomes ominous and brooding, and cold replaces the heat before that infectious main riff surges again at the end.

Then comes that second interlude, “Ik Roep De Duisternis Aan Me Te Omarmen“. There’s no detectible drum beat during the first half of the track, just ear-abrading feedback and the slow raking of corrosive strings, channeling a kind of seething, nasty, inward-looking lunacy. When the drums do surface, it’s a distant martial cadence, and after that the guitar screeches and shrieks and seethes, becoming more violent, more brain-mangling, and ultimately reaching a searing boil ugly enough to raise welts.

“Het Naamloze Pad” is more in the vein of the title track — another galloping, head-moving rush; another sharp-fanged, barb-hooked riff, one that’s just as corroded with distortion, just as venomous and battering. Eventually the music just runs rampant until the pace slows and the mood turns nightmarishly bleak before it kicks into rocking gear again. If there’s a voice in this one, it’s too distant for my abused ear drums to detect.

And this nasty mauler of a demo then ends with the Ildjarn cover, “Nacht en Mist“, which proves to be another hard-rocking, face-scraping, mind-assaulting, blood-rushing track, this one with a detectible lead that writhes and wails like an evil spirit. It gets the blood going, but a current of cold cruelty floods through these pulse-pounding chords.

Today is the release date for this demo. It’s being delivered by Signal Rex both digitally and on cassette tape, and you can grab those here: