By Plaguewielder’s own description, they’re “a three piece blackened sludge outfit from a decrepit mill town in Ohio”. As you might guess from that choice of words, the music on their new album Surrender To the Void is capable of descending to oppressive levels of torment and hopelessness, riddled with pain and a sense of bleak, hollow-eyed resignation. But that’s not all their music is about. It’s also fiery and fierce, with a bare-knuckled and bruising defiance in its sounds that’s capable of getting your heart racing and your head moving hard. And that still doesn’t exhaust where they take their songs, because there’s also something mystical about them, with strains of otherworldly melody that suggest visions beyond crumbling masonry, rusting equipment, and broken lives.

Plaguewielder’s success in creating such changing moods and musical textures in these seven tempo-dynamic, powerfully evocative tracks makes the album well worth hearing, and it’s one that does a great job keeping a tight grip on your attention throughout its running time. 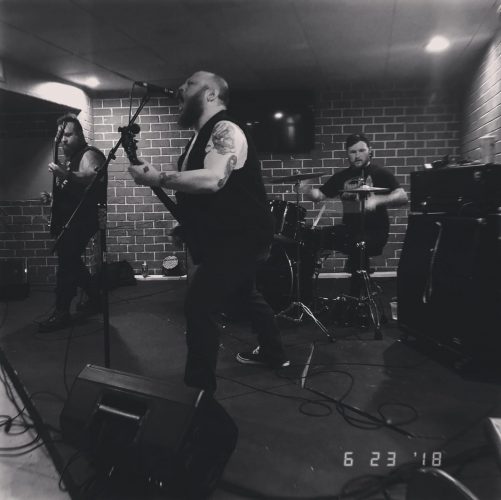 There may be only three people in the band — Bryce Seditz (guitar/vocals), Cody Cooke (drums), and Daniel Kuntz (bass) — but the music doesn’t sound “stripped-down” or minimalist. It’s obvious that a lot of thought and care went into making them what they are, even if the resulting impact is viscerally intense.

“Writhing in Mental Torment” and “Dripping Pools of Self Hatred” make for a powerful one-two punch at the outset. The former is a blaring, braying, head-moving rush that includes a galloping beat, raw vocal fury, and penetrating leads that create an unsettling sensation. There’s a venomous, borderline-deranged feeling to the song, but a bridge created by feedback and a bleak bass arpeggio takes the music in a different direction: It becomes a cold-blooded, mean-eyed, plague-wielding stomp. The follow-on track also changes — it’s gloomy and brooding, but also a head-moving rocker with clanging riffs and battering drumwork, laced with filaments of spooky guitar melody and woozy, reptilian leads and soloing that are part narcotic and part ghostly.

Following a a bubbling, skittering, uneasy little electronic interlude (“Scorn”), you come to one of the two best tracks on a very solid album (the other one comes at the end). “A Corpses Caress” proves to be hallucinatory but insidiously addictive. There’s a contrast between the rambunctious drum performance and the song’s gliding, alluring, but ominous guitar melody. And as the song changes, it encompasses feelings of dread, deep melancholy, and electrifying vibrancy. It also heaves, explodes, and soars. [Jeff Wilson (Abigail Williams, Ex-Wolvhammer, Ex-Nachtmystium) provided additional guitars on this song.]

That track is a tough one to follow, but “Howling Souls” holds its own as Plaguewielder present another dark, hard-charging, piston-driven piece that’s a real neck-wrecker, and it comes with blaring chords and a lead guitar that seems to glow with a feverish but unearthly heat, as well as truly anguished vocals. (Bryce Seditz‘s vocals, by the way, are off-the-charts intense all the way through the album.)

After another interlude (“Desperation”), a freakish and ominous little electronic concoction that includes a ticking sound which seems like the countdown to a bomb about to go off, the album closes with that second standout track, “In Depths of Cold Hell”, which again displays the dynamic songwriting that’s one of the album’s hallmarks. The song alternates. In part it’s a mid-paced back-breaker, driven by a bruising riff and a body-moving cadence, and in part it’s a rushing, rumbling freight train at full throttle, belching smoke and trailing sparks, and opening up your adrenal glands.

Throughout the track, eerie, mystical sounds come and go, and near the end, the music seems to descend into a pit of oppressive gloom, but then a synth channels beautiful, shining streamers of melody that give the song yet another dimension. It’s a very fine way to end this excellent record.

Surrender To the Void was recorded, mixed, and mastered by Matt Tluchowski. The cover art was created by Cody Cooke. The album was released via Bandcamp late last week, and it’s also available on CD from Fragile Branch. you can check out the stream below.