I have an ingrained habit when I’m listening to music that I’ve already decided I want to write about, probably not that different from anyone else who scribbles their thoughts about music for public dissemination: I make notes to myself as I listen (not the first time I listen, but the times after that). In my case, my notes take the shape of messages to myself, like one side of a conversation, or like a memoir — messages from a self that’s caught up in the immediacy of what I’m hearing to a future self that’s more considered and more calculating about how to express those thoughts to others.

The future self tries to turn such notes into something readable, and more reflective. On his best days, that future self tries to avoid the kind of track-by-track reactions that are there in those past messages, for fear that tedium would otherwise overcome the reader. The future self often fails in the effort to pull everything together in a way that’s concise and thoughtful; and even on the best days, words and phrases from the past self who was carried away by the songs survive.

But this time, for the first time I can remember in the 9 1/2 years I’ve been messing with NCS, I decided to just give you my notes, slightly cleaned-up, but still essentially the same words that poured out when I let this album rush through my head the second time I heard it. Why did I decide to do this, at the risk of losing all of you? 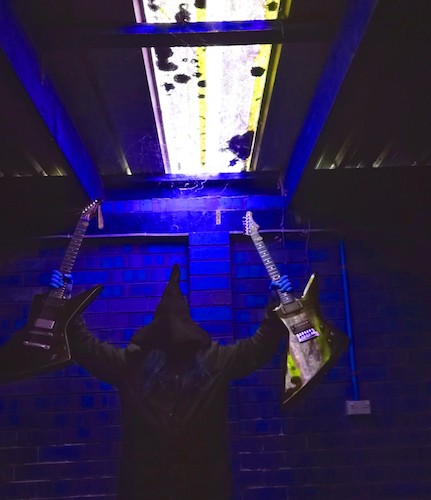 I did this because it seemed like the right thing to do, given the way this music was made. If you persevered and read through the very long interview between myself and NKSV that I posted yesterday, you’ll know that Rebel Wizard‘s songs on this new album, Voluptuous Worship of Rapture and Response, weren’t the result of calculation or careful planning. As he explained, this music was the result of just letting everything go and allowing the music to come as it would, without the constraints of concept or intention, and without worrying what anyone else would think of it.

And so, after making a start on the kind of review I usually try to write, I had second and third thoughts, and decided to do something similar — to pitch that partially completed draft into the terrible void where deleted bits and bytes go, and instead to take my notes, add some punctuation, turn some suggestive phrases into something closer to complete sentences, and just throw it out there.

I have a faint hope this will entertain some of you, but even if it doesn’t, it still felt like the right thing for me to do. And for those who don’t have the patience to follow what follows, just remember this: Voluptuous Worship of Rapture and Response will be released tomorrow, and you ought to go listen to it at this location when tomorrow comes [or now, at the bottom of this post]: 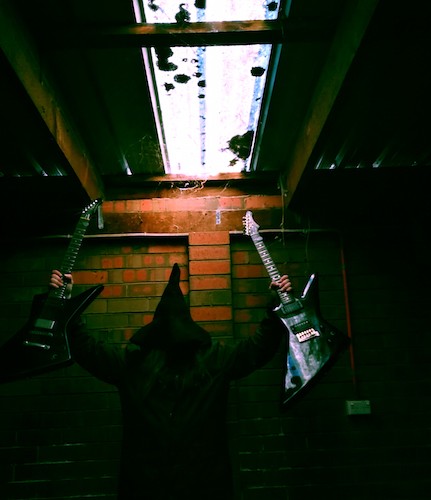 1. PERSISTING AS IT DOES

An introduction… a layering of bright, ringing acoustic guitar notes, a sample of a person speaking (I’m pretty sure I know who this from past researches into RW‘s music)… an electric guitar joining in. I feel the sense of being under a forest canopy, or perhaps in a dream of Middle Earth.

2. THE PROPHECY CAME AND IT WAS SOAKED WITH THE COMMON FOOLS FORBODING

Ah yes, the pulse and the punch, they arrive, with the sparkling, starburst vibrancy of a Rebel Wizard guitar lead, and the organ-rupturing thrust of the bass and drum, feeling the drums go crazy, hearing that lead spinning and spiraling and burning up in an incandescent ecstasy, hearing those wild, screaming vocals (you can also hear the gasps of breath that fuel the next nanosecond’s outburst). There’s a little bridge, and then explosive mayhem at the end.

3. HIGH MASTERY OF THE WOEFUL ARTS

What a nice, though brief, mystical solo at the beginning… and then comes the rushing rhythm, with interstitials of ominous threat. This solo, like most of them will, leaps out like a fire elemental, like a desert jinn from the Tales of the Arabian Nights. Rapid, jabbing notes… eruptions of decimating drum insanity… fanfare chords… battering snare strikes… what a brain-mangling, vein-bursting track this is, full of sudden twists and turns — including a concluding solo that blinks the eyes wide open.

4. DRUNK ON THE WIZDOM OF UNICORN SEMEN

The opening of this connects back to the opening of the album. I think this might be the most powerfully infectious track on a record that’s full of them — the kind of music that kicks your head back, sends your clawed hands skyward in that thing metalheads do when they’ve become enraptured in the presence of EPIC MUSIC.

Oh yes, it floods every orifice with unicorn semen and turns all those passageways to silver. But even this one is edged with a knife, the one it puts under your throat. Hellfire and damnation, that acetylene-bright solo is one that should be performed on some giant European festival stage, but never will be, and that won’t diminish it in the slightest.

5. THE POOR AND RIDICULOUS ALCHEMY OF CHRIST AND LUCIFER AND US ALL

For sure, this is definitely ridiculous, in the best way, a song that vies with the one before it as my favorite. An extended, darting, fire-bright solo rockets out over a machine-gun-fast barbaric riff and a hard-pulsing rhythm. The kind of slashing chords you imagine a rock god delivering with Pete Townsend windmill arm movements and a leg-splayed rock god stance.

A fast-stitching riff like a sewing machine the size of a car that goes faster than a V-8 Vindicator could drive it.

I’m not sure Christ is in this song, but Lucifer sure as hell is, and you and I are too, when we’re just at the top of a titanic orgasm.

6. MOTHER NATURE, OH MY SWEET MISTRESS, SHOWED ME THE OTHER WORLDS AND IT WAS JUST FALLACY

The sound of rain, and a strident speaking voice. A heavy chord, a mystical, reverb-laden solo. This one’s a more mid-paced jaunt at first, maybe a bit more gloomy than what’s come before, until the phosphorescence of a darting lead comes in. And maybe even now there’s still a bit of ache in those notes, maybe a feeling of more-than-usual abraded nerves in the voice, maybe a mood of betrayal in the soloing and rage in the ravaging riffs and decimating drum rhythms.

It seems cyclonic, and then it rocks for a bit, and then it becomes another anthem, and ends in a cacophony of apocalyptic, terroristic noise (a little reminder that this dude is behind Nekrasov too).

Oh man, after the last minute of that last song, which was like a kidney punch to the kidneys in your brain, here we go again — once more into the stratosphere, hanging onto Apollo’s chariot for dear life, getting close to the sun. Only two minutes, though, not quite close enough to burn up…. what a pity.

A few moments of destabilizing, dehumanizing noise, and then the song takes off like a jet. The voice is that of a maniac turning himself inside-out, the music manifesting as part tornado, part hammering machine… and oh shit, here’s another sweeping, darting, mystical, glorious solo… and oh fuck, an interlude of monsters vying for which one gets to eat your spleen.

9. VOLUPTUOUS WORSHIP OF RAPTURE AND RESPONSE

Here we have the title track. You can feel the wind and hear the thunder at the start, and a warped voice speaks. I can’t make out what it’s saying. And then here comes a scissoring riff that torques the tension, punctuated by braying notes. The music gets the adrenaline pumping, and builds fear, like you know there’s a fight coming and you may not be up to it.

And there’s another gleaming, head-back, eyes-closed, white-hot solo. Yes, it’s rapturous, like being transported into the midst of the Wild Hunt… and something might be slaughtered before the chase is over.

I’d like to find another word for all these solos besides “glorious”. How about “dazzling”, “delirious”, “radiant”, “heroic”?

How do you end an album like this? Of course, I already know what’s about to happen [this is, after all, my second run through the album]. He ends it with something imposing… a 9 1/2 minute track… and, as it turns out, something very different.

The echoing solo that launches this one channels a soulful and spectral feeling. It’s a feeling that’s forlorn, even tragic, but at the level of larger-than-life tragedy, something Shakesperean in scale. There’s a pulse-punching aspect to this song too, but more desolation in this one than in any of the others, a sense of the defeat that so often visits you despite your most desperate striving. But not a shriveling kind of collapse by any means, just a mix of frustration and exhaustion. Even the first searing solo is lined with grief.

In the middle, a voice begins speaking, I think the same one from the first track [I still have a guess about who it is, but let’s still leave the mystery in place]. It goes on, as the riff loops over and over like a mantra through the whole back half of the song.

There’s too much energy in this track for me to think of it as meditative, but it’s entrancing (and unsettling) nevertheless. This one has stayed in my head, because it’s so different. The voice speaks of the human condition, of suffering, despair, loneliness, unhappiness, sorrow, fear. That part of our constantly imperiled and fleeting existences is in the music too. And maybe the album is one person’s exercise in freeing himself from all of that.

I take NKSV at his word, that this music came from the throwing open of gates, that it manifested almost spontaneously from a multitude of realms of music and thought, the bursting forth of a lifetime’s most powerful experiences. You can hear the truth of that in the music.

But whereas an abandonment of impulse control usually leaves most of us in wreckage of one kind or another, this shredding of constraints and this triumph over self-doubt leads to magic — a metal fantasy, but one that challenges rather than panders, the kind of music that puts us back in those places when we first heard the kind of music that made our heads explode (whatever it might have been), but without employing the manipulative sappiness of nostalgia in the slightest.