Infestus may have reached the point when it is no longer fair to characterize the music as black metal, because as diverse as that genre of music has become, the term connotes limits that no longer seem applicable to this German band’s extravagantly multi-faceted new album, Thrypsis. Even Debemur Morti Productions, who will be releasing the album on October 5th, now refers to the music as Dark Metal — which is the amorphous banner we tend to hoist over music that we can’t easily (or accurately) categorize with more familiar metal labels, no matter how many hyphens they might include.

The further progression of ideas reflected in the music of Thrypsis will not come as a shock to those who experienced the stunning tapestry of desolation, malevolence, and bleak beauty rendered in the last Infestus album, 2014’s The Reflecting Void, yet it’s abundantly evident that Infestus has climbed to dizzying new heights on this new record. The song we’re helping to premiere today, “Thron aus Trümmern” is powerful proof all by itself. 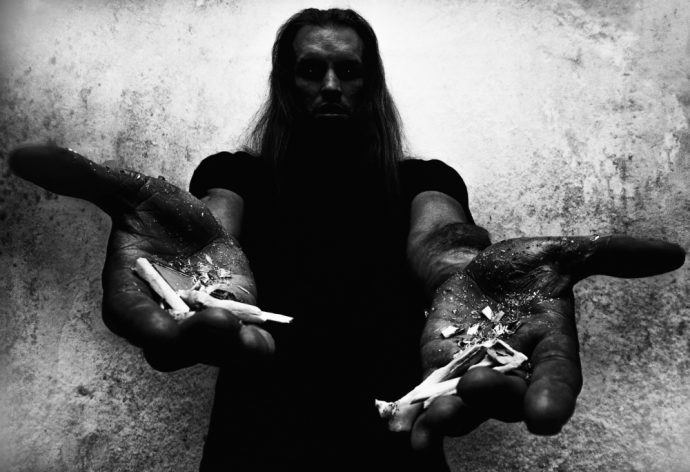 It might be possible to chart the meticulously plotted course that Infestus‘ sole creator Andras has followed over the course of these nine minutes, or to pick out the differing musical influences that he has braided together to create the changing patterns of sound and emotion revealed here. But it is the combined effect of what he has done that lingers so powerfully.

The song is elaborate and ever-changing, no question about that.  It is also persistently dramatic and penetrating. The changing atmospheres channel sensations that are moody and mystical, as well as tormented and tortured. The song plunges to depths of desolation and soars toward heights of anguished grandeur. As perilous and as emotionally wrenching as the music often is, it is equally dreamlike and even hallucinatory. And through all the contrasts of sound and intensity that the music creates as it winds its way forward, Andras unites all the morphing shapes and shades through currents of dark, painful melody that seep into the listener’s mind almost without any conscious realization that it’s happening, until he strips away all of the richly layered textures at the end, laying bare the heart-piercing core of the music that’s been there all along, through the reverberations of solitary piano notes.

One can eventually sit back and admire the sharp design and execution of the drumwork as it helps push and pull the music’s intensity through an array of vibrant and solemn rhythms. One can detect the ingenious layering and interplay of differing guitar tones — the integration of fantastically swirling arpeggios, mind-spearing fanfares, brooding and neck-snapping riff jabs, serpentine yet soulful leads, and much else. One can be chilled to the bone by the levels of pain and fury expressed with such livid power through Andras‘ shrieking and roaring voice.

But most of that only comes later, in a second or third listening of the song. But even when you try to concentrate on the finer points of technique and songcraft, after simply being immersed and transported the first time (and perhaps many times after that), the song still has an almost preternatural capacity to catch hold of your mood and carry it away, to put a spell in your head that tends to paralyze the capacity for rational thought.

And of course this is only one track out of seven. Other wonders await. In due course we’ll have more to say about the album as a whole. For now, we simply invite you to experience “Thron aus Trümmern” — and to read these few additional details about the album:

As noted, this Infestus album was solely composed and performed by Andras, who also mixed the album. He teamed with graphic designer (and Infestus live guitarist) Chris Ain for the artwork, and the record was mastered by Woodshed Studio. Debemur Morti will release the album on CD and vinyl, as well as digitally. The track list and pre-order links are below.