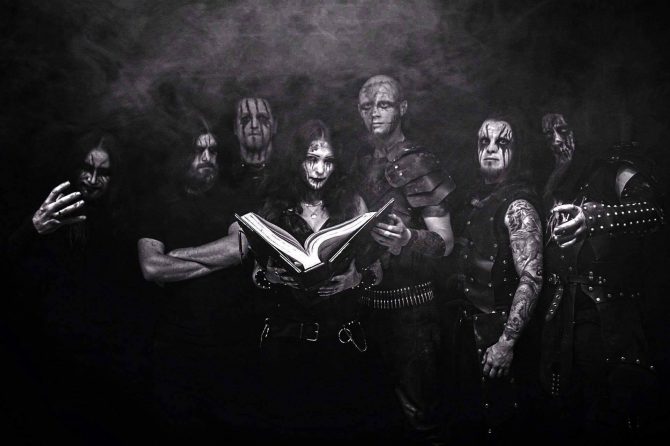 As a result, even if you’ve heard of one of these three acts before (and with the recent press furore over one in particular there’s a very good chance that will be the case) you should still be able to find some fresh new metallic morsels here to sink your teeth into. 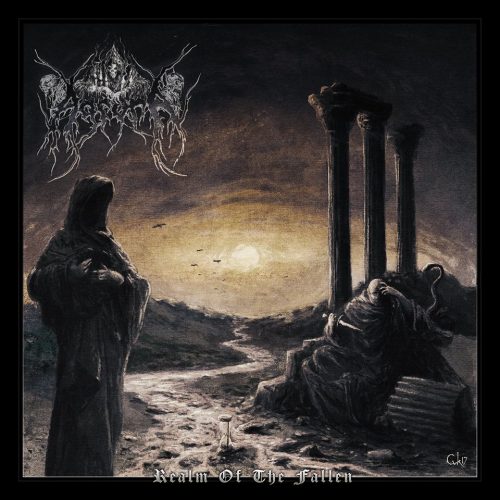 AGRONA – REALM OF THE FALLEN

While the debut album from this seven-piece Black Metal platoon may not offer much in the way of new or unique sounds – the shadow of both Dimmu Borgir and Dark Funeral looms large over pretty much every track – you can’t (or won’t be able to) deny that the execution is absolutely top-notch throughout, with numbers like grimly grandiose opener “The Treacherous Dead” and its heavier, more aggressive follow-up, “Apotheosis”, showcasing an effective and lethally efficient blend of devilish hooks, dark melody, and dense, almost Death Metal-ish heaviness, that reflects extremely well on the band’s already well-developed sense of song-craft and dynamics.

In that sense “I Chose to Burn” is a particular early highlight, showing off some incredibly catchy, but still punishingly heavy, riffage, as well as some great interplay and layering of lead/trem and rhythm guitar work, all backed up by a truly vicious percussive performance from drummer Ankou, while the addition of some suitably ostentatious clean vocals in “Storm’s End” makes for a welcome change of pace, even if they perhaps don’t quite reach the soaring heights of metallic majesty which they were clearly aiming for.

The pairing of “Immaterium” – a short, sharp, three-minute blastathon that pulls absolutely no punches – and the moodier, more intricately-arranged “Unbound” (another of the record’s stand-out tracks, which strongly reminds me of Horizon Ablaze in places), demonstrates that the Welsh group have clearly put a fair bit of thought into the structure and sequencing of this album (although settling for calling the first track “Intro” just seems unnecessarily lazy), thus ensuring that even if the material doesn’t always keep you on the edge of your seat, it still never fails to keep your attention fully occupied and engaged at all times.

Realm of the Fallen concludes with the demanding double-feature of “Risen” and “Summoning the Void” – the former a solid six-and-a-half minutes of hard-driving riffage and brooding keyboard embellishments, the latter a nearly eight-minute marathon of malevolent melodies, razor-sharp hooks, and shamelessly epic symphonics – which, while never exactly straying very far from the canonical roots of the genre, still ensure that the album finishes with one hell of an impressive, and emphatic, closing statement, particularly in the case of “Summoning…”, which also gives the band’s female vocalist a chance to cut loose… something which I’d very much like to hear more of in the future.

And although I’d argue that Agrona still have some growth and development to do in order to define a proper identity and sound of their own (and tightening up their line-up – as seven members seems a little excessive – probably wouldn’t hurt), overall this is a very strong debut from a young band with a whole heap of potential, and well worth checking out if you’re curious as to what the next generation of Black Metal stars might sound like. 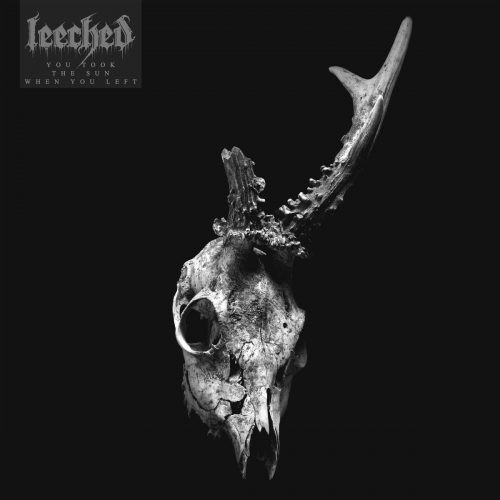 LEECHED – YOU TOOK THE SUN WHEN YOU LEFT

Of the three bands featured here Leeched are the most likely to be the most well-known, considering their rapid rise to (relative) fame over the last year or so, culminating in the release of this, their full-length debut, on no less a label than  Prosthetic Records, who clearly see big things ahead for this Mancunian three-piece.

If you’re not familiar with the band and their apoplexy-inducing, eye-poppingly aggressive blend of Metal and Hardcore ( call it Grindcore if you want, though I’m not entirely sure the label fits, especially considering the album’s morbidly doomy streak and penchant for injecting passages of ambient industrial waste where you least expect them), then allow me to offer up a few more familiar (and more famous) names as potential touchstones – Brutal Truth, Godflesh, Obituary– so that you can adequately prepare yourselves for the coming onslaught.

Opening with the abrasive, chug-heavy battery of “Cripple the Herd”, followed in swift succession by the punk-fuelled pummelling of “Rope” and the utterly monstrous “The Stone and the Steel”, You Took The Sun When You Left quickly establishes itself as one of the most relentless and violent albums of the year, bombarding your eardrums with explosive blasts of squalling, scraping, serrated noise in a way that frequently teeters on the edge of pure chaos.

Thankfully, the short and stripped-down nature of these tracks (which collectively clock in at just over four-and-a-half minutes) means that they manage to maintain their integrity by the virtue of sheer momentum, even if they often feel like they’re about to fly apart at the seams, and it’s this sense of unstoppable, irresistible momentum – always pushing forwards, faster, further… don’t stop… don’t look back… – which helps keep these early cuts on the rails.

Interestingly enough, however, the rest of the album opts for a much more fleshed-out approach (with only track #5, “Guilt”, clocking in at less than three minutes), leaving this opening triptych as something of an outlier when all is said and done, and perhaps indicative of the band’s desire to ease the listener in (relatively speaking of course) with something a little closer to their previous EP before showing all their cards.

And, it has to be said, the slightly longer format definitely allows Leeched room to stretch their tattered wings and to explore a number of different, though no less demanding, sonic textures – from the humongous grooves of “By The Factories”, to the throbbing mechanical pulse of “Guilt”, to the eerie atmospheric enhancements which punctuate “Raised By Lead” – in a way that only augments their already insufferably dense brand of uncompromising brutality.

Of course, killer cuts like the bone-crushing “A Mouth Full of Dirt” and the lurching, cripplingly-heavy title-track, are still as vile and as vicious as a trip to your local dog fighting arena, but, at the end of the day, it’s the intersplicing of these different elements – such as during the doomy, industrialised stomp of “Harrow the Pastures” – which truly makes You Took the Sun… more than the mere sum of its parts.

Is it perfect? Not quite, as there are still a few moments where the punches don’t quite land as hard (or as accurately) as they should, or where the band’s ambitious reach ever so slightly outstrips their grasp, but none of these issues should be considered a major deal-breaker, and I have absolutely no hesitation in stating that this is unquestionably and undeniably one of the best – and nastiest – debut albums of the year. 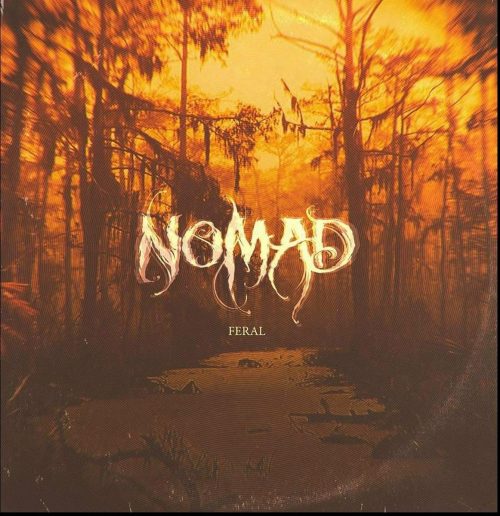 Let’s cut to the chase straight away, shall we? Feral is seven dirge-like slabs of sickeningly catchy Sludge-Doom replete with a bevy of meaty, muscular riffs practically thick enough to chew on, and an underlying sense of strutting groove that brooks no argument and no resistance. And if you don’t like it? Well then you know where you can shove it…

Truth be told, “Curse of the Sun” makes for a bit of a slow starter, and isn’t necessarily the strongest opener the band could have chosen, although its final few minutes feature a major increase in energy and intensity that marks the moment where the record really kicks into gear, slamming right into the straight-up slobberknocker that is “Feral”, the album’s rifftastic, groove-heavy title-track.

“Swarm” is just under seven minutes of rolling swagger and gritty, gravel-throated vocals, topped off with a healthy helping of bluesy, doomy melody, while “The War Is Never Over” is a simple (but effective) slab of face-punching riffage and throat-ruining roars that kicks in the door, flips over a few tables, and is gone well before the cops show up.

The epic “Culture of Ruin” is most probably the album’s high point, building from a sombre acoustic opening into a doomy monolith of massive guitars, gargantuan grooves, and electrifying melodies that stomps along for just under eight minutes like some lurching, drunken titan, before the pulse-pounding, riff-heavy rocker of “Feed”, and the groaning chugathon of “Shallow Fate” (another serious contender for the album’s best song), bring things to a suitably gnarly and neck-wrecking conclusion.

So if you’re looking for an album that will have you slamming shots, smashing bottles, and making a general nuisance of yourself – and aren’t afraid of spending a few nights in jail sleeping off the inevitable hangover – then get this one down your neck asap.