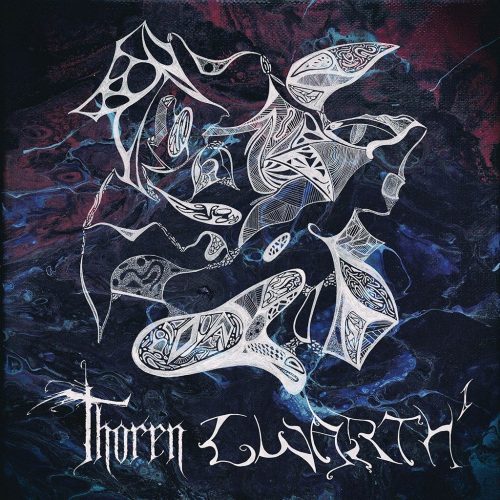 Roughly two years ago our friend and former NCS contributor Austin Weber presented our premiere of an album named Brenneburg by an instrumental trio from Michigan who call themselves Thoren. In attempting to capture the sensations of the music, Austin made frequent references to Dysrhythmia, while observing that Thoren “seem to be coming from an even more alien and discordant place than the off-the-wall realm where Dysrhythmia comfortably reside”.

Thoren have now recorded the first of a two-part sequence of albums named Gwarth, with Gwarth I scheduled for release on November 9th and Gwarth II projected for release next year. For the new album, Thoren guitarist Anthony Lipari and bassist Joseph Paquette enlisted the enthusiastic participation of not one but two session drummers, Alex Cohen (ex-Pyrrhon, Malignancy live) and Kenny Grohowski (Imperial Triumphant, Secret Chiefs3).

Yesterday DECIBEL premiered a track from Gwarth I named “Tyranny“. The introduction proposed this way of thinking about the music: “Throw Gorguts in a blender with Ulcerate, Replicant and Pyrrhon. Add a dash of Imperial Triumphant’s black metal craziness”. I don’t think I can improve on that by way of references. I’ll just say that this track is a destabilizing and hallucinatory combine of murderous brutality, pile-driving destructiveness, head-twisting discordance, and alien ambience. Unexpectedly, I find myself in thrall to it.

(Thanks to starkweather’s Rennie for alerting me to “Tyranny”.) 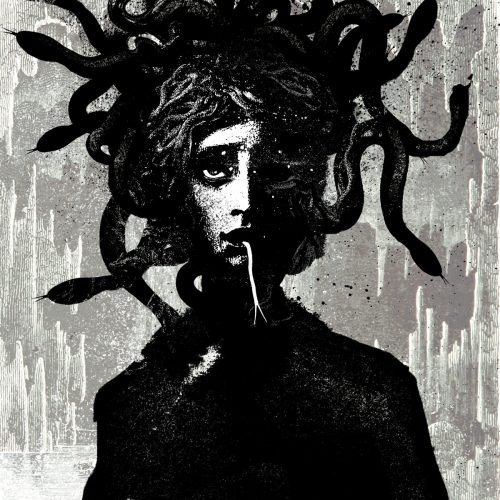 Vox Medusae is the eleventh album by a (mostly) one-man project from Baltimore named Potmos Hetoimos (the creation of one Matt Matheson), but is the source of my own first exposure to what PH is doing. A couple of things stood out to me before venturing into the music. The first was PH’s own attempt to craft a genre description: “prog/doom/jazz/ sludge/post-metal”. The second was this description of the new album’s conceptual underpinning:

[M]edusa, the temptress – an external(?) personification of the supreme object of lustful attraction and obsession

The [A]ddict – the true human struggling with his addiction

The [W]itness – impartial observer to the killer’s deeds

The [P]rophet – a conscience speaking truth, warning and encouragement

The [C]onqueror – valiant would-be slayer of the Medusa

You’ll find streams of three of the eight songs below. They don’t move in predictable directions, the manifold stylistic ingredients changing and falling into place in kaleidoscopic fashion. I wouldn’t call the changes chaotic, but they’re certainly sharp and surprising. It will help if you enjoy jazz and prog. It will also help if you enjoy being drugged and/or pistol-whipped. Also, the vocals, though chameleon-like, are relentlessly intense.

You can hammer your head with this music and move your body, and also fall into dreamlike reveries, experience expressions of agony and be lifted in exultation, find big smiles on your face and be left befuddled or aghast. Fascinating, exuberantly creative, technically impressive music for the adventurous-minded among you.

Vox Medusae will be released by Not Music on September 12th. The cover art is by Alex Eckman-Lawn.

(I again thank Rennie for recommending this.)

Attempting to provide a useful introduction to this next piece of music proved to be quite difficult, since all I had to go on was a single line accompanying a YouTube clip, and that line isn’t in the English language. With the aid of Google I did the best I could to decipher this small amount of information, and although I can’t guarantee that I’m correct, here’s what I think we’re listening to:

As best I can tell, this is a song named “Sataştım” performed at a concert or recital by a Turkmen woman named Mıllı Taçmırat. There are no vocals. She is performing the music on a two-stringed fretless instrument called the dutar, or in Turkish the komuz (though it seems the komuz usually includes three strings).

I discovered the YouTube clip when a Facebook acquaintance posted a status on his page, with a humorous comment by another of his friends, both of which I’ll quote below — and then I’ll just leave you to the music:

Me: I should probably go to bed.

Also Me: Yeah but the traditional music of Turkmenistan isn’t going to learn about itself. Better get started.

Comment: Funny thing about Turkmenistani music, it actually can learn about itself.