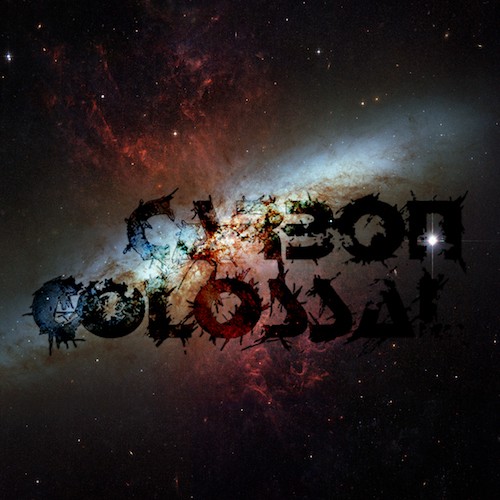 When Austin Weber reviewed the 2017 debut EP of Carbon Colossal for us he wrote, “The Disassembly of Earth is some sort of technical doom from hell, gone a death-metal-infused path, with fleeting blasts of black metal peppered in between all that… the three songs here forming an all-around vicious and ultra-dissonant heavy machine the likes of which show a ton of promise….”

This California duo (vocalist Llysywen and multi-instrumentalist Galaeth) have now recorded a debut album entitled Celestial Eels, which they have set for release on December 1st, and today we’re helping spread the word about a nightmarish album track called “A Gathering of Serpents“.

Although the track is nearly 10 minutes long, it never flags, nor runs any risk of losing its paralyzing grip on a listener’s sanity. It’s simply too shocking and too well-calculated to destabilize and invert rational thought for that. The music is a dissonant black/death fugue of madness and despair that both fucks with your inner ear and applies a hatchet to any sense of well-being that might comfort you in these dark times.

Within this building maelstrom of disorder there are moments when the music gives you something to hang onto, a few life rafts in this sea of derangement, perhaps just enough to keep you from drowning in torment, but not many. This harrowing trip begins with sickening, seething guitar noise and thudding low-frequency reverberations, too unpredictable and widely spaced to set up any rhythmic resonance, coupled with ghastly gagging vocalizations and with the sounds of screeching and moaning strings.

Eventually one of those life rafts appears, in the form of a lurching drum-and-bass rhythm, but it’s joined to a queasy, hallucinatory melody that puts your teeth on edge, and to wrenching shrieks of pure agony. The drumming picks up the pace, eventually erupting in blasting bursts, but the guitar torture becomes even more deranged, discordant, and harrowingly frenzied, the vocals even more shattering in their pain.

The mania briefly subsides… the guitars and bass continue to vibrate like paranormal snakes… a lurching rhythm returns, but the guitars and vocals continue to warp and pour out lunatic torment. There’s more percussive blasting and bass clanging to come, pierced by peals of unnerving guitar discordance, along with a buzzing, pestilential riff and a cacophony of horrid roars, excruciating howls, and lacerating screams.

All is not discordance, however, and in that sense one final life raft bobs into view — a chiming melody over a slow drum tumble that helps carry the song to its end. But that melody offers no hope, only the sound of desolation and grief.

“A Gathering of Serpents” is the opening track of an album that includes five more compositions. We are both frightened and eager to hear them. You can pre-order the album as a Bandcamp digital release now. The final artwork will be revealed in November.

One Response to “AN NCS PREMIERE: CARBON COLOSSAL — “A GATHERING OF SERPENTS””