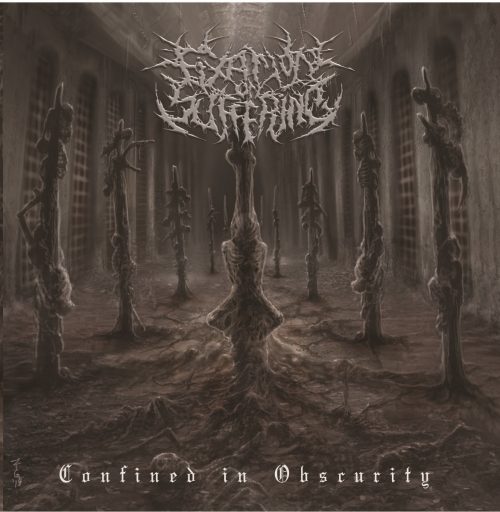 (This is Vonlughlio’s review of the debut album by the Spanish brutal death metal band Fixation On Suffering, which is set for release by Pathologically Explicit Recordings on October 28, 2018, but is streaming at Bandcamp now.)

This Sunday sitting in my favorite chair I am listening to some new albums, including the one I am going to talk about today by a new band (formed in 2016) called Fixation On Suffering. They hail from Spain and are signed to Pathologically Explicit Recordings.

This band made their debut back in 2017 with their EP Relevation of Tortured Imprisioment. It showcased a level of musicianship that was well-respected in the scene, and vocals that got the job done. This 15-minute EP was a good one, and made me look forward to new music, though I felt it did not get the promotion it needed and faded away behind so many other releases. So if you can, dear reader, give it a listen. 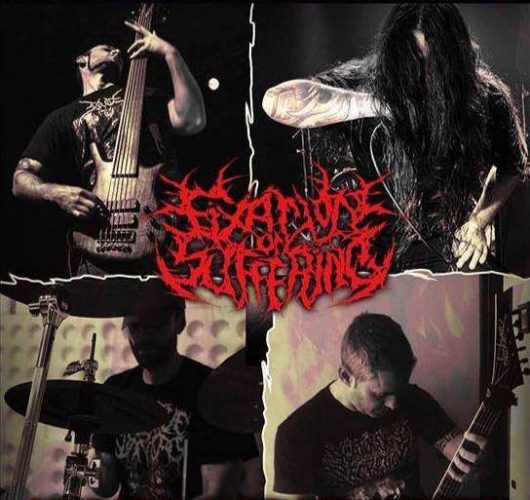 After that, the band signed with ther current label (which I feel is a better fit — Fernando is well-respected in the scene for his hard work, and believes in the bands in his roster).  But Disjorge (bass), Abur (drums) and Prof. Oscar (guitars) found themselves without a vocalist. So what did they do??? They get one of the best in the BDM genre, none other than Paolo Chiti (Devangelic, Antropofagus). I remember that I was with family when I learned the news, and everyone heard me shout “Holy Fuck!!!!”, so yeah that went well (another story for another day).

Months went by and there were no updates regarding the debut album, but suddenly they released the cover art and then a single, “Corridors of Lacerated Confinement”, and that was all I needed to order the album right there. The natural production, the changing riffs, the unsung heroics of the bass, and vocals to die for!!!!!

And after that, boom!!!!, out of the blue the album was released for streaming on the label’s Bandcamp. Naturally, I stopped everything to go and listen. Making Paolo their vocalist was a wise decision, because he obviously takes time to listen carefully to the music and to come up with vocal patterns that are unique and never repeat themselves. Oscar is a riff machine, so good that he’s probably able to come up with them in his sleep. With all the projects he is involved in, he makes his riffs unique and yet with a signature sound.

Each of the songs on the new album shine, each one its own story. And once again, the bass and drums are unsung heros in these efforts. The voracious, precision blast beasts give the music power and depth, and the bass creeps up in some sections of the songs in a way that adds originality and an even lower sound.

This 32-minute BDM masterpiece is among the best in the genre for 2018, and a perfect example of why I love the genre of BDM itself. The album is a non-stop mid-tempo fury that makes the listener equally angry (and you’ll headbang even if you are alone).

So if you like BDM or want to give the genre a chance, listen to this album (you won’t regret it):