Abjection is an appropriate sign under which this reaction to Esoctrilihum’s album, Inhüma, should be convened. The work represents a threat — a breakdown of the apparently clear strapping and structures of a consensus reality. The violence of the occult-agrarian, the protohistory of sacrifice, of bloodied fields, serve as auspex: this is a harrowing; a threshing through which preconceived meaning is grist for the machinations of the ritualist — it is taken apart, buried in the soil, and grown into things that horrify and make reality itself alien and other. 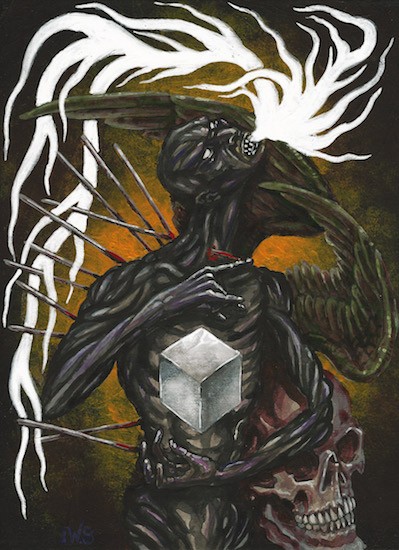 Each of these tracks has within it the seed of its own micro-universe as well as traces of belonging to the larger weird cosmos Asthâghul summoned first in Pandaemorthium. The fables or histories presented also weave together a pantheon of murky, obscured, but utterly hideous figures from corrupt necromancers and dead gods to strange labyrinths and onyx cities. And the music renders these landscapes and personae in vivid detail. Entering the desert and crossing the abyss. A clear sense of emerging from the depths of the some cthonic maze to a desert plain below a crescent moon. The ominousness of something cursed and diseased sweeping across the world. Twisted, serpentine invocations allowing something in which should be kept out. And throughout, the repercussions and consequences of pacts and bargains with unspeakable things.

This is a huge work of multiple dimensions: strange parallel mythologies, deep melodicism, a massive sweep of narrative arc and sonic direction. Despite the uncanny and decentring weirdness of these strange tales, the potential listener should not be dissuaded — there is, just as with Asthâghul’s orthography, a classic unheimlich familiarity to all of it — like something you have heard and yet have not. Whether this adds to the sense of discomfiture or not, it means that the music is accessible… it will just bring you to very strange and perilous places, lulling the listener into a false sense of security.

Inhüma also represents, to my mind, a real concatenation and solidification of all the power and presence evoked in Asthâghul’s two earlier albums. This is mesmerizing and beautiful music that does not sacrifice aesthetics for some veneer of noisy strangeness. His introduction of string passages in several tracks is seamless and adds to the eerie atmospherics by an order of magnitude. Share these feverish dreams and let the visions wash over you like a drowning tide of darkness.

This, then, is the ultimate, that is only, consolation: simply that someone shares some of your own feelings and has made of these a work of art which you have the insight, sensitivity, and — like it or not — peculiar set of experiences to appreciate. Amazing thing to say, the consolation of horror in art is that it actually intensifies our panic, loudens it on the sounding-board of our horror-hollowed hearts, turns terror up full blast, all the while reaching for that perfect and deafening amplitude at which we may dance to the bizarre music of our own misery.