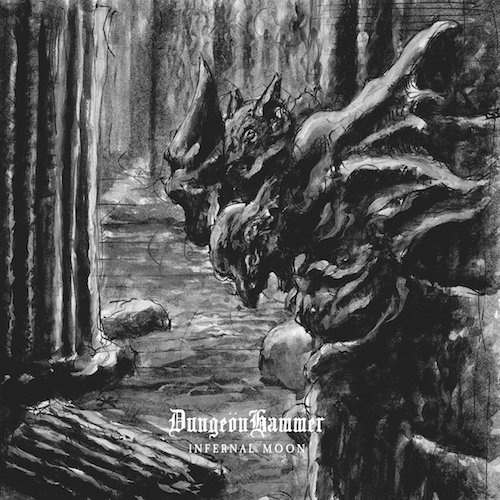 To begin, a confession: When we premiere individual songs from forthcoming albums or EPs, we usually haven’t yet listened to the entire record — not from lack of desire, but due to lack of time. In the case of today’s premiere I made a partial exception. This new DungeönHammer song turned out to be a short one, but so damned good that I felt a strong urge to find out what else they were capable of. And so I listened to the three other tracks from their debut album that had surfaced before the one we’re bringing you today, and came away even more impressed (and also surprised). I’ll get to those, but first, let’s talk about “Sworn In Blood“.

This newest track is one of eight on DungeönHammer’s full-length debut, Infernal Moon. True to the press descriptions, it hearkens back to an earlier age, a kind of proto-black-thrash, but more rocking than thrashing, and evil as hell. It’s not really speed metal mayhem, but more the kind of primal filthiness that your head and neck will respond to, from beginning to its too-soon end. 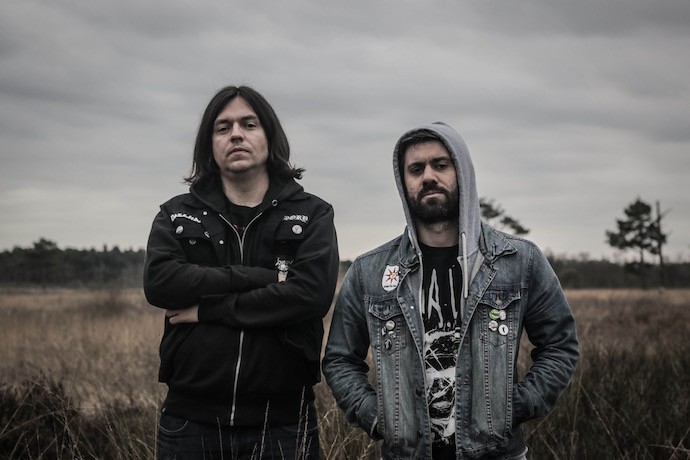 The main riff in “Sworn In Blood” is a nasty one. Melodically, it starts low and moves higher, and the sound is deeply sinister, while the bounding and rocking beats are primitive but irresistible. There’s a pretty “organic” sound to the music, too, not a lot of reverb and just enough distortion to let you know the music hasn’t had a bath or shaved in a couple weeks — definitely not well-groomed music, and hail Satan for that. Meanwhile, the vocals are raw and foul, expelled with a bellyful of venom from a throat seemingly choked with hate, the words scorching the brain like a blowtorch.

And yes, it ends too soon, which is what propelled me on to the other three tracks that are now available for streaming, all of which turn out to display the same fiendish gift for getting your head moving, albeit in different ways. “Empire De La Mort” is similar in its pacing and mechanics to “Sworn In Blood”, but with a sulphurous slithering and wailing solo to add extra spice.

On the other hand, the other two songs will help you understand why “Dungeon” is a prominent part of this band’s name. “Perpetual Funeral Winds” begins and ends with slow, spooky, hypnotic guitar instrumentals, and in between you’ll be treated to a devil-eyed piece of mid-paced lurching cruelty and lust (with another delicious solo), while “Ad Infinitum” (the longest song on the album at more than 7 minutes) is also a lurching, mid-paced horror — thuggish, dismal, and malignant to the point of ghastliness, with a slow, queasy solo that oozes disease, and seamlessly transitions into an acoustic finale.

What’s my next move? It should be obvious by now. As soon as I finish everything else I have to do for NCS today, I’m going to listen to the other four tracks on this album. I already have no doubt that I’ll eat them up with both hands.

DungeönHammer is a duo, one man French, the other one Dutch, the two of them having met in 2005 while studying together in Milan, Italy. Discovering that they shared a passion for the old metal sounds of early thrash and speed metal from the ’80s, they eventually began collaborating on what has now matured into the highly addictive gifts of Infernal Moon.

The album will be released on October 12th by Pulverised Records, with vinyl treatment coming via Me Saco Un Ojo Records. The album cover was created by the great Timo Ketola (Watain, Deathspell Omega, Antaeus, Krypts, and many more).

Enjoy our premiere below, along with those other three tracks.

2 Responses to “AN NCS PREMIERE: DUNGEÖNHAMMER — “SWORN IN BLOOD””