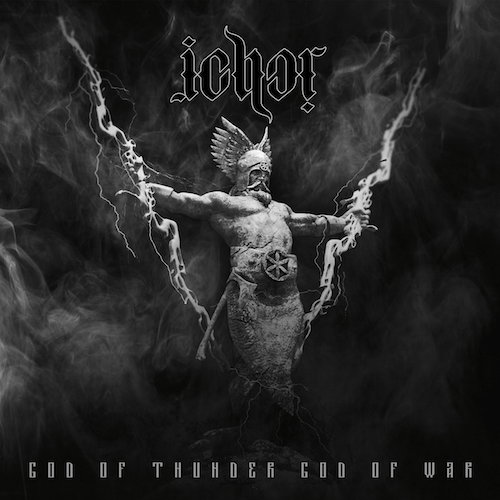 There is no escaping the long shadow of the Australian black metal band Nazxul in introducing Ichor and their debut album, God of Thunder God of War, which will be released by Seance Records on October 5th. The two members of Ichor — Wraith and Diablore — actually started the band in 1993, but put Ichor aside, after recording a demo, in order to focus on Nazxul, in which Wraith has been involved continuously since the beginning and in which Diablore (under the name Dalibor) was also an original member. In 2017 they decided to revive Ichor, and the results of their collaboration are what you’re about to hear.

We’re told that tehse two chose the name Ichor, the ancient Greek word for the fluid that runs in the gods’ veins, to express the concept that the only difference between humanity and the gods is a physical substance or principal, signifying that humanity can rise to the ranks of gods. But while the ancient Greeks may have furnished the name, this first album thematically focuses on Slavic paganism.

Comparisons will be drawn to the music of Naxzul, and for fans devoted to that band it might be welcomed as a sign of life, given the passage of eight years since the last Naxzul release. But I’ll make no comparisons here — this album stands alone, like a beacon of terrible darkness, that irresistibly draws the listener to it, body and soul, and into an unreal world where terrible calamity, wrenching agony, and towering magnificence co-exist on a mythic scale. The album is indeed so immersive and so emotionally powerful that it banishes all thoughts of the mundane and sweeps the listener into the haunting and harrowing realm of saga.

The sound in these songs is dense and enveloping, the melodies tending to move in slow, sweeping waves of roiling guitar abrasion and mystical, elevated ambient wash. The moods change; the method of establishing them is centered on that strategy of consuming the listener’s senses. On the other hand, the vocals are relentlessly intense — a vicious, scalding, throat-ripping sound that becomes the channel for ferocious terrors.

Because the sweeping, atmospheric quality of the music is so integral to Ichor’s approach (as opposed to a more riff-based approach), it puts special weight on the drumming to create dynamism in the songs, to push and pull the physical momentum, which in itself contributes to the changes in mood between mortifying gloom, soul-flensing despair, and the ascendance of grim majesty. And fortunately, the drumming on the album is really excellent.

The first two songs on the album quickly demonstrate these qualities. “Spectres of the Woods” is heart-rending and cold, dramatic and magisterial, those frightening vocals contrasting with the somber waves of melody. Peals of eerie tonality, both wraithlike and groaning, emerge over the rumble of distant thunder, and the melodic reverberations of intense grief rise like lost spirits. In this song, the drumming is methodical, head-nodding; the rhythms change, but are mainly slow and even stately, with only occasional lightning-quick bursts of frenzy.

On the other hand, the second track, “Noble Ichor”, erupts with the electrifying clatter of blasting drums and hammering bass, matched against those gradually-moving waves of desolate melody. The penetrating rise and fall of the lead guitar becomes a voice of agony in the midst of a storm-tossed ocean of gloom, and the song builds to a crescendo of all-consuming calamity, the melody soaring even higher on columns of grief.

The third track, “Vucica“, embodies the atmospheres of both crushing lament and apocalyptic disaster within its confines, separated by a rhythm-less miasma of nightmarish ambient sound and deep, distorted voices, and ending just after a melodic measure that soars and dives in a way that seems to capture the hopeless ascent and devastating descent of winged Icarus. And to continue such contrasts, “Call of the Bloodthirst” is rampant intensity (both dismal and heroic), while “Yaga’s Tomb” is slow, dank, ominous, and oppressive, the lead guitar in that one generating the sound of forlorn yet frightful phantasms.

The final song, “Daughters of Wrath“, is a re-recorded version of a track off Ichor’s first demo from many decades past. It becomes music of incinerating intensity, with interludes of dancing, swirling… witchery.

An album this good should not be a one-and-done affair, and therefore I’m happy to say, and hope you will be happy to read, that Ichor are currently working on new material, and will be an ongoing band. The usual links are below, followed by the full album stream.

5 Responses to “AN NCS ALBUM PREMIERE (AND A REVIEW): ICHOR — “GOD OF THUNDER GOD OF WAR””