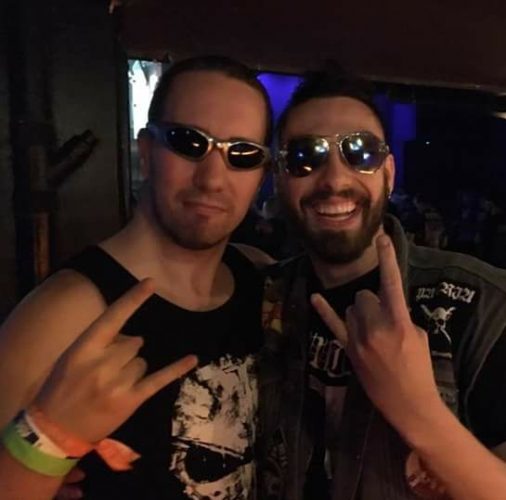 This provoked a Facebook status by my NCS colleague Andy Synn. By the time I saw it, it had drawn a large number of comments and exchanges, and one of those dialogues was with our mutual friend and former NCS scribe Joseph Schafer (who now writes for such publications and sites as DECIBEL and Noisey, after a stint as Invisible Oranges‘ editor).

I found their discussion interesting and entertaining, and secured their permission for me to publish it here, with only minimal editing.  Of course, our readers should please feel free to continue this discussion in the Comments to this post.

Andy: Damn, that “Death of genres” article is absolute hogwash.

People of all different walks of life have been going to the same gigs, and enjoying the same music, ever since… well, ever.

Genres/styles exist for many reasons, one of which is that artists CHOOSE to work within them, to work WITH them (both as medium and as tool), and to use them as boundaries within which to explore (which sounds contradictory… but then, that’s partly the point), and define themselves. And this straw-man argument about “fans” only thinking they can listen to one style of music is only accurate in a minority of cases, and was played out a LONG time ago.

Ultimately, while I’m glad the writer found a new band he liked, extrapolating from that into “the future is going to be completely genre-less” is just nonsense.

Not only does this completely ignore the role of the artists themselves in CHOOSING what type of music they want to play (whether strictly defined, genre-mashing, or whatever), but it conveniently ignores the fact that just jamming genres together because you want to show everyone how eclectic you are mostly just results in a flavourless, directionless, mush that’s a jack of all trades, and master of none.

TLDR version – enthusiastic article makes wild claims with nothing but wishful thinking to back it up.

Joseph:  The article is poorly written, but it’s difficult to argue that the proliferation of subgenres has resulted in notable creative straightjacketing.

Yes there’s an appetite on the side of artists and fans wanting further exploration within the confines of established styles (throw a rock and hit an OSDM band that’s less than five years old … ).

However, there is also a prolific appetite for innovation that is not being addressed. There’s definitely an appetite for the new and innovative in terms of sonic palate that’s easy to find in comments, groups, interviews, etc. I’m not saying mashing together genres is the way to get to that innovation – but I do think close conscription to well-sketched preexisting styles will likewise fail to achieve that innovation.

Andy:  But, again, straw-man argument. “Close conscription to existing styles” doesn’t sum up the entire music scene. Ever since… whenever… there have been bands pushing the boundaries, expanding genres, etc… and NONE of it has ever resulted in “the death of genres”. And I’d argue that the prolific appetite for innovation IS being addressed. I can throw a rock and hit lots of bands doing that. I just don’t see this straightjacketing you’re talking about at all.

I do think that maybe we’re coming at the same problem from two different perspectives here. In particular, you differentiate between innovation “within” styles, and innovation… in some other way. And I’d posit that one of the issues is that far too often (though certainly not always) the artists who do try and do it the other way, who try and do multiple genres in an attempt to be innovative, do so by being just “pretty good” at multiple things – jack of all trades, master of none, and all that. Whereas being innovative “within” a style often goes hand-in-hand with already being very good at that style, and then going further… so I’d argue they’re working from a better base.

Basically you can’t really innovate successfully unless you know who you are.

Joseph: I mean, to an extent you have a point, but at no point in time did I say that close conscription to current styles summed up the totality of the scene (obviously it doesn’t – e.g., Zeal and Ardor) OR that all the bands exploring a single style are failing at innovation (obviously some are – e.g., Tomb Mold, Blood Incantation, one could go on and on) OR that the way to innovate is to mash disparate styles together (too many failed prog metal acts to count).

Frankly I think subgenres have a limited utility – they’re useful until they are not.

I also need to push back at this idea that there is no straightjacketing on some people’s part. If you’re looking for examples of straightjacketing, you don’t need to look that hard. I’ve interviewed two pretty great bands this year (Horrendous and Skeletonwitch) who have expressed a feeling of being constrained into a single style by the expectations of their fans (Horrendous) or past band members (Skeletonwitch). I think those are two relatively innovative groups – but I doubt that either is going to “end” genres.

I DO think those are both bands that know who they “are” – probably better than their fans do.

Andy:  I just felt you swung a bit wide with your opening statement about how it’s “difficult to argue”, when… it isn’t.

Also, Zeal and Ardor aren’t the best example imo in that they’re nowhere near as innovative as people say they are (the idea is, but the execution doesn’t show any of the same innovation). And that’s not meant to attack the bad, or their fans. It’s just that, from my perspective, the hype about them distracts from the lack of substance.

Totally agree on sub-genres having only a limited utility though. As always, it’s HOW they’re used which makes the difference. And a bad workman, one who can’t work WITH them, always blames his tools.

I like your expansion on the straightjacketing issue though – bands feeling straightjacketed by the expectations of their fans is a slightly different (though still totally valid) point. But I’d argue that it’s something ALL bands have to deal with in their own way, and something which CAN be dealt with if you’re smart about it.

Joseph:  I like the new Zeal and Ardor LP – but there’s a bit of an imbalance between the elevator pitch (great!) and the execution (a handful of great songs, and a lot of filler). What you see there, though, is how quickly people will jump onto something that’s a little unexpected! In a sufficiently innovative environment, I think Zeal and Ardor would not have jumped from Bandcamp release to international 1000 room headliner in ~2 years.

You’re definitely right about bands dealing with fan expectations, though.

The tougher nut to me is when you get, say, a group of dudes who only want to sound like Black Sabbath playing to people who only want to hear bands that sound like Black Sabbath, and the whole circuit’s closed. It’s not a problem — it’s just kind of boring! I think I’ve heard you say similar things about my beloved — what was it? — army of interchangeable grind acts?

Andy:  Hey, if it wasn’t for that army… who would we watch at Soundstage???

And you know I actually agree with you on that last point.

As for Zeal and Ardor, I think we interpret this thing differently. I agree that their album is a handful of really good tracks, surrounded by quite a bit of filler, but I don’t necessarily see their success as a sign of people being hungry for innovation, but more a result of labels and/or the media being hungry for anything they can market as innovative, regardless of how good it is. Which, I think, is a subtle but important distinction.

Joseph:  You may have a point there. I think at the outset, before the release was picked up, it generated a whole lot of attention really quickly, but some of that can probably be attributed to the right people pushing it at the right outlets at the right time (Kim, Noisey, when there was nothing else notable sucking up the bandwidth). Other acts have had kind of the same thing — Death Grips wouldn’t be a big act were it not for Anthony Fantano (The Needledrop) giving their unsigned first album his first ten (I think? I haven’t checked but that’s my recollection) just when he was getting popular. So yeah, innovative act with a half-baked sound and a few good tunes can get big fast if there’s a good narrative, sure.

That doesn’t help me with these fucking old school doom guys, though. What makes it worse is that a solid third of the time… I kinda like it? I just can’t ever remember which song I like by which band because everything’s so fucking homogenized that it’s all just ok, even if some of the songs in a vacuum are really good.

Andy:  I think it’s possible to do something that’s very familiar with a distinct “voice”… but not as common as it should be.

I’d like to add one point, but not really discuss it since we have other things to do, but I think it’s worth mentioning. The original article is centered around these underground hip-hop acts that have overt metal influences. I support that as an idea in a vacuum, and I think one good thing for bands to do in a world where acts outside of metal are expressing an interest in the genre would be to collaborate. Record splits with these artists. Perform shows with these artists. Tour with artists outside of the genre. Instead of a world without genre, why not aim for a world where the various genres intermingle in a cosmopolitan way? Mobb Deep did play Maryland Deathfest, after all…

15 Responses to “A DIALOGUE ON THE “DEATH OF GENRES””