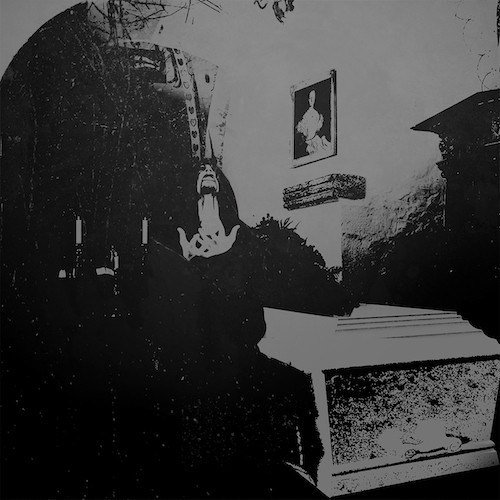 Many of the more adventurous and steel-nerved among you will have already discovered the terrible wonders to be found in the music of Pa Vesh En. After all, in 2018 alone this remarkable black metal project from Belarus has already released through Iron Bonehead Productions the Dead Womb demo, a two-song 7″ named A Ghost, and a split album with Temple Moon. But all of those recordings were preludes to what you’re about to hear, a debut album named Church of Bones that Iron Bonehead will release on October 12th.

As the album’s title might suggest, these seven tracks sound as if they were recorded in a vast sepulcher far beneath the surface of the earth, all the shuddering and shattering tonalities drenched in reverb, the music profoundly haunting and deeply oppressive in the weight of the desolation it conveys. The album is sweeping in the scale of its apocalyptic grief and shattering in the intensity of the pain it channels into sound — an expression of emotional collapse that’s so profound it begins to seem majestic, an intense and immersive experience so all-consuming that it swallows up the listener, as if engulfed by the maw of a leviathan.

Pa Vesh En‘s talent for blending spectral (or celestial) otherworldiness and enormous, voidlike depth becomes manifest immediately in “The Wilderness of Cursed Souls“, which opens the album. The music here is frightening, hallucinatory, destabilizing, and yet hypnotic. It creates an atmosphere of terrible grandeur and implacable menace.

Following an intro consisting of a perilous miasma of dense roiling sound and occasional whiplash strikes, you feel a huge ominous, undercurrent of sound with a slow heaving pulse that loops through the track, and your mind is assaulted by a blizzard of boiling riffs and flickering leads that rise and fall in intensity. Nearly submerged, the drumwork alternates between bursts of maniacal frenzy and slow gun-shot strikes. There is alternation in the vocals as well — a mix of incinerating shrieks (the violent expressions of a mind that has seemingly lost all its moorings) and the echo of distant clean vocals (somewhere between a chant and an emanation of gothic horror).

The signal tonalities of that opening track — the enormity of the bass vibrations, the flensing gales of guitar distortion, the riveting snap of the snare which sometimes anchors these creations, the mind-abrading shrieks and wild, exsanguinating cries, the unearthly echoing quality of the music as a whole — all of those ingredients provide the foundation for all the other musical imaginings to come. You perceive them through murk and mist; they resonate in your bones and haunt your mind.

An aura of pain and pitiless gloom surrounds “A Funeral Procession”, which contains a dismal, slowly slithering melodic current and shards of spectral wailing, and “La Valse Macabra” indeed proves to be macabre and dreamlike, its long chord reverberations exuding a feeling of anguish, and its sweeping guitar vibrations seeming to gleam in their bitterness

Slow at first, with blaring, abrasive sounds at the outset, “Pale Body Desecration” becomes a calamitous experience, filled with tension and torment, as well as desolating depressiveness and sensations of broken grandeur. Agonized and dramatic, “The Venom Seed” builds to a rush, as boiling riffs send the song toward heights of shattering pain.

The flickering sounds of a violin and the slow moaning of cello strings (or something that sounds like them) accent “My Obscure Obsession”, which also begins at a ponderous pace, but becomes more intense and more vast in its conveyance of grief and gloom. And to close the album, “With Pain He Waits in Vain” is utterly unearthly, a mix of warbling electronic ones and the piercing chime of plague-stricken organ chords that’s solemn and luminous, but just as laden with the wreckage of loss and the looming immensity of death as everything else.

If you’re looking for music that’s so powerful in its expression of its creator’s unsettling visions that you become part of them, look no further.

One Response to “AN NCS ALBUM PREMIERE (AND A REVIEW): PA VESH EN — “CHURCH OF BONES””