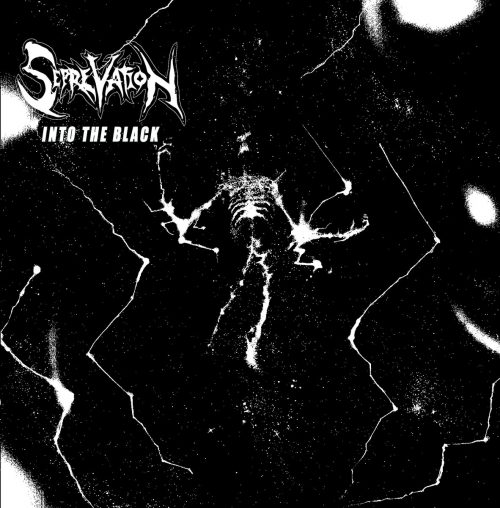 (Andy Synn reviews the new EP by the English death metal band Seprevation, which was released on September 9th.)

The last time we checked in on Bristolian Death/Thrash droogs Seprevation was… just over a year ago, when they released their Echoes of Mercy EP (and you can read all about that here).

Luckily they haven’t been resting on their laurels in the intervening time, and have not only been gigging their collective arses off, up and down the country, but have also spent some time putting together this brand new collection of sonic savagery which I’m pleased to be able to draw your attention to today.

One thing you’ll likely notice almost immediately is that the stripped-down, throat-ripping nature of the material showcased on this EP gives several of the songs an almost Grindcore-like feel, particularly bone-crushingly brutal opener “Ripping Holy Flesh” and the punk-fuelled, hyper-thrash attack of the title-track, making Into the Black an even more aggressive, and even more abrasive, listening experience than any of its predecessors.

That doesn’t mean, of course, that the band have abandoned their previous sound by any means, and caustic cuts like “Scavengers of the Dusk” and “In the Fog” contribute a virulent dose of heavy, chugging groove, and frantic, thrashy shred, to the mix as well, which helps to bring some much-needed balance to the force in the process.

The cornerstone of the album, however, is clearly the merciless “Draped Over Tombstones”, which is equal parts early Sepultura and classic Cannibal Corpse, and which finds the Bristol berserkers pushing their sound right into the danger zone, and teetering on the edge of overload.

But, let’s face it, you wouldn’t be here right now if you weren’t looking for something at least a little bit “extreme”, would you?

Anyway, you can grab yourselves a copy of Into the Black, along with the rest of the band’s back-catalogue, at the link below, and I urge you to do so at your earliest convenience.