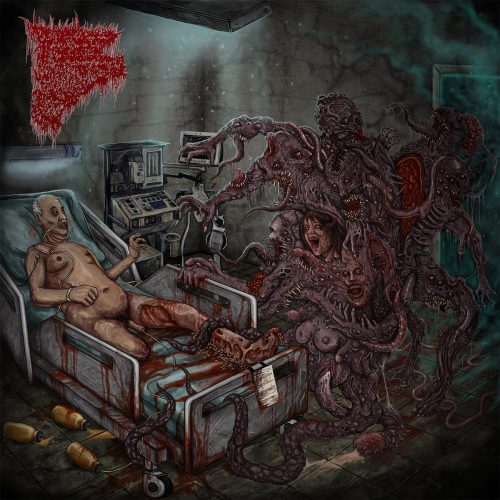 (For your disgusting pleasure, Vonlughlio reviews the debut album by the sickos in Insidious Squelching Penetration.)

As I mentioned in my last small write-up, for me 2018 has been a good year for music, especially in the BDM genre. I’ve particularly enjoyed discovering bands that came out of nowhere to blow me away with their releases, including Galvanizer and The Heretics Fork. Just wonderful music that keeps the listener engaged for every second. Such is also the case for this band called Insidious Squelching Penetration and their debut album, Writhing in Darkness, which was released October 12th via Lord of the Sick Recordings.

I first found out about the band thanks to a FB post from the label promoting their demo Delectable Rectal Mind, so I decided to check it out and bought it from the band soon after. This demo had the rawness I like in Goregrind and a straightforward approach, with songs below the one-minute mark (which is typical in this genre). The vocals went hand-in-hand with the music, and reminded me of Last Days of Humanity.

So when I heard the news about the full-length, I was excited to discover what the band had created — though I was also somewhat worried. A lot of bands put out great demos or EPs, and then record full-length debuts that just don’t stack up to the hype. Rest assured that this is not the case for this band, and Lord of the Sick has been proven astute in signing them, since the debut album continues where they left off in their demo. The production is just a tad better, but still raw, and preserves the sound with which I fell in love.

The songs maintain the same in-your-face strategy, with only one-third of them exceeding one minute in length and none exceeding two minutes. They are precise and effective in delivering the sound that makes you want mosh (even if you are alone). It’s a great stress reliever (at least for me). The music and vocals match perfectly as they perform together in what has become one of my favorite Goregrind releases (alongside the music of Australia’s Rawhead).

Nevertheless, despite their compact length, the songs include riffs that change and keep the listener engaged, sometimes changing in ways that can take one by surprise, alongside sharp drumming that adds more depth to the disgusting vocals, which do sound as if the person was seriously sick during the recording sessions.  The cover art and the song titles make you feel part of an NC-17 horror movie, and combine with the music to make clear that there is no escaping the brutal ending of existence.

I really enjoyed this release, and it surely will be among my top picks of 2018. So, if you feel like listening to some very good Goregrind, give this band a chance.