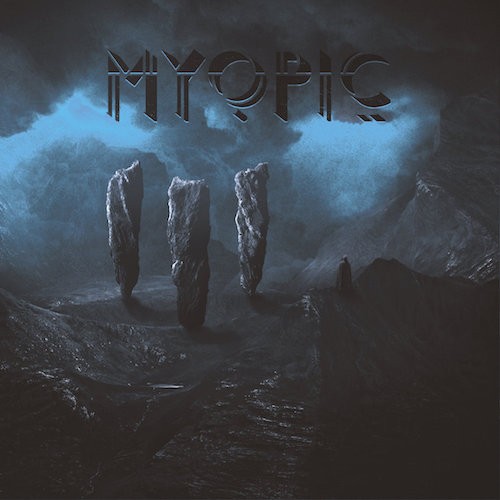 The new self-titled album by the D.C.-based trio Myopic “tells the experience of a man wandering in a deserted earth, and near the end he finds the massive remains of an ancient civilization still standing, a monument of the past”. As the band go on to tell us, the track we’re about to premiere — “Pillars of Time” — captures that moment, which is also the inspiration for the record’s cover art, created by Casey Drogin.

The band’s description of the protagonist’s discovery, coupled with the visual imagery, creates a frightening vision of desolation and hopelessness. Entering the story at this moment, we don’t know what has left the planet a barren and lonely place, or what catastrophe has reduced a once prideful civilization to nothing more than those cold, hulking derelicts. But through the music we can feel the combination of raw, devastating emotions that such a terrible discovery might ignite. 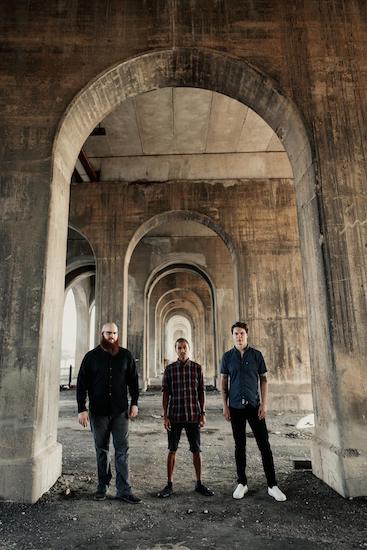 It’s fitting that a journey lies at the heart of the album’s narrative, because Myopic have themselves been on a musical journey that has seen their sound transform over time, moving from death metal to black metal to a place, now represented by this debut album, where the music is more difficult to pin down in genre terms; their label, Grimoire Records, describes the music at a high level as progressive post-metal, but that doesn’t fully capture what’s going on in this album, or in this song — which even considered in isolation is itself a journey.

There’s a significant difference between the way the song begins and the way it ends. At first, it proceeds at a slow, stomping pace, with a heavy, sludgy low-end providing the foundation for blaring chords and shards of dissonant melody. With that introduction, a mood of unnerving isolation comes over the song through the advent of eerie, gloomy guitar reverberations and the kind of raw, wretched vocals that seem to channel a mixture of both agony and disgust.

Clean vocals join in with the harsh ones, giving hints of bereft beauty to this experience of oppression and misery. Drum detonations fall like ax blows across the back of the quivering, nerve-abrading guitars, and then boom and tumble in companionship with craggy bass notes. The music transforms again, mounting toward that very different place from where the song began.

The drums jump into a battering flurry as a dismal, distorted melody slowly rings out like the sound of stricken trumpets and the vocalist shreds his throat in spasms of pain. And then the music reaches new heights of emotional and sonic intensity, driven by double-bass pummeling and smashing snare strikes, with the guitars flickering and flaring, setting fire to the song before its ultimate collapses in a long wave of ominous droning and warbling tones.

Like the words and the artwork, the track is desolate and hopeless, wrenching and vast, a reflection of ruin and the catastrophic costs of hubris, the kind of music that can haunt the mind long after it has ended.

Grimoire Records will release Myopic worldwide on November 9th. It was recorded, mixed, and mastered, by label owner Noel Mueller, and it’s available for pre-order now. To give you a further idea of what the album holds in store, we’ve included a stream of the previously released track, “Earth’s Mantle”, in addition to our premiere of “Pillars of Time“.